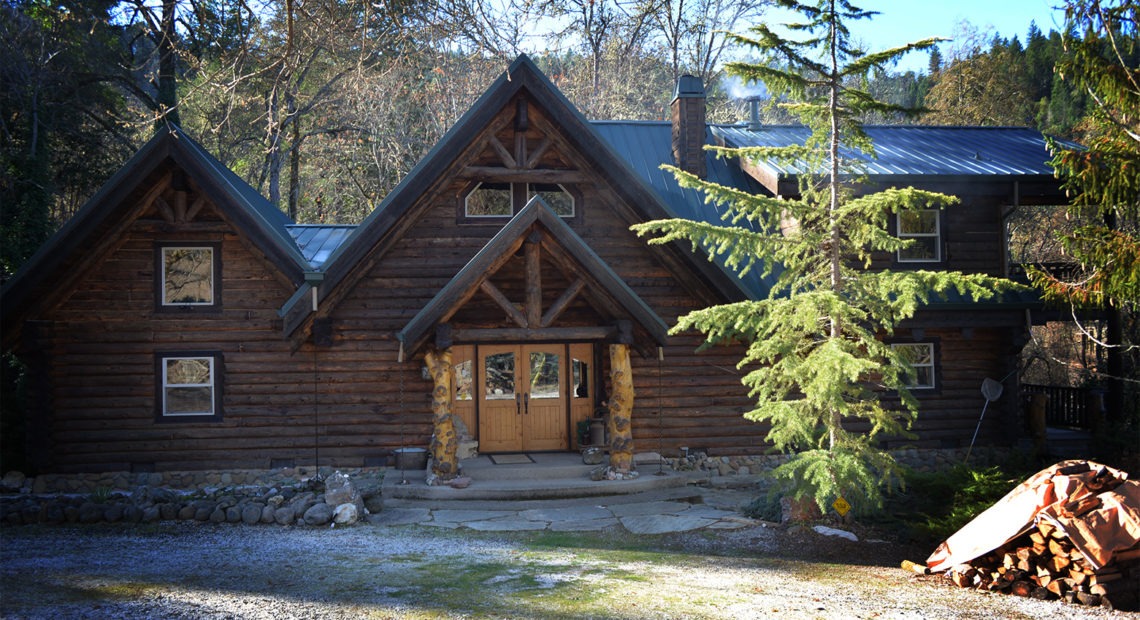 It’s been a little over a year since the Camp Fire destroyed the town of Paradise, which impacted thousands of lives in Northern California. The disaster also alarmed people across the West, who are now asking themselves: Could a fire like that happen here?

“The number of conversations I have had since Paradise has skyrocketed,” says Ashland Forest Division Chief Chris Chambers.

Chambers is speaking among a throng of people at a screening of the documentary “Fire In Paradise” at a movie theater in downtown Ashland, just across the California-Oregon state border. Although the Camp Fire was more than 200 miles south of here, Chambers says it alarmed people living in Ashland — a small, woodsy town that, like Paradise, is tucked into forest. Which may be one reason why tickets to this theater screening sold out.

“People have really become concerned,” Chambers says. “I just hope that translates into lasting awareness in the sense that people take responsibility for the condition of their property.”

RELATED: In Central Washington, Forest Equipment Chews Through Fuel To Reduce Threat Of ‘The Next Paradise

One way to do that, he says, is by organizing a Firewise community. Firewise Communities USA is a national program that helps prepare neighborhoods for wildfire. It encourages neighbors to develop emergency plans, harden their homes with proper building materials and landscaping, and form relationships with emergency responders and each other. 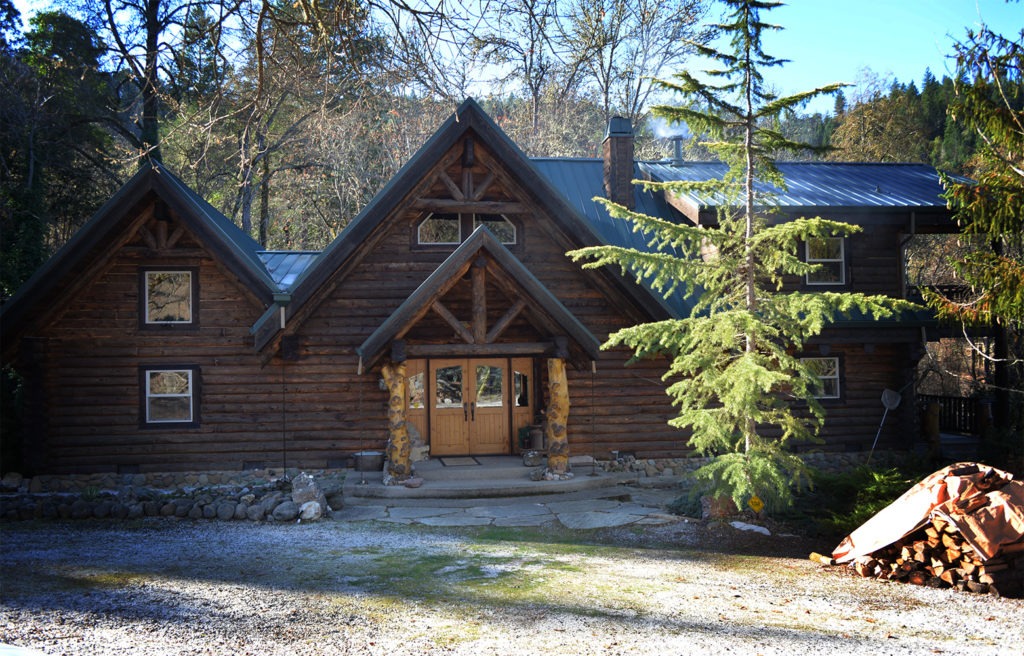 Towns living among forests have taken notice after recent deadly wildfires in Northern California, particularly after Paradise. But for the rural community of Foots Creek in Southern Oregon, wildfire has long been on their radar. CREDIT: April Ehrlich/JPR News

In Oregon, the Firewise program also provides free home assessments by state foresters, which is what brings Herb Johnson to a one-acre property in Foots Creek, an unincorporated town in Jackson County, just outside Gold Hill.

Johnson walks around a recently remodeled house along with homeowner Steven Williams. Johnson is checking for wildfire resistance: Are the vents screened to keep embers out? Are the eaves boxed in?

Johnson makes a few suggestions: enclose the back patio so embers can’t drift under it; remove the dead trees in the backyard, whose bark have been scraped clean by goats; rake the leaves that surround the house.

“Everything’s in good shape, except for a few things here and there,” Johnson tells Williams. “I would expect this house as it sits to survive a wildfire.”

This is a good example of a home that’s prepared for wildfire, Johnson says, but not all the homes in Foots Creek are in this condition.

“It’s country living,” Johnson says. “You’ve got new construction, then you’ve got some folks who have probably lived in the area for 40 to 50 years and haven’t done any work on the property in 20.”

Still, Johnson says Foots Creek is a star model of a successful Firewise community. Although this rural area is surrounded by trees, Johnson says about 80 percent of its nearly 300 homes are strengthened against wildfire, largely thanks to a wildfire plan community members started developing more than 15 years ago.

“Foots Creek is above and beyond,” Johnson says. “They’ve really taken matters into their own hands in preparing, which is great to see.”

And it all began with a single resident. Shayne Maxwell is the keeper of a massive three-inch binder full of maps, resources, and phone numbers reaching nearly every household in Foots Creek.

Maxwell says she set out to develop this fire plan immediately following the Biscuit Fire on 2002. 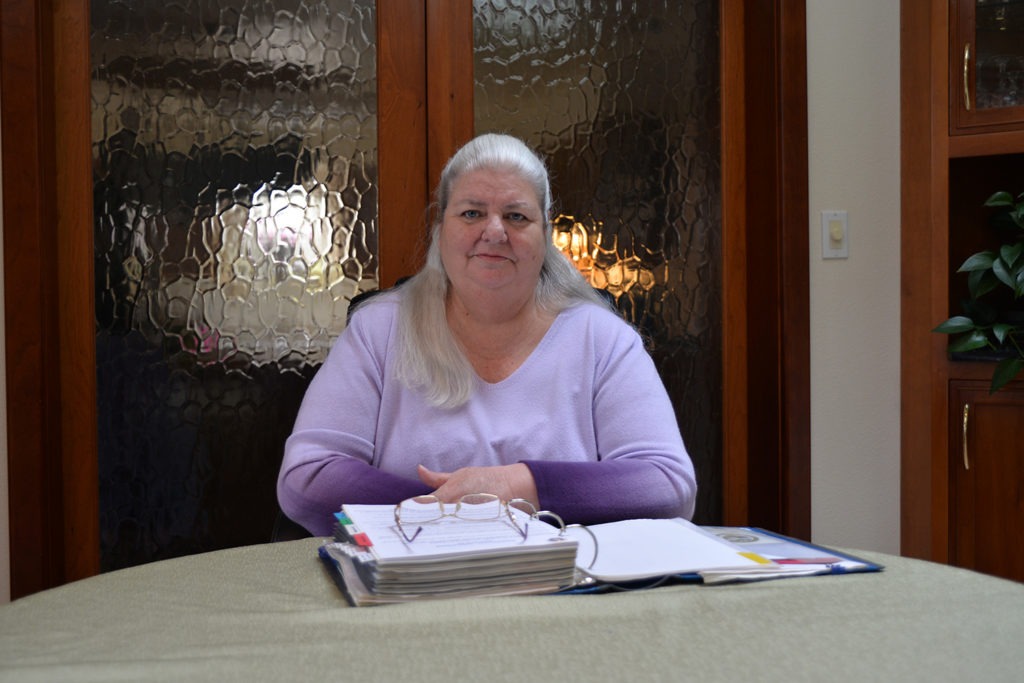 “That was such a devastating fire,” she recalls.

It burned over 500,000 acres — the largest wildfire in Oregon’s recorded history. About 15,000 people had to evacuate. Maxwell says a lot of them weren’t prepared, but they got help from landowners in Applegate, a nearby unincorporated community that had already developed its own fire plan. She says Applegate residents jumped into action — within an hour, they had sent trailers and bulldozers to help with the fire.

“They even brought a crane,” Maxwell says. “Seeing how quickly and how organized they were, it was incentive.”

Incentive to develop a fire plan for Foots Creek. She started small, at first; she organized a meeting at the Foots Creek general store with a handful of people. They met every two weeks, and at each meeting, they had to bring another neighbor.

Everyone fills out a survey that asks them to list phone numbers, pets, livestock, First Aid certifications, and heavy equipment like tractors or bulldozers  — anything that could be useful during a wildfire. Maxwell enters this information into an electronic database that she shares with the sheriff’s office, the Oregon Department of Forestry, and neighbors.

WATCH: Goats Much Grass To Reduce Fire Fuels In Wenatchee

So when a fire hits, the Oregon Department of Forestry calls Maxwell. She in turn calls 15 resident dispatchers. They each call about a dozen other people.

“It’s kind of a concert you have to put on, and you have to make sure everybody is coordinating together,” she says.

Like Paradise, Foots Creek is a one-way-in, one-way-out community. Maxwell fears that during a massive wildfire, people could become trapped in traffic as they try to escape. She and other Foots Creek residents are working with the sheriff’s office on evacuation routes, as well as an automated alert system that would kick in as soon as evacuations start. That way she and volunteer dispatchers can focus on their own safety during a disaster.

Among the Foots Creek Fire Plan volunteer dispatchers is Neil Thuresson, a landowner living just over the hill by Miller’s Gulch outside Gold Hill. A winding dirt road is the only way in or out of his property. After weaving through a dense thicket of madrones and oak trees, you’ll come upon a towering home made entirely of logs.

“It’s like Lincoln Logs,” Thuresson says. “It’s put together, piece by piece. Each log is marked and numbered. They assemble it with a crane, then you finish it.”

Thuresson built the rest of his home with wildfire in mind: a metal roof, a rooftop sprinkler system, and a sort of fire hydrant equipped with fire fighting hoses. He also built a series of Koi ponds and water features that encircle his home like a mote protecting a large, wooden castle.

He says all of this is necessary if you want to live in the woods. 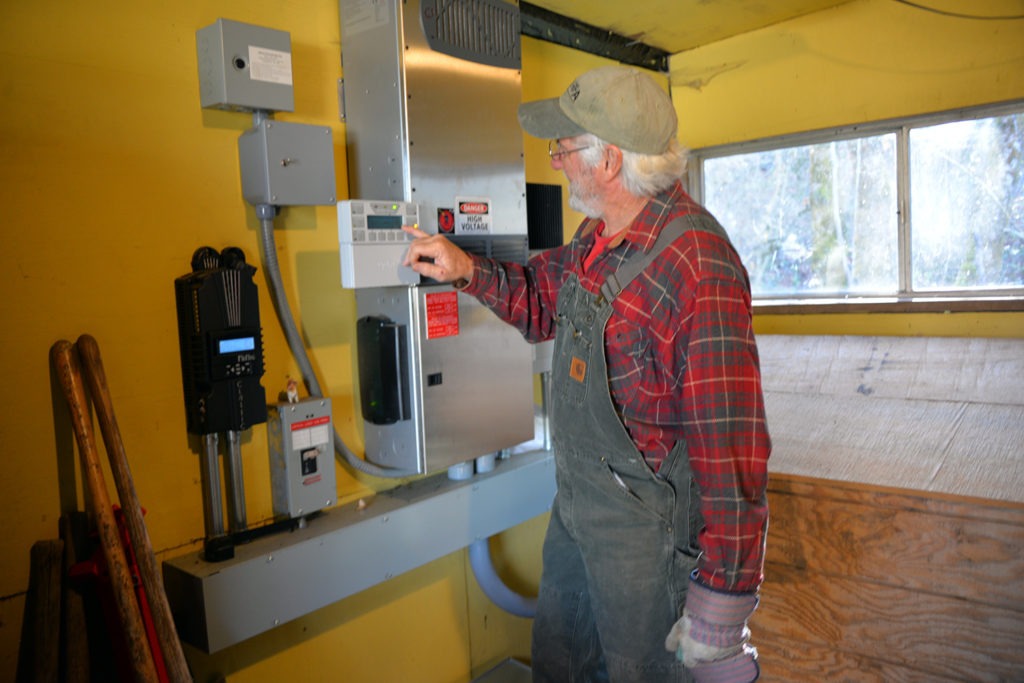 “Traditionally, especially in the Rogue Valley here, fire swept through here every decade,” Thuresson says. “And we haven’t seen fire in here for at least a hundred years. There’s a lot of fuel all the way around us.”

Thuresson is a retired Oregon State Parks ranger. He spent several years hosting tours, describing the different plants and trees of our forests — and the histories behind them. He assumes this role again as he walks around his property, explaining this complex system he’s developed for fire.

“Over here is the one thing people have to be concerned about,” he says, walking into a wood shed that’s buzzing loudly. “And that is your battery backup.”

He opens a crate in which there are a dozen large batteries neatly aligned like a carton of eggs.

Pacific Power says it will temporarily cut its customers’ electricity if high winds and dry weather pose a wildfire threat, much like Pacific Gas & Electric company is already doing in California. Thuresson needs power if he wants to pump water from his well for his sprinkler system, so he has installed solar panels that charge the batteries in this shed.

“Even if they cut my power off, or even if the poles coming up the road catch on fire — I will have power to run my well and keep my place wet,” Thuresson says.

But the biggest feat of Thuresson’s wildfire system is the dip pond less than a mile up the hill from his house. He had to rent a hydraulic excavator to dig a hole big enough to hold nearly 2 acre feet of water. It collects that water from Miller’s Gulch, a seasonal creek that runs through his 75-acre property. 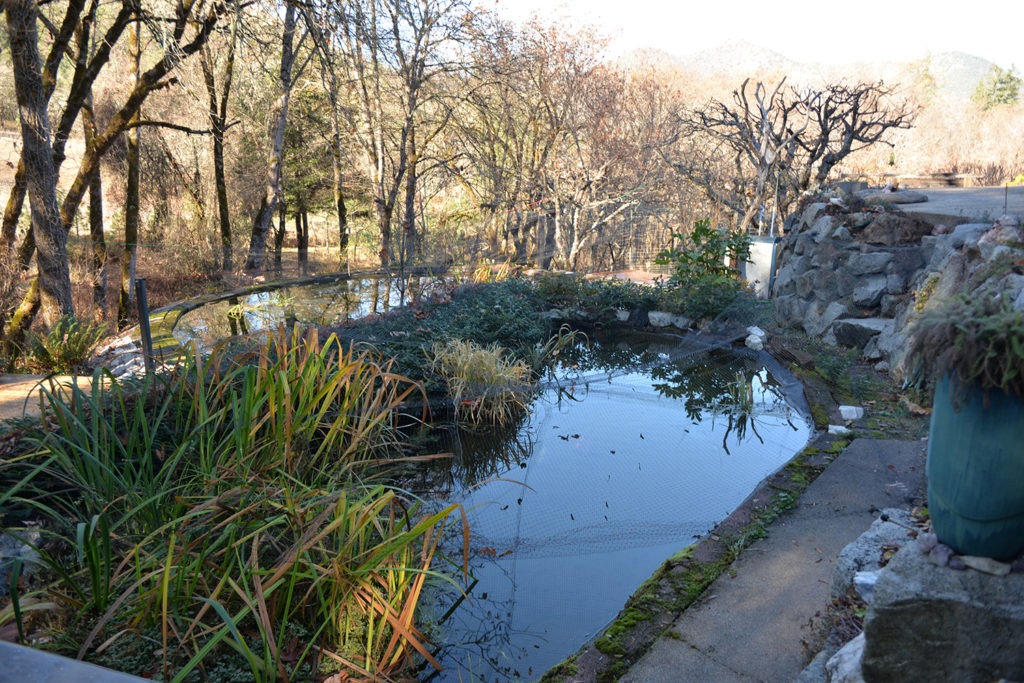 With the right permits, the state allows landowners to build these ponds so firefighting helicopters with dip buckets have a water source to pull from.

“This is the first strike for my fire suppression systems,” Thuresson says. “You can see the size of that pipe, I can really suck a lot of water out of it quick and have good pressure.”

Thuresson built everything himself: the dip pond, the fire hydrant and sprinkler system, the solar panels and battery backup. He says it cost about $10,000. He spent another couple thousand dollars on heavy equipment, including a brush hog for mowing undergrowth and a bulldozer for digging fire lines.

He also uses a chainsaw to cut the lower limbs off trees. Otherwise, fire could climb them.

Neil Thuresson installed solar panels on his property that charge large batteries, so he could pump his well in the event of a blackout.

Needless to say, all of this is a lot of work. But Neil says it’s worth it, if it means he gets to live here.

“I just love living in the woods,” Thuresson says. “I like seeing the animals and wildlife that live here. I like having the privacy and open space.”

Thuresson says this work is also his responsibility as a landowner living on 75 acres of forest. If a wildfire strikes his property, he can get a head start on the flames before firefighters get there. He sees it as a way of not only protecting his home, but the whole community, from a devastating wildfire.

In Central Washington, Forest Equipment Chews Through Fuel To Reduce Threat Of ‘The Next Paradise’

Connecting different projects – like these large-scale fuels management ones – with efforts by homeowners down below helps make the landscape more resilient. It’s part of a larger effort to help central Washington avoid the fate of towns like Paradise, California, which was devastated by the Camp Fire in 2018.
Continue Reading In Central Washington, Forest Equipment Chews Through Fuel To Reduce Threat Of ‘The Next Paradise’ 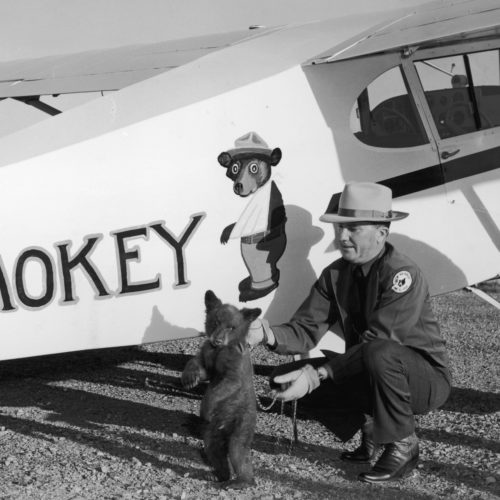 The longest-running public service campaign is tied to a reduction in wildfires, but in some ways Smokey’s message may have worked too well. Here’s how he’s changed. Continue Reading Careful With Those Birthday Candles, Smokey: Beloved Wildfire-Prevention Bear Turns 75 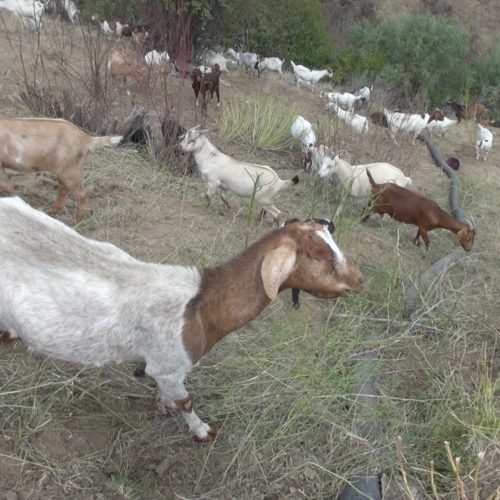 A fire district around Wenatchee has come up with a new way to make wildland fires less severe. Chelan County Fire District 1 is ditching the hand tools and machinery that firefighters traditionally use to thin overgrown brush. Instead, they’re turning to a more natural approach to thin out fuels around the Broadview neighborhood that burned in the 2015 Sleepy Hollow fire. Continue Reading Hey, That’s My Grass! Goats Chomp Fire Fuels Around Previously Burned Wenatchee Neighborhood