The number of people using goats to pack gear, game and food into the backcountry is rising rapidly, and national forests in at least 10 western states have proposed partial pack goat bans to prevent the spread of pathogens that could prove deadly to the west’s iconic populations of bighorn sheep.

On a recent day, Ann Summerton, a registered nurse and pack goat breeder, is unloading two young bucks at a trailhead in the Bitterroot Mountains of western Montana.

“It’s amazing the reactions we get when we’re out in the backcountry. A lot of people have never seen a goat that packs,” she says.

The goats are patchy with black, grey, and white fur, and stand a little less than 3 feet tall at the shoulder. She’s tying orange reflective tape on their collars to keep them safe from hunters.

Goats are affordable, easy to care for, and navigate the kind of rugged, tight, and steep terrain horses just can’t manage. To top it off, they graze as they go, so users don’t have to pack in any food for the animals.

A full-grown male can carry about 70 pounds. Goats can haul out game from a hunting trip, pack camping supplies miles into the mountains, or just help day hikers who can’t carry their own gear enjoy the crisp mountain air.

“It’s kind of an exploding sport, if you will,” Summerton says.

There are no centralized statistics, but Summerton says demand for the critters is getting higher across the west, and she feels it in her own operation. State and federal land management agencies are also giving the practice attention it’s never before received. 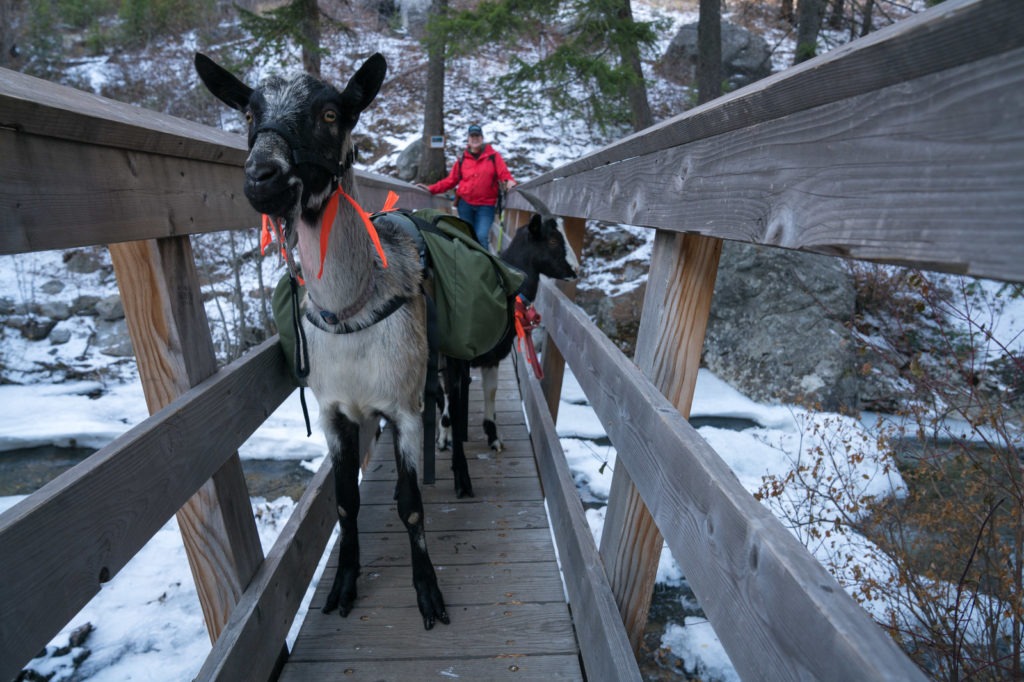 Pack goat breeder Ann Summerton on a trail in Montana’s Bitterroot Mountains with her goats, Bannack and Joker. Goats are affordable, easy to care for, and a full-grown male can carry about 70 pounds. CREDIT: Nick Mott/Montana Public Radio

“Goats have been banned in some areas, so we’re trying to fight against that a little bit,” she says.

Should Pack Goats Be Banned?

For the first time, national forests are formalizing pack goat regulations as they revise their forest plans. Those big documents only come along once every couple decades, and they govern wilderness, recreation, resources, and other uses. Some agencies are thinking about risks from llamas, too.

Agencies are devoting more attention to the animals because as pack goat numbers are increasing on public land, another species is struggling to maintain its footing. Before European settlement, more than a million bighorn sheep roamed across western North America. Entire cultures developed around the animal.

“By the 1950s, bighorn sheep numbers were fewer than 25,000,” says Kevin Hurley, vice president of conservation and operations at the Wild Sheep Foundation.

For decades, scientists have said domestic sheep grazing on public lands could transmit pathogens — in particular, Mycoplasma ovipneumoniae, or M. ovi for short — to bighorns that lead to pneumonia, an infection that’s devastated bighorn populations across the west. In Montana, more than 25 bighorn herds have experienced die-offs since the ’80s.

“It’s pretty tough to watch,” Hurley says. “But it’s been documented over and over again across so many jurisdictions. And so respiratory pneumonia is considered possibly the biggest impediment to bighorn restoration west-wide.”

But the science isn’t so clear. Some studies suggest that transmission of the pathogens from pack goats isn’t likely, or severe. The question is: should pack goats be banned, or can backcountry users keep ri