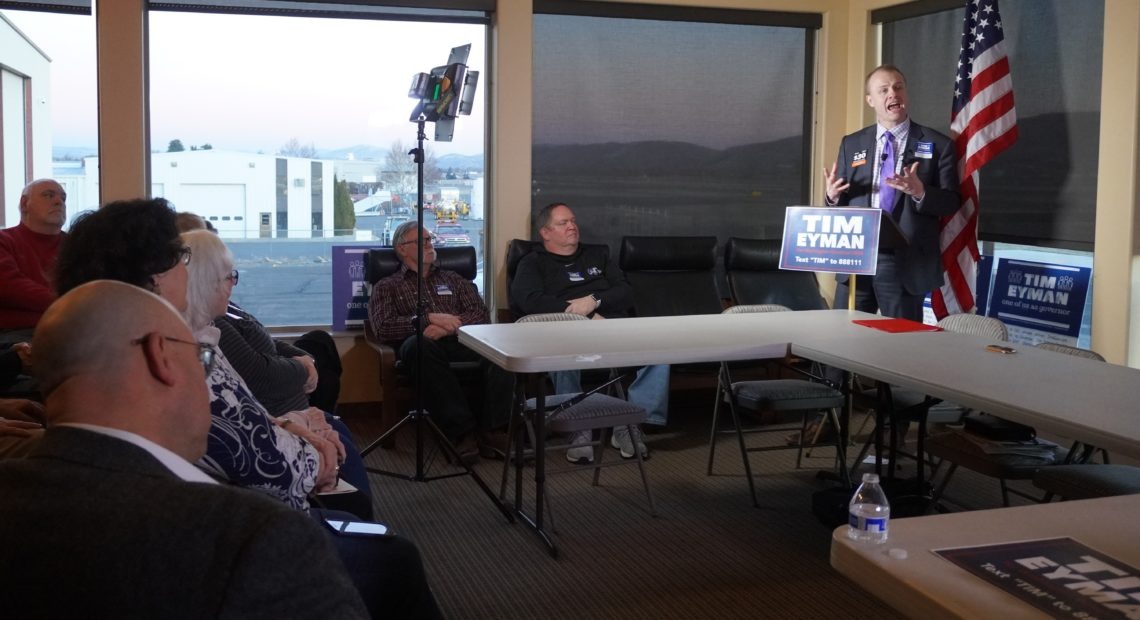 Anti-tax activist Tim Eyman announced his bid for Washington Governor in November as an independent. But Wednesday, in his home town of Yakima, he announced he’s now running as a Republican.

The announcement was met with jubilant cheers from supporters at a campaign event at Yakima’s McCormick Air Center. Eyman said he initially considered running as an independent because initiatives he sponsored in the past — from $30 car-tabs to a ban on affirmative action in 1998 — were nonpartisan.

“Every issue that I have proposed has nothing to do with party no matter how much the media or the Democrats ended up trying to make it that,” Eyman said in a speech to supporters. “I always ask voters to consider these issues on the merits and not to divide ourselves by party.”

Eyman gave credit to the “grassroots of the Republican party” for supporting his initiatives and said traditional Republican values of lower taxes and limited government align with his own value system, “a heck of a lot more than the Democratic Party,” Eyman said to the crowd.

“On the other side, you seem to have people that find books by Karl Marx more impressive than our Constitution,” Eyman said, referencing the author of the Communist Manifesto. “They want to re-engineer our society, rewrite our history, and divide us by skin color, by gender, and by income. They want to put a tax man in your wallet and a bureaucrat on your front lawn and make your God-given individual liberty something doled out at their discretion.”

But Eyman made it clear to supporters that he is not a traditional Republican candidate.

“People that have run against the Democrats all have one thing in common: they’re good, decent people that are incredibly polite, incredibly respectful and that hasn’t worked out so well,” Eyman said in an interview with NWPB. “Clearly, I’ve made it clear I’m going to be a very, very aggressive candidate when it comes to running against (current governor) Jay Inslee.” 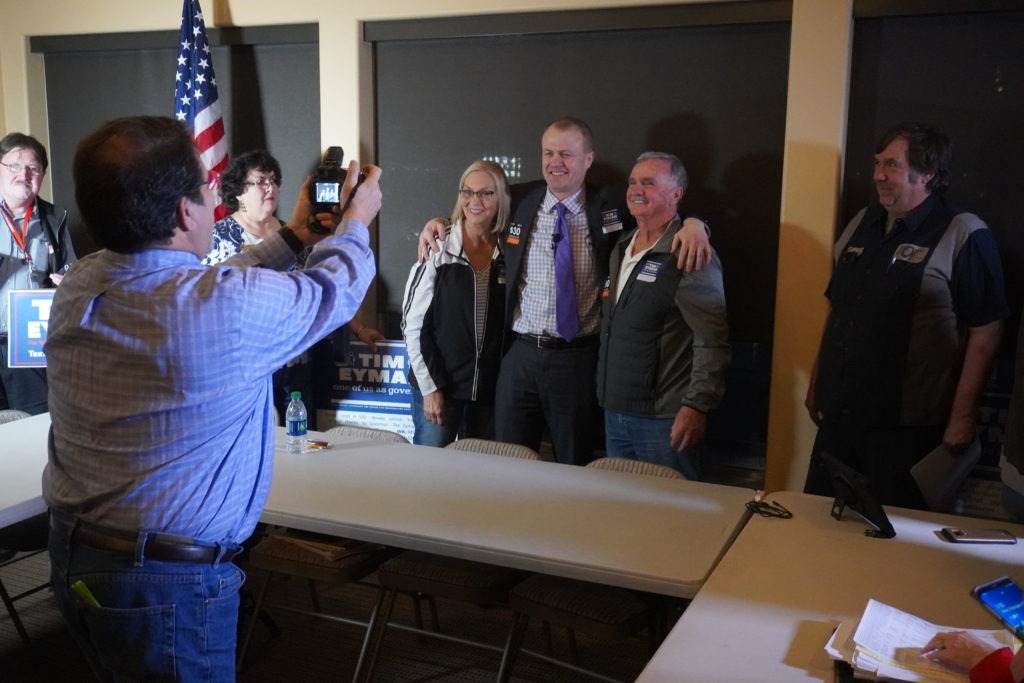 Tim Eyman poses for photos with supporters after a campaign event in Yakima where he announced his run for governor as a Republican, but maintaining anti-establishment persona. CREDIT: Enrique Pérez de la Rosa/NWPB

Eyman went toe-to-toe with Inslee in January at an Associated Press preview day of the 2020 legislative session. When the city of Seattle announced their lawsuit against I-976, arguing the $30 car tabs initiative approved by voters in November is unconstitutional, Eyman crashed the press conference and was confronted by pro-transit activists.

Eyman was outspoken during court proceedings in November, which the Attorney General’s Office, working in defense of the I-976, characterized in a press release as “wildly inappropriate, and it hurt our chances of successfully defending the people’s initiative.”

Eyman has accused Attorney General Bob Ferguson of sabotaging the defense of I-976. On Wednesday, hours before Eyman’s announcement in Yakima, a King County judge largely upheld the initiative, though it hasn’t taken effect. More legal challenges are expected.

Won’t Distance Himself From Trump

Unlike other Washington state Republicans, Eyman won’t distance himself from President Donald Trump, to whom supporters and detractors alike have compared him. Eyman said Trump was elected “because he heard from people what the political class didn’t. Because he was willing to do and say things that other candidates weren’t.”

Passage of I-976 speaks to voter dissatisfaction with Washington state’s tax system, Eyman said, calling it “grossly unfair” and adding as governor he would veto all new taxes, such as carbon, income or pay-per-mile taxes.

When asked what, if any, government spending he would cut, Eyman said it’s up to the legislature to prioritize, but he believes the natural growth of revenue from existing taxes is enough.

What’s clear to Eyman is that though voters continue to send Democrats to the state legislature, they’re unhappy with continuous increases in taxes.

“The voters have settled for fakers and fibbers for decades just because they have a ‘D’ next to their name,” Eyman said. “I decided since the Democrats and the media always try to make the initiatives about me and basically put me on the ballot, I felt it was time to just simply make it official.”

Washington’s primary election is Aug. 4, with the top two candidates advancing to the general election, regardless of party.