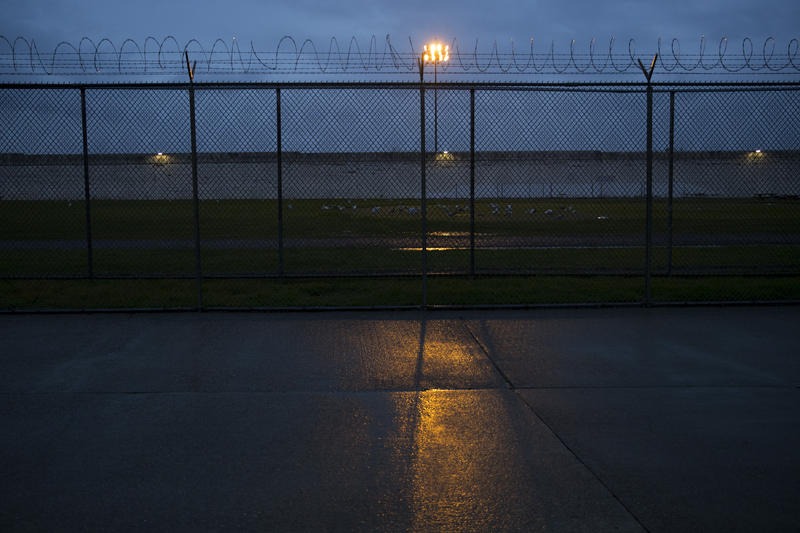 A large disturbance Wednesday evening at the Monroe Correctional Complex was likely triggered by rising tensions over COVID-19, according to the Washington Department of Corrections. So far, six inmates at the facility have tested positive for the virus.

The incident began just before 6 p.m. when more than 100 inmates walked out of the Minimum Security Unit (MSU) at a time when movement is not allowed. The MSU is one of five units at the prison complex.

DOC officials said that when officers ordered the inmates back inside, most complied and returned to their bunks, but a smaller group of about 50 did not and started setting off fire extinguishers in two housing units.

To quell the uprising, prison guards deployed pepper spray, “sting balls” and rubber pellets, according to a news release.

By 10 p.m., the agency said, the situation was under control and there were no reported injuries. The two housing units were evacuated and and the entire prison was put on lockdown.

Aerial footage from KOMO TV showed dozens of inmates in the prison yard following the incident. Several appeared to be on their knees with their hands restrained behind their backs.

“It is believed at this time that the incident was caused by recent positive test results of COVID-19,” DOC said in a statement.

On Sunday evening, DOC reported that an individual living in the MSU had tested positive for COVID-19. Then on Tuesday evening, the agency announced positive results from two more inmates. By Wednesday afternoon, the number had climbed to six.

RELATED: An Inmate In Monroe Prison Fears COVID-19 Could Sweep Through Like A Fire

According to DOC officials, all six inmates resided in the same housing unit in the MSU – Unit-B.

In an effort to reduce the risk of further spread, at least 17 other inmates from Unit-B, many with symptoms, were placed in a special isolation unit elsewhere on the prison grounds. The remaining more than 100 inmates were put on quarantine in Unit-B.

In an interview Wednesday night, Secretary of Corrections Steve Sinclair indicated that tensions had been rising for several days in the MSU because of COVID-19 concerns.

For instance, on Tuesday night, Sinclair said, prison staff “encountered resistance” in Unit-B when they asked a group of inmates to move out of their rooms and into nearby dormitories to free up space for approximately 16 inmates who were at risk for complications if they become sick with COVID-19.

As part of that effort, DOC officials said, the superintendent of the prison brought McDonald’s take-out food to the inmates in Unit-B with the goal of removing “the sting of the request.”

When that didn’t work, a second attempt at moving the inmates was made Wednesday. It too was reportedly unsuccessful.

At about 5 p.m. Wednesday, inmate representatives known as “tier reps” from Unit-B began a Skype call with the DOC’s chief medical officer and other department officials to discuss the prison’s response to the growing number COVID-19 cases.

It was during that call, DOC officials said, that the disturbance began in two nearby housing units known as C and D, where there have not been confirmed COVID-19 cases.

Officials said the incident began as a demonstration when more than 100 inmates exited their housing units during a time when movement is not allowed.

“They were headed outdoors and they weren’t doing anything other than gathering,” said Jeremy Barclay, the DOC’s engagement and outreach director.

The disturbance, Barclay said, erupted after the inmates were ordered back inside. It was not immediately clear how much damage the housing units sustained.

It was also not clear if the individuals involved in the disruption had specific demands, or if they threatened staff.

Susan Biller, a spokesperson for the Monroe Correctional Complex, acknowledged there’s a high level of concern among inmates in the MSU and their families about COVID-19.

“It’s a scary time, right? There’s a lot of fear. Nobody wants to get sick,” Biller said.

On Monday, after the first inmate tested positive, some family members staged a protest outside the prison.

Marcia Ameperosa’s son, Marcus McAtee, is serving his final 18 months in the MSU at Monroe. In an interview Wednesday evening, Ameperosa said she’s been getting messages from her son all week about COVID-19.

Among his concerns, she said, were that correctional officers weren’t always wearing masks and that social-distancing was hard to maintain. She said he also reported that some inmates had fashioned their own masks only to be told they couldn’t wear them.

Ameperosa read another message from her son that said: “Multiple people coughing on the tier … makes you wonder if one of those coughs is going to be the beginning.”

On Wednesday morning, he wrote to tell her about the staff bringing in fast food the night before.

“They’re actually trying to convince us by bribing us with McDonald’s,” he wrote.

On Wednesday evening, Ameperosa said she had not heard from her son again, but that she was in touch with other families who had also been getting messages from individuals in the MSU.

Secretary Sinclair called the disturbance a distraction from the work of responding to the public health crisis. Specifically, he noted that efforts are underway to issue masks to staff and incarcerated individuals alike to comply with guidance from the state Department of Health and the Centers for Disease Control and Prevention.

“We have lots of next steps we’re trying to get to and when people act out as these folks have done, it redirects valuable resources to have to deal with this kind of situation,” Sinclair said.

Late Wednesday evening, Columbia Legal Services, a law firm that advocates on behalf of people in prison, confirmed it plans to file a motion with the Washington Supreme Court on Thursday. The motion will ask the court to appoint a “special master” to oversee the DOC’s response to the coronavirus pandemic. The planned legal action was first reported by The Seattle Times.

Previously, Columbia Legal Services filed a petition with the Supreme Court seeking the early release of some inmates. Oral arguments in that case are scheduled for April 23. 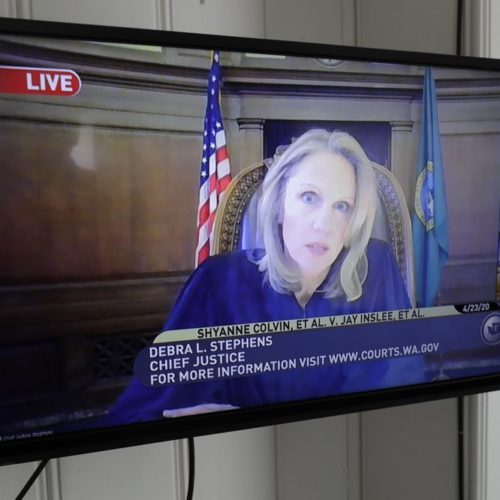 The justices, in a 5-4 decision, said that the prisoners who had sued failed to show that the Department of Corrections was not properly addressing the risk of COVID-19. Continue Reading Washington Supreme Court Denies Prisoners’ Request For Release Over Coronavirus Fears

A prisoner at the Monroe Correctional Complex has tested positive for COVID-19, making him the first incarcerated individual in a Washington prison known to have contracted the virus. Continue Reading First Washington Prison Inmate Tests Positive For COVID-19

The risk that COVID-19 could get into a prison is high, as is the potential for it to spread quickly because of tight spaces, shared quarters and dense populations. Adding to the danger is the fact Washington prisons – with nearly 17,000 inmates — are at 100 percent of capacity. Continue Reading A Washington Inmate Fears Coronavirus Could Sweep Through His Prison Like A Fire