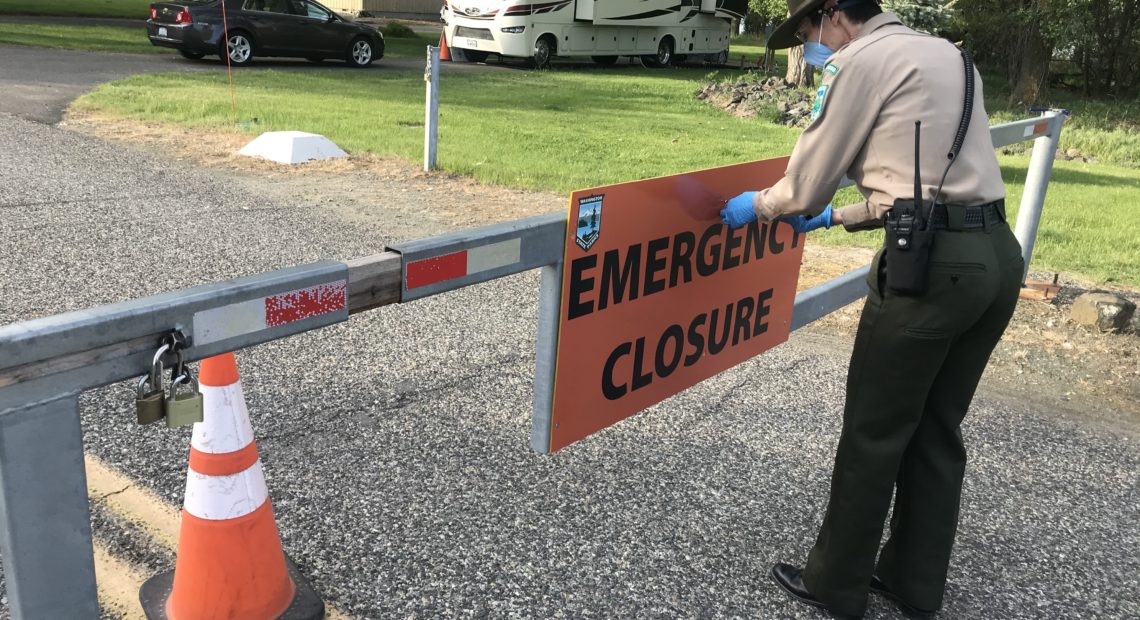 Sacajawea Historical State Park sits at the confluence of the Snake and Columbia rivers, on the outskirts of Pasco.

For the last six weeks, if you followed a winding road past the Port of Pasco and the start of a recreational trail, you’d come to a closed gate. A large orange “Emergency Closure” sign tacked to its front.

Today, the sign came down, and the gate opened.

“It deserves a little bit of pomp and circumstance, I think, since it’s been closed for so long,” State Parks area manager Audra Sims says.

Sims is decked out in blue plastic gloves and a blue mask, along with her state parks uniform. Just after 7:30, she grabs a screwdriver and starts to remove the sign. (The park opened to the public at 8 a.m.)

“Let’s see,” she says, as she looks at the sign. “I actually cheated. I took a few (of the screws) off last night.” 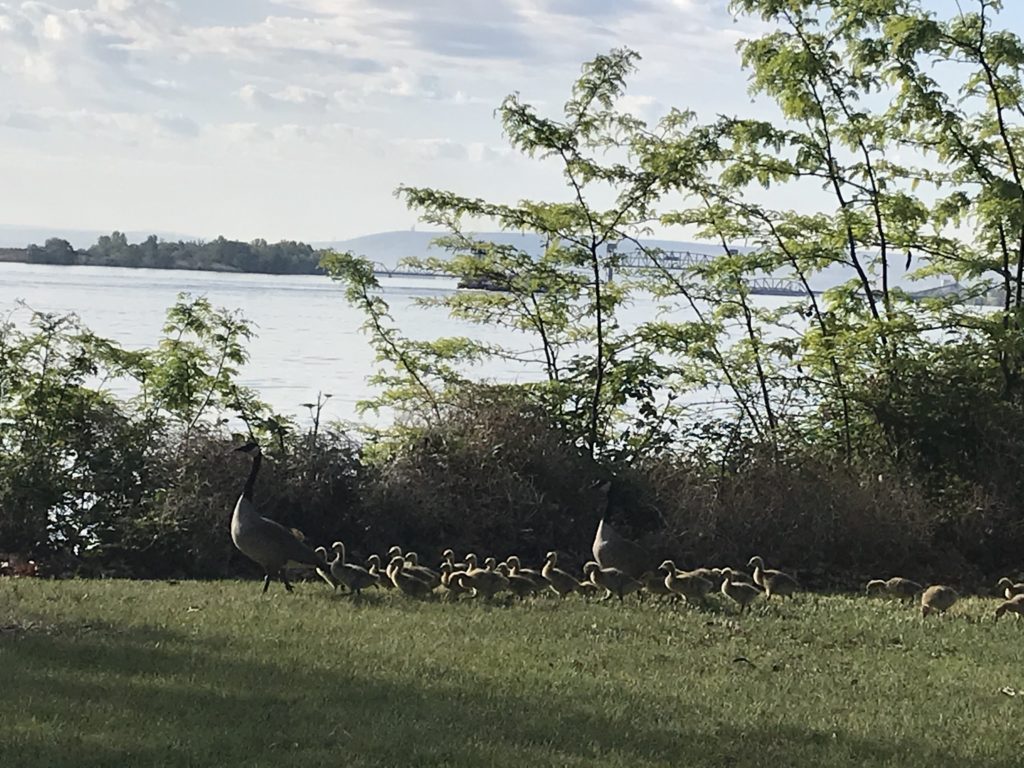 This is the only sign Sims will remove today. Other staff she works with will remove signs from the other parks she manages in the Blue Mountain region.

“I hope the public responds well to this.”

People are supposed to keep their distance, avoid crowded areas, wash their hands often and pack out what you pack in.

While the park was still closed, Sims said, “We’ve had people park outside and walk in. Then we have some people that are regular bicyclers in the Tri-Cities, and they’ll bike around the gate.”

Despite that, no one received a citation during the closure, according to state parks communications director Anna Gill.

“It isn’t technically illegal to access public lands. Our focus was on protecting resources. We didn’t want to put our staff at undue risk by coming into contact with the public,” Gill said.

Sims reaches in her pocket and grabs the keys. Several locks swing open, and she pushes the gate to the side.

“Hooray! We are open for business,” she claps her hands together. “Now, if folks will just stay local, practice social distancing, wash their hands, if we’re super busy, maybe try to find another place. But, otherwise, enjoy! Enjoy!”

Sims says she expects some boaters to launch from the park today, especially as fishing also opens. 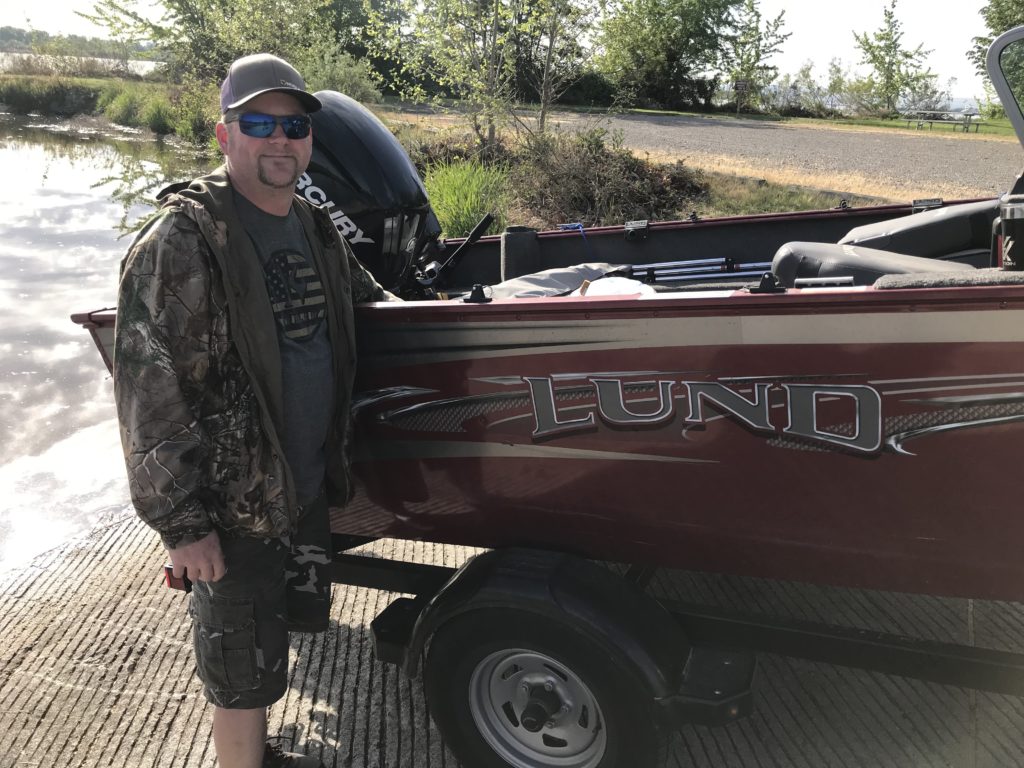 Kennewick resident Ed Hearn was the first person to launch his boat from Sacajawea State Park, 30 minutes after it opened Tuesday, May 5. Hearn tries to make it to the park at least once a weekend during the summer. CREDIT: Courtney Flatt/NWPB

For a while the park is empty, and nature keeps its rule of the grounds. Some Canada geese pick a fight with each other. A large group of goslings waddle around.

Five white-tailed deer appear just inside the park, close to the front entrance.

It’s something Kennewick fisher Ed Hearn noticed when he turned up 30 minutes later.

“It’s pretty cool,” Hearn says. “You will see them in the wild, but you won’t see them inside the park. It’s because people haven’t been here.”

Hearn and his wife usually come to Sacajawea every weekend in the summer.

He was frustrated that fishing was closed recently but excited to get back on the water this morning. He readied his boat, but didn’t see any other anglers out on the water yet.

“We’re pretty excited,” Hearn says. “We’ll see how we do. See if the fish take the worms.”