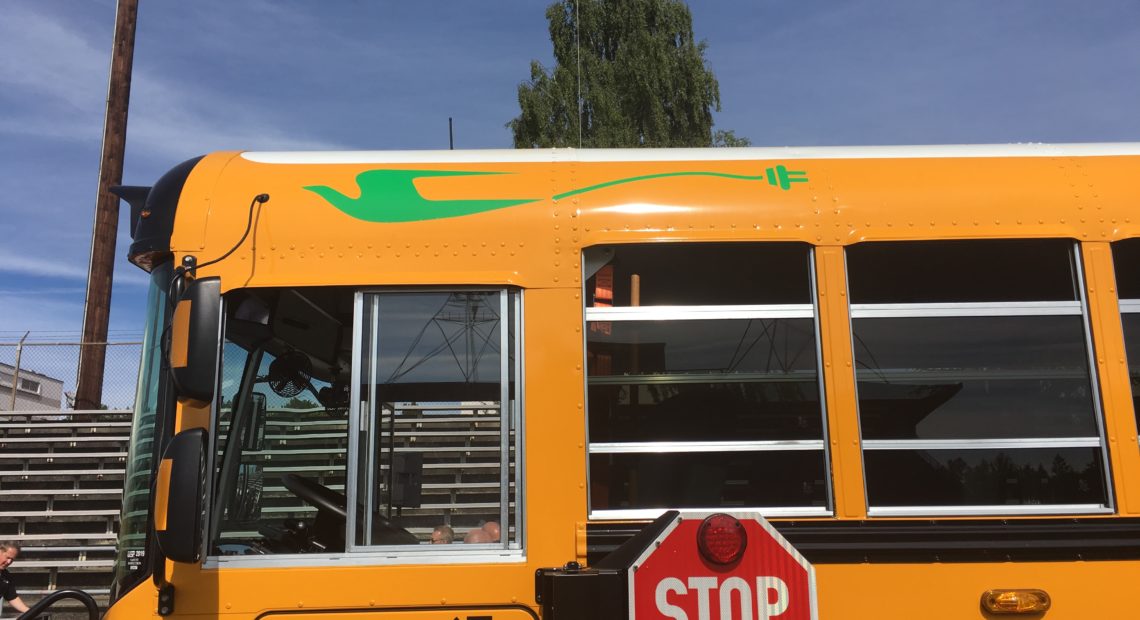 Forty new buses may transport students in districts throughout the state possibly starting in the fall — assuming in-person classes are back on.

One bus will land in the Republic School District in northeastern Washington’s Ferry County.

“At first, we were a little doubtful on if it would work here,” Jim Burnside, the district’s bus transportation supervisor, said.

They worried about Ferry County’s cold winters and what that could mean for an electric bus’ battery. But Burnside dug into the research a little more and decided it could work on four of the district’s five bus routes.

The district will have two charging stations at the bus barn. Burnside expects the bus will go around 125 miles between charging. He says the bus route lengths should “dial right in” with the battery’s charge, even in the cold winter months. A full charge can take six to 10 hours.

The goal of the buses across the state is to reduce emissions from diesel fuel. You might remember the familiar smell from riding in old school buses. Diesel exhaust contains nitrogen oxides and other forms of toxic air pollution, according to the state Department of Ecology.

Those emissions can be harmful for children. Districts are looking for the best ways to reduce emissions from the tailpipes of their fleet.

For example: the no-idle zone outside Republic’s school.

“When you bring five buses into a tight area, and they idle just for a few minutes, there’s a lot of fumes that come up that the kids have to breathe,” Burnside said. “In (the electric bus) there will be no fumes. And, if we get more of a fleet of electric buses, it will be more healthy for the kids.”

Burnside says if the experiment with this first bus goes well, he doesn’t see why they won’t get more electric buses – especially if there is help on the cost.

The Ecology grants help pay the difference between a new diesel-fueled bus and an electric bus. The funding comes from the national Volkswagen settlement, which stems from the scandal when the carmaker illegally installed software that allowed diesel cars to emit up to 40 times the legal limit for nitrous oxides.

Most of the grants were spread out on the west side of the state, where there’s more congestion from diesel pollution. But, the grants were able to help out some smaller school districts east of the Cascades, including Republic and the Pullman.

Only One Right Now

The only electric school bus in Washington right now is in the Franklin Pierce School District in Tacoma. These new buses in Republic and Pullman will help demonstrate how electric fleets could work in rural areas, Ecology spokesperson Andrew Wineke said. 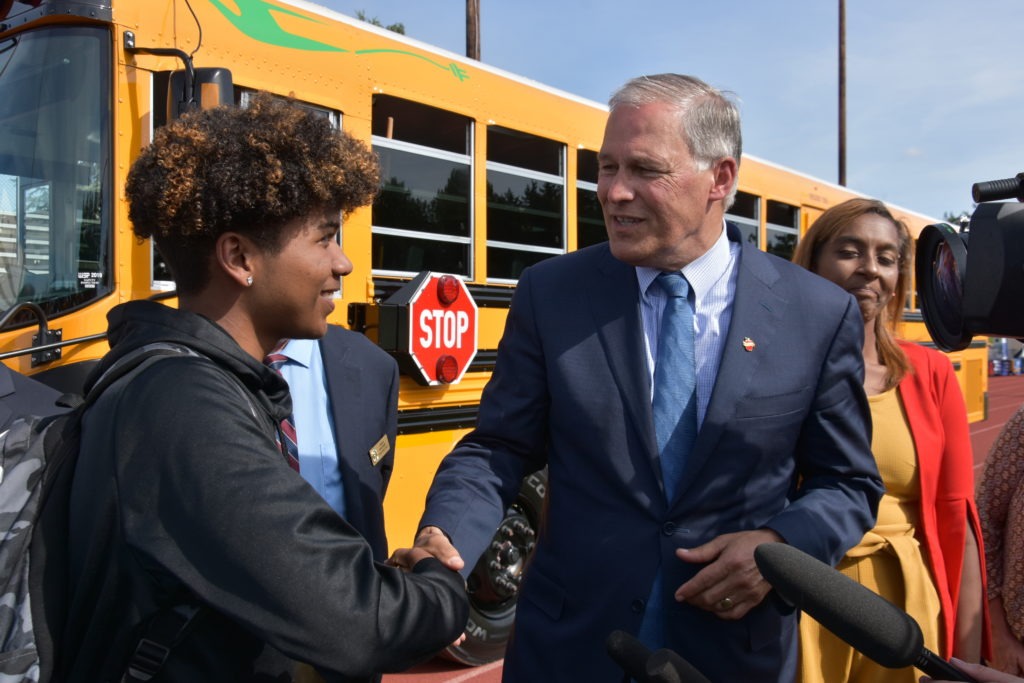 “One bus is one bus (in Franklin Pierce). Getting a bunch of buses out there and getting a lot of different real-world experiences with them, I think that really informs people’s plans and the kind of strategic process you need to convert a fleet,” Wineke said.

In what Ecology calls “one of the largest investments in zero-emission school buses in the country,” 22 school districts in Washington have received grants for up to three school buses and charging infrastructure.

In Oregon, the Department of Environmental Quality is also using Volkswagen settlement money to help electrify school bus fleets. Some of the state’s programs are still in the early stages, but DEQ is also helping with other reimbursement grants for electric school buses, like the Diesel Emissions Reduction Act.

In Pullman, one big concern is the cost of more electric buses. A standard gas or diesel bus is about $120,000, Joe Thornton, director of operations for the Pullman School District, said. Compare that to an electric bus, which can run up to $400,000.

“The reality is electric buses are too expensive for districts to purchase on their own,” Thornton said. “There needs to be some help, or the cost of electric buses needs to come down and be competitive with a gas or diesel bus.”

Pullman’s new electric bus will be one of the district’s 25 buses. The district is also working on plans for a new bus garage – an upgrade from the current facility built in 1954. (“It is due for a replacement,” Thornton said.)

He hopes funding for the transportation center would also include charging stations and, one day, solar panels.

In the meantime, Thornton said this bus will help reduce the district’s carbon footprint, which he said is critical.

It’s also an opportunity to educate the community about electric vehicles, Thornton said.

In Republic, Jim Burnside says his bus drivers will be ready to take to the road in the new bus.

“The bus drivers are going to have to draw straws to see who gets it because everybody wants to try it out,” Burnside said. “It’s supposed to be so much quieter than a regular diesel bus, smoother. Of course none of us have actually been in one yet. So, when we get it, it will be a little bit of a learning curve.” 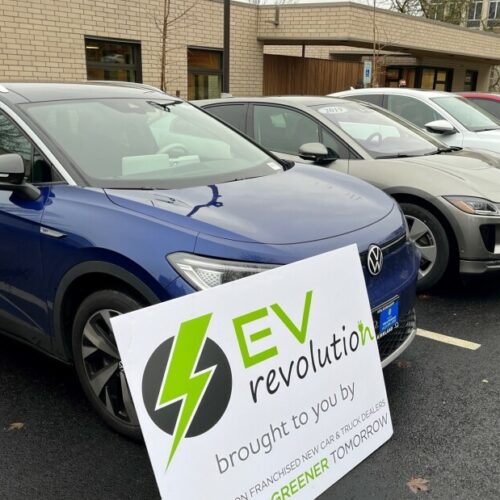 Democratic-led states on the West Coast are setting ambitious timelines to phase out sales of gasoline-powered cars and light trucks. The Washington Legislature just approved a goal that all new cars sold in the state beginning with model year 2030 be electric. Oregon and California have 2035 as their target. Some of these dates are aspirational, but one has teeth. Continue Reading Washington Wants Drivers To Plug Into Clean Cars By 2030 Before Other West Coast States 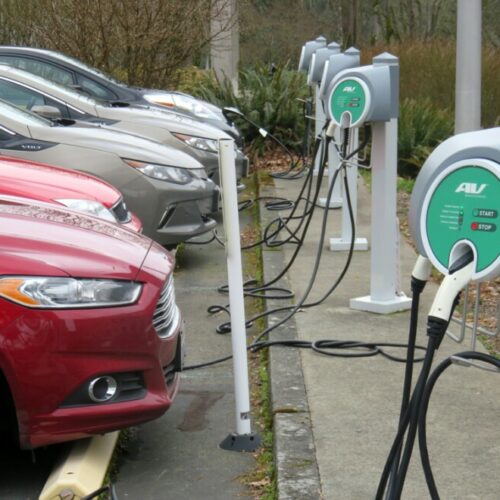