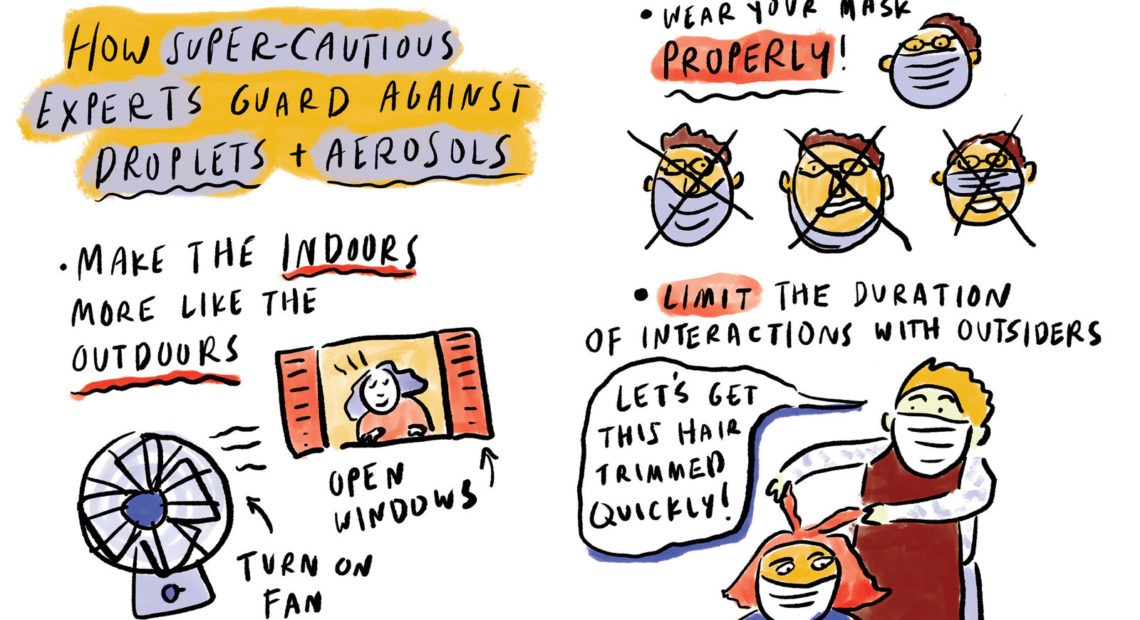 Coronavirus FAQ: How Do I Protect Myself If The Coronavirus Can Linger In The Air?

Q: I’m hearing a lot of talk about the coronavirus spreading through aerosols — is wearing a mask in a grocery store enough protection? What else should I do to stay safe?

Quick answer first: Going to the grocery store where you and everyone else is wearing a mask and keeping a distance from each other is still considered a low-risk activity. Go get your summer strawberries!

For background, aerosols are tiny microdroplets containing the virus that can be expelled when we talk or breathe and can stay aloft and travel on air currents. It’s still unclear how much of a role they play in spreading the virus, but recently more than 200 scientists wrote an open letter asking the World Health Organization to pay more attention to them. 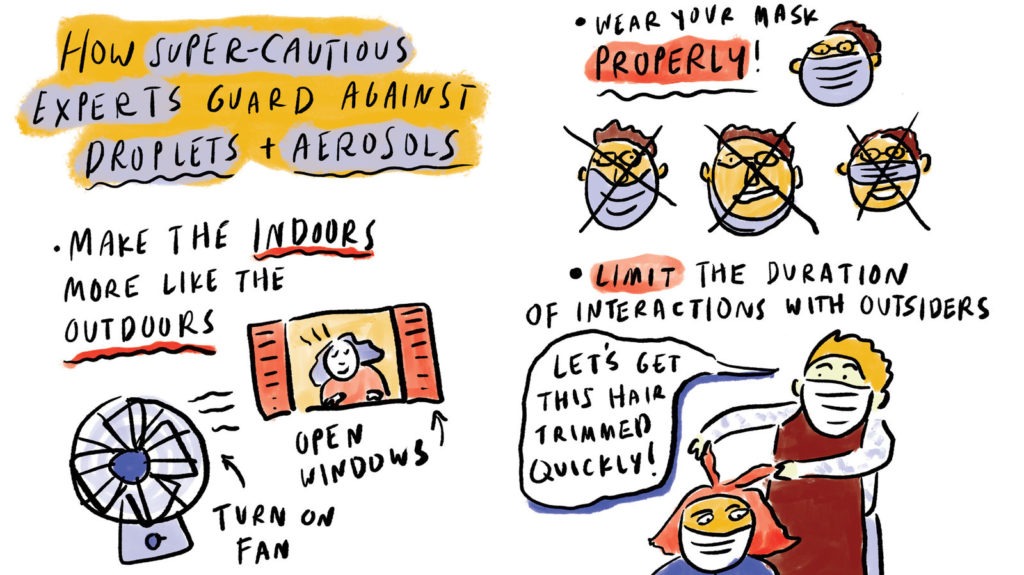 The agency still maintains that the greater risk of spread appears to be from droplets — larger particles, also expelled when we talk or breathe, which settle more quickly and are less likely to accumulate in the air. However, WHO released a new scientific brief on July 9 saying that airborne transmission might be contributing to spread in crowded, poorly-ventilated indoor spaces such as gyms, choir practice rooms and nightclubs. But how much transmission aerosolized particles are responsible for, versus droplets and contaminated surfaces, they can’t say for sure.

“What we are calling for is more systematic research to be done in these types of settings,” said Maria Van Kerkhove, technical lead for WHO’s health emergencies program, at a press conference on Friday. In other words, stay tuned.

Bottom line: It’s impossible to rule out that some amount of transmission may be caused by aerosols. If you want to err on the side of caution, here’s what some infectious disease researchers say can help minimize the risks:

Face away from people when you talk: When you’re talking face to face with someone, you’re in direct line of the plumes of breath that come out of their mouths when they speak. “If there’s any scenario where I’m face to face, with someone, I move my head off-center so I’m no longer inhaling that direct plume,” says Seema Lakdawala, a flu transmission researcher at the University of Pittsburgh. One tip that helps her is to not make direct eye contact with people. It can be awkward, she acknowledges, but “it’s not just about protecting myself, but also about protecting other people,” since it’s possible to shed the virus without knowing you’re infected.

Wear your mask properly: Wear a layered cloth mask in public spaces, especially if you’re indoors or in a setting where you can’t socially distance. Make sure it covers your nose and mouth. This will catch many of the droplets that come out when you breathe or speak and prevent them from getting into the air. Ideally, to take precautions against tiny, aerosolized microdroplets, “we should be masking everyone with better masks,” says Abraar Karan, a physician at Harvard Medical School. But the N95 masks that effectively filter most aerosol particles are in short supply and uncomfortable to wear. Karan suggests well-fitting KN95 masks which have similar protection (but make sure your mask isn’t counterfeit).

Make the indoors more like the outdoors: “You limit aerosol transmission by increasing ventilation and increasing air circulation — by opening a window, putting on a fan and just moving the air,” says Lakdawala, who keeps several fans running at all times in her lab and office space. Moving air disperses the particles in the air and makes it less likely that someone will breathe in a concentrated cloud of infectious virus. Donald Milton, an infectious disease aerobiologist at the University of Maryland and lead author on the open letter about aerosols, also recommends cleaning indoor air, through air filtration and ultraviolet sanitizing light. “You wouldn’t drink water downstream from another town without treating it. But we breathe air from other people without treating it,” he says.

Limit the amount of time you’re in close contact with people: The public health rule of thumb for what counts as an exposure is close contact with an infected person for 15 minutes or more, so uncrowded grocery stores where everyone is masked and moving represents a relatively low-risk situation, both Lakdawala and Milton agree. Hopefully, you’re not standing in one aisle for very long, but you’re going to shop efficiently, says Lakdawala, “So even if there are fine aerosols that are getting released by somebody who is infected, they’re getting diluted out as these people move in air currents.” Indoor bars, restaurants and other situations where people are staying in one place for a period of time, and speaking or singing loudly, make Milton more wary. “I don’t know how to drink a beer with a surgical mask on,” he says. “And I wouldn’t go sing at choir practice, OK?”

Keep a buffer of personal space: This isn’t just important for the spray of droplets, it may also help when it comes to tiny airborne particles. If you are planning to sit and talk to a friend, keeping a distance of at least 6 feet creates more opportunities for airflow between you and others. “We have a happy hour in our neighborhood where everybody brings our chairs, and we sit on someone’s lawn,” says Lakdawala. “Everyone is spatially distanced, and we bring our own drinks and talk.” Maintaining a distance from others means there’s more ventilation and space for air to pass between you, says Lakdawala.

Each precaution adds another layer of safety from aerosolized particles, says Milton. “Wearing a mask means you’re putting less virus droplets into the air, sucking less out [of the air]. Keeping distances means there’s less of it near you. And having good ventilation or air sanitation means what’s in the air is getting removed. All of those things add up to giving you good protection.”