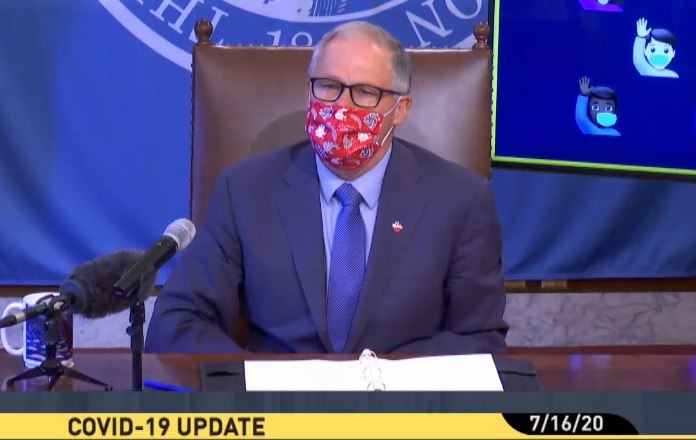 Washington Gov. Jay Inslee says there is a concerning rise in the rate of coronavirus infections in the state. On Thursday he announced one measure to address it as counties wait in limbo for further reopening. Beginning Monday, July 20, social gatherings in current Phase 3 counties will be limited to 10 or fewer people.

At the moment, 17 counties, mostly smaller population ones in eastern Washington and other less populated regions, are in Phase 3 of the state’s four-phase reopening plan.

Earlier this week, Inslee and the state Department of Health said they would pause further county reopening applications until at least July 28.

The new measures will not apply to funerals, weddings or religious services, or to indoor businesses, like gyms or retail stores.

But it will apply to social gatherings held either indoors or outdoors, including live, in-person or drive-in concerts or other entertainment.

Asked in a press briefing Thursday how he might respond to groups of largely young people disregarding his measures, and whether he thought there should be more actual enforcement, Inslee responded with caution.

He noted that many young adults work in essential services and the kinds of bar, restaurant, grocery and similar industries where they are in closer contact with the general public and therefore more likely to be exposed to coronavirus infection.

“I’ll defend them to a certain degree,” he said.

But he went on to say that in other respects, younger adults need to take responsibility for their actions and realize that their behavior in social settings doesn’t just affect themselves, but those around them, including their older relatives.

“The fact is we are simply seeing behavior that is way too risky,” he said.

Inslee ended the briefing by using a line he has for much of the pandemic, telling people to “wash your hands” and “mask up.” He added a relatively new line Thursday: “And care about your grandma.”