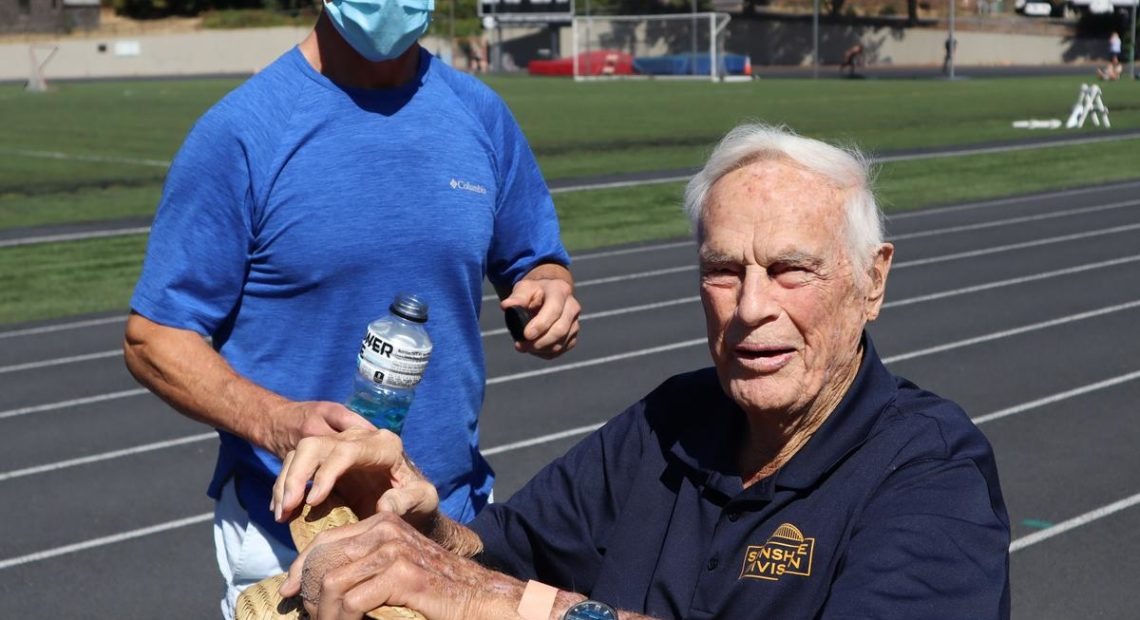 Two WWII Vets – One In The Northwest, One In Britain – Lap Expectations For Their 100th Birthdays

A World War II army veteran in Great Britain achieved world renown earlier this year with a charity walk to raise money for British health care workers on the front lines of the pandemic. The achievement went viral — in a good way — and inspired another pandemic feat by a 100-year-old U.S. Army veteran across the ocean in Portland, Oregon.

The British chap, Captain Tom Moore, was the face of a fundraiser that involved him making 100 laps around his garden ahead of his 100th birthday while the country was on lockdown.

Moore sported a blazer pinned with medals while an honor guard from the British Army’s Yorkshire Regiment stood at attention. The public response to Moore’s walk raised an astonishing amount of money, $40 million. The initial goal had been to raise £1,000 (approx. $1,200) for the National Health Service.

The story of Captain Tom reached Bud Lewis of Portland through a chain of friends and family. The two men are virtually the same age. Lewis also served in World War II in the tropics. The U.S. Army veteran was convinced by his circle to copy his British counterpart.

“I am pleased beyond words to be able to do this and at the same time stay in shape,” Lewis said.

The challenge Lewis accepted was to raise $100,000 by doing 100 laps before his 100th birthday. He started May 7, giving him a timespan just shy of 100 days. Donors who sponsored laps benefited an emergency food and clothing relief charity — Sunshine Division in Portland, which Lewis once led.

“I said, by God, I need the exercise for one thing. And Sunshine Division is dear to my heart,” Lewis explained in an interview. “I have exercised all of my life. It was just a great way to do it. I combined several things.”

Lewis walked his laps not in an English garden, but on the regulation 400 meter track in Portland’s Duniway Park. He nearly always had company at the track from family or old friends, or new friends he made at the track. “Bud’s Battalion,” they called themselves.

At one point in June, a Portland TV anchor making chit-chat on air with her co-anchor mixed up Bud Lewis’ name with Bud Clark, the colorful former Portland mayor and pub owner. That scored the ex-mayor an invitation to walk some laps with Lewis. The two Buds joked that the result was a modern Lewis and Clark Expedition.

“It’s really been a lovely journey,” the friendly, outgoing Lewis remarked. “It has spread beyond what I thought it would be.”

Lewis still circles the track a couple times on a couple days each week, alternately striding ahead leaning over his walker or propelling himself forward with his feet while seated backwards-facing on the walker. And he still attracts a crowd of admirers, including Mark Holman, a friend from the Multnomah Athletic Club.

“To me, he’s quite inspirational during the Covid period and what happened with George Floyd dying and stuff,” Holman said. “He was kind of a beacon of hope. That would come out to inspire me to join him.”

Bud Lewis has now walked much farther than his British inspiration did. Lewis logged 265 laps through the end of August — the equivalent of more than 70 miles. Meanwhile, England’s Capt. Tom Moore was knighted by Queen Elisabeth II. It’d be nice to keep up the parallels, said Lewis’ daughter Diane.

“We’ve got to talk to somebody about that, although I’m not sure in the United States we make knights,” Diane Lewis said. “But we could do an exception for my dad.”

Until then, Bud’s Battalion takes satisfaction from how the charity walk put food on the tables of struggling families in the Portland area. In an interview Monday, the current head of Sunshine Division described an extraordinary increase in demand for food boxes due to unemployment and the COVID-19 pandemic.

“I have no record of an individual person raising anywhere near close to $125,000 for us. He’s in rare air,” said Executive Director Kyle Camberg about the 100 Laps To 100 Years feat.

“We’re gearing up for a long haul,” said Camberg switching to the sobering outlook. “I don’t think that we are anywhere near the finish line. Based on what we’ve seen, the need for emergency food has only grown throughout the summer.” 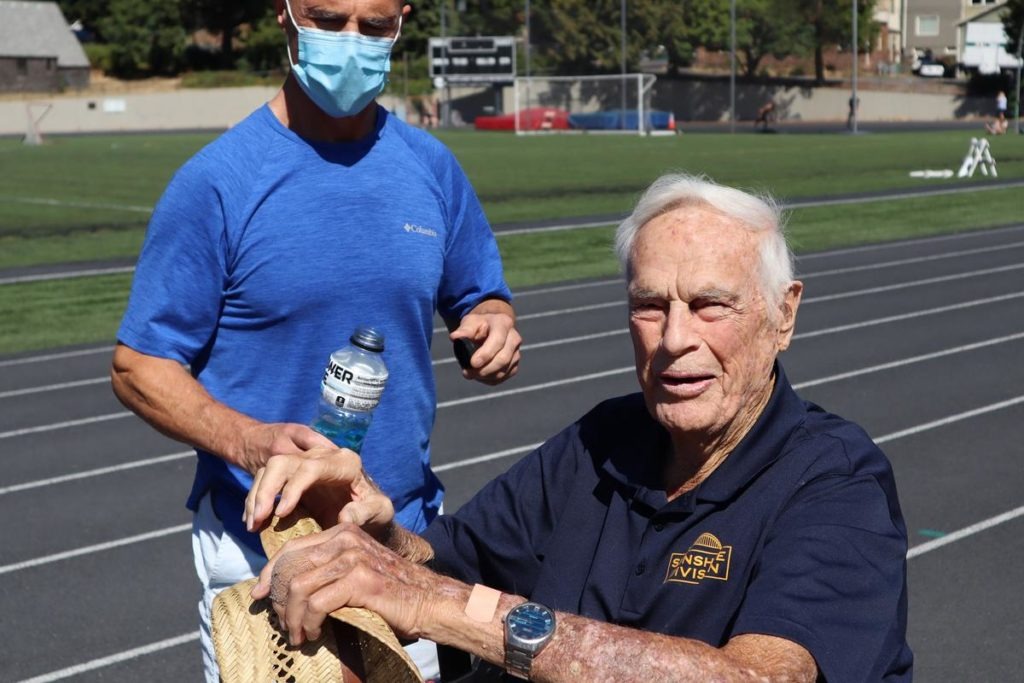 Bud Lewis accomplished his 100 Laps To 100 Years feat ahead of schedule – and kept on walking.
CREDIT: Tom Banse/N3

A long time ago, Lewis had Camberg’s responsibilities. Lewis’ last assignment in a 31-year stint with the Portland Police Bureau was leading the department’s unusual humanitarian arm, the Sunshine Division, from 1963-73. The charity was eventually spun off into an independent nonprofit, which it continues to be today.

Lewis took up his police career after being demobilized when World War II ended. He enlisted in the Oregon National Guard in 1936 when he was 16 years old by lying about his age.

“I lied for a good purpose,” Lewis explained with a smile.

When the world war started, his unit was folded into the U.S. Army’s 41st Infantry Division. Lewis served as an ammunition ordnance sergeant, distributing ammunition to the front lines. The division deployed to Australia and then went on the offensive against the Japanese in the New Guinea campaign. The brutal tropical warfare earned the division the nickname, “The Jungleers.”

A 2017 biography of Lewis by family friend Sheri Closterman Anderson was titled “A Strong Grip” in reference to the heavy crates of ammunition Lewis hauled without the benefit of handles.

He eventually contracted malaria and hepatitis during the New Guinea campaign, for which he was first treated in a field hospital, then on a Navy hospital ship, before being sent home to recover stateside in the autumn of 1944.

Lewis said he remembers the celebrations on the day the Japanese signed the articles of surrender to formally end World War II. But the day after also has particular significance to him. On September 3, 1945, he was discharged from active duty at Camp Lewis, Washington.

On Wednesday, September 2, the 75th anniversary of the end of World War II will be commemorated in ceremonies around the country, nearly all of which have been scaled back due to coronavirus concerns. 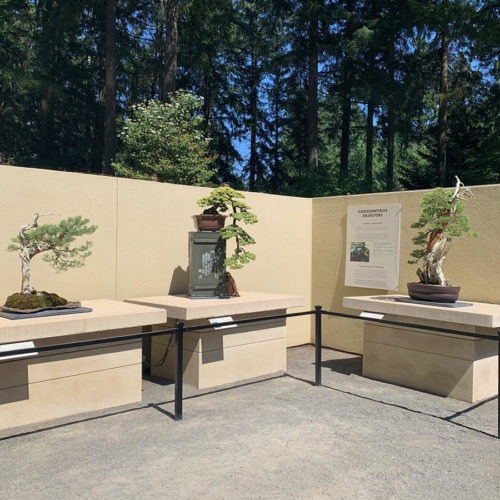