The federal government has proposed awarding grazing allotments to an Oregon ranching family whose members were convicted of arson in a court battle that triggered the takeover of a federal wildlife refuge by right-wing extremists.

The Dec. 31 action by the Bureau of Land Management in favor of Hammond Ranches angered environmental groups.

“Giving the permit to the Hammonds shows a flagrant disregard for the rule of law … and is clearly a political move rather than a responsible allocation of public lands,” said Erik Molvar, executive director of Western Watersheds Project.

Steven Hammond co-owned the ranch with his father, Dwight. They were both convicted of arson for setting fire to range land and sent to prison for mandatory five-year sentences.

That led to the armed occupation of Malheur National Wildlife Refuge in Oregon for 41 days in 2016. One occupier was shot dead by Oregon State Police. They say he reached for a pistol at a roadblock.

President Donald Trump pardoned the Hammonds in 2018, allowing them to be freed from federal prison.

In a proposed decision made on Dec. 31, the BLM said Hammond Ranches should be apportioned all available forage in the Bridge Creek area grazing allotments in the high desert of eastern Oregon.

The federal agency cited the Hammonds’ “extensive historic use of these allotments, past proper use of rangeland resources, a high level of general need, and advantages conferred by topography.”

But in 2014, when Barack Obama was president, the BLM denied Hammond Ranches, Inc. a grazing permit renewal, saying it “does not have a satisfactory record of performance” and cited numerous incidents of arson.

At the Hammonds’ trial, witnesses testified that a 2001 arson fire occurred shortly after Steven Hammond and his hunting party illegally slaughtered deer on BLM property. One said Steven Hammond handed out matches with instructions to “light up the whole country.” The jury also convicted Steven Hammond for a 2006 blaze.

“With one foot out the door, the Trump Administration is trying … to allow these bad-actor permittees to run roughshod over public lands,” said Sarah McMillan, Conservation Director for WildEarth Guardians. 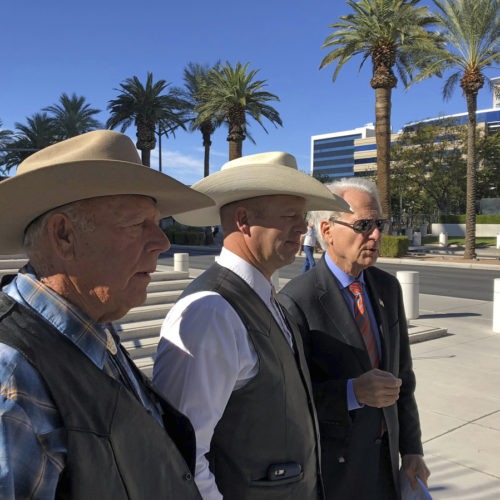