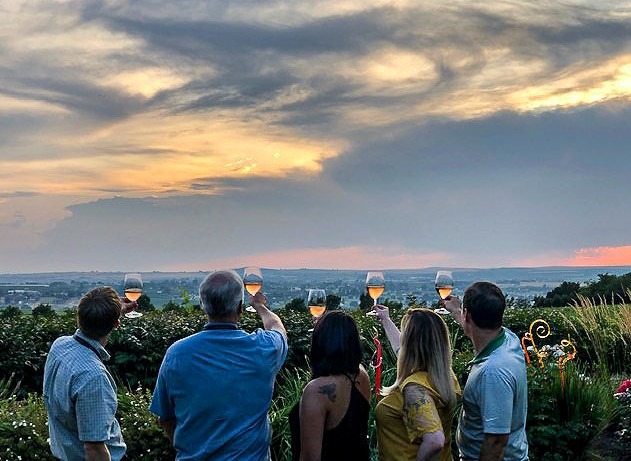 Hordes of case-nabbing wine fans are already descending upon wine country, but the pandemic has upended everything about this sun-seeking ritual of spring.

When wineries release their new vintages to the public it’s often called “Spring release.” Those bottlings have been cooped up all winter aging. So have winter-weary patrons.

Those who are fully vaccinated against COVID-19 are stepping out to wineries and meeting in small groups both outdoors and in.

“My husband and I have been extremely careful for more than a year,” says Candace Andrews, of Prosser, Washington. She says it was great to go with a friend to Wautoma Springs winery in the Yakima Valley. “It was certainly lovely to get out and to know that the wineries were taking the safety protocols seriously.”

As restrictions loosen, and more people have received the vaccine, people are visiting their favorite restaurants, wineries and vacation lodging.

“[March 20-21] was our biggest weekend in over a year,” says Darel Allwine, head winemaker for Col Solare winery near Benton City, Washington. He says the high-end winery grossed more than $10,000 that weekend.

On the other hand, not every winery is embracing the return of visitors. Cayuse Vineyards and Leonetti Cellars, which usually draw thousands to eastern Washington for their parties on two spring weekends in April and May, aren’t doing their traditional private spring wine pickup parties. Leonetti Cellars is instead 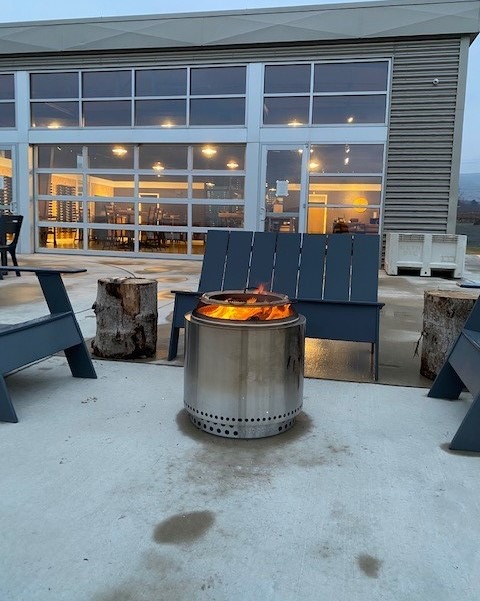 Those weekends alone helped pack restaurants, hotels and traffic at many of eastern Washington’s other wineries pre-pandemic.

Many winemakers say they are seeing the front edge of pent-up demand that might be uncorked soon.

“People are starved, you see,” says Marie-Eve Gilla, director of winemaking and viticulture at Valdemar Estates, south of Walla Walla. “They can’t go to France and Spain this year, so they are going to go get wine on the West Coast.”

By appointment only tastings are common in California. And this year many Northwest wineries have decided to offer tastings this way.

“I really think COVID has shown the winery owners there is another way,” Gilla says. “We are going to stay appointments only, because it’s a lot better experience.”

In Oregon too, appointment-only bookings have taken hold.

If wineries do allow for reservations, a lot of them fill up in advance, says Gina Bianco, Rogue Valley Vintners executive director, based in Medford.

“There are several of our wineries that get booked up well in advance, so that’s an important factor if you’re planning to come out,” Bianco says. “And there are other wineries that are just popular and so they are always full, so it’s reservations recommended always.”

This is a major change for Washington wineries, unlike those in California’s Napa Valley. Washington ones typically welcomed carloads of revelers as they came to their establishments. Many wineries don’t think they’ll be going back to open doors even when the pandemic eases.

Some Northwest wineries are looking to further expand their outdoor tasting experiences so they can accommodate more people.

Charlie Hoppes at Fidelitas Winery on Red Mountain near Benton City, has invested in several sleek wood-burning fire pits on his patio to keep tasters toasty while they sip.

“We are seeing an uptick definitely,” Hoppes says. “Probably a couple of weekends ago we had one of our best weekends ever on Red Mountain.

Just getting out of the house has been the common theme of most of his customers, Hoppes says.

“For everyone’s own mental health it’s been good.”

Some wineries are entertaining outdoors to increase their capacity. Like Valdemar Estates south of Walla Walla.

Valdemar is even planning a scaled-down outdoor winemaker’s dinner in April.

At Ste. Michelle Wine Estates in Woodinville, Washington, this year’s concert lineup — usually well in hand — is still not firmed up. Many headlining bands are seeing how many venues open up so they can construct a profitable tour, says winery spokesman Ryan Pennington. Some sort of concert lineup is likely, but it will likely cost more and be much lower capacity than normal, he says.

“We’re all in a big game of chicken and seeing when people have the confidence to pull the trigger,” Pennington says. “If things keep on the right track, those restrictions might [lessen] before the concert season.”

Many Oregon wineries expanded their outdoor seating when it was clear COVID-19 wasn’t going away. It’s only been in the last month that partial indoor seating has been allowed, says Rogue Valley’s Bianco. She says wineries have expanded decks, added fire pits and heaters, even offered blankets.

“When you have a beautiful weather day, the occupancy reflects that,” she says. “On windy or colder days you would have fewer people.”

COVID-19 shuttered most tasting rooms and many restaurants in early spring 2020.

“Regarding the pandemic as a whole, we don’t yet know the full impact,” Heather Bradshaw of the Washington Wine Commission wrote in an email. “However, a study conducted by Agri-Business Consultants, LLC [last] September estimated that the total economic impact on the Washington economy from the reduced wine and grape sales to be more than $850 million from the COVID-19 pandemic related effects.” 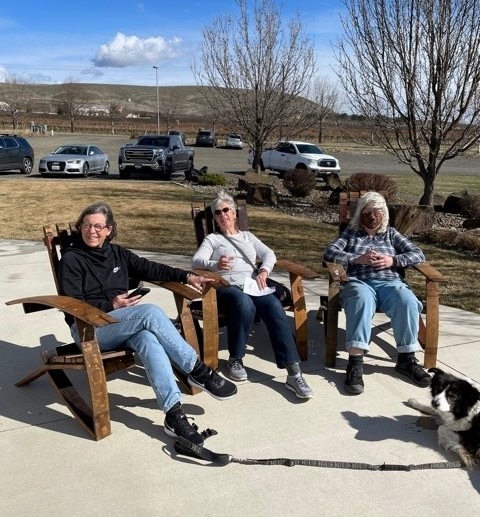 Wine lovers are coming back to Northwest wineries this spring, as wineries have gotten creative to survive the pandemic, including more outdoor seating. Courtesy of Fidelitas winery

The bright spot for wineries was that panicked grocery sales of wines soared. But it makes for some tricky math for wineries to gauge how they’re doing this year, says Pennington, with Ste. Michelle Wine Estates. Assessing the company’s fortunes during and after the pandemic will depend on how they compare to those frantic times in March 2020.

Some Oregon wineries have had record direct-to-consumer sales, Bianco says.

“They are definitely selling in a way different way than they used to,” she says. “Now it’s more of a social media active way.”

Some wineries have closed permanently because of the pandemic, but many are still going forward, she says.

Beyond the pandemic’s effects, the past two years of weather conditions have made for light wine grape cropping in Washington and Oregon.

The Washington State Wine Commission reports that about 11 percent less fruit was collected in 2020 than the year before.

That means there is overall less wine to be had this year — a big change from the glut conditions several years ago when grape prices dropped because of so much available fruit.

“It is a lighter yield year for sure,” says Rogue Valley’s Bianco. “A lighter yield but more concentrated fruits. As a result, we expect 2020 to be a really excellent vintage.”

Washington State Wine Commission president Steve Warner says everyone he speaks to is quite optimistic.

“We’re coming off a very high quality harvest,” he says. “And now that some of the restrictions are being lifted, they are able to open their tasting rooms and welcome customers back.”

He says the pandemic has also taught winemakers some new tricks: new ways to do online sales, curbside pickup and new marketing techniques.

Jessica Mozeico, is owner and winemaker at Et Fille Wines, in Newberg, Oregon. She says this spring is a hopeful time at Northwest wineries — perhaps more than other years.

“The vines have been asleep for five months. And now they are waking up,” she says. “No matter how long or dark the winter, the buds break [open] every year.” 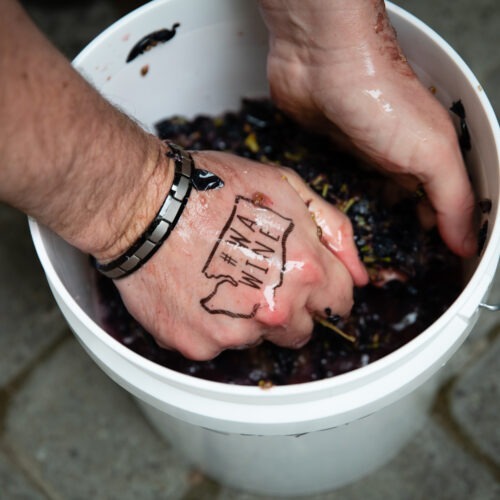 What Does It Mean To Produce Sustainable Wine?

The Washington Wine Commission has a new program for growers called Sustainable WA. It’s a three-pronged approach enabling Washington Wines to be a leader in the industry. It focuses on sustainability in growing grapes, being stewards to the land, and having a healthy workforce. Continue Reading What Does It Mean To Produce Sustainable Wine? 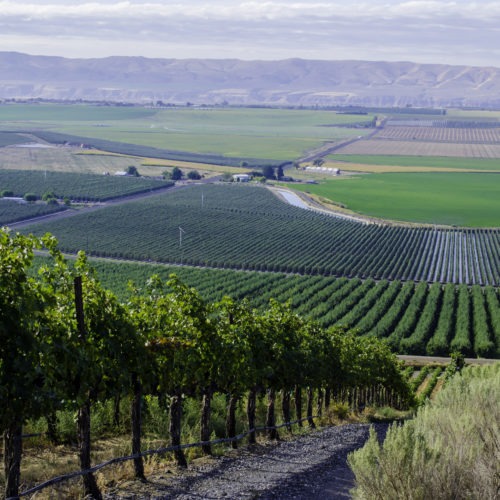 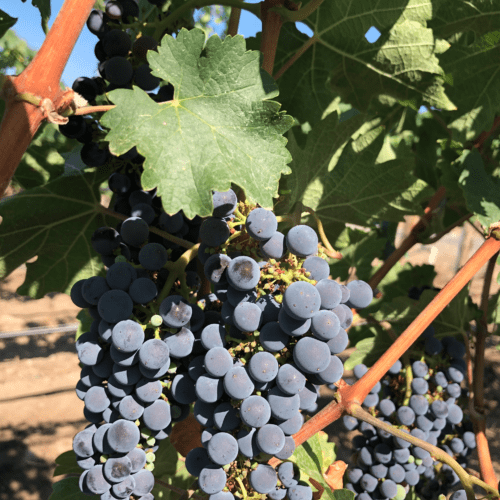