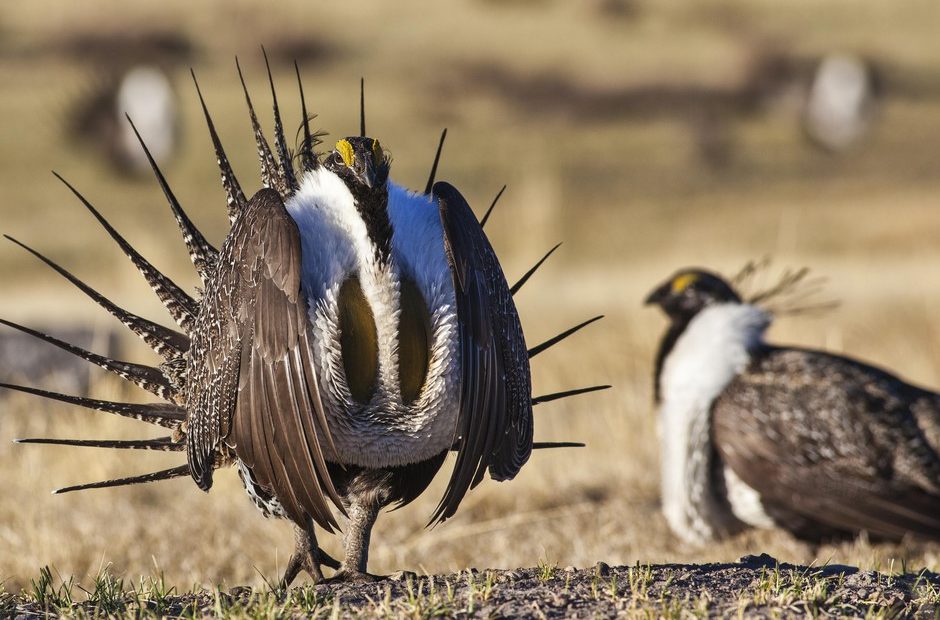 This spring, biologists discovered something they weren’t expecting to see. Male sage grouse proudly strutting during their quirky mating dances. The strange thing was, these birds were puffing up the bulbous air sacs on their chests, their songs calling out to nearby hens, right in the middle of a giant burn scar.

“You’ll see these males displaying out in a completely burned, barren landscape. And they seem to be able to handle it,” says Michael Schroeder, who’s been working on sage grouse issues for the Washington Department of Fish and Wildlife for nearly 30 years.

Last summer, fire had burned through much of the area’s prime habitat. Biologists had been deeply concerned about Washington’s imperiled birds. The health of the greater sage grouse is an early cue for the health of the sagebrush ecosystem as a whole – and the more than 300 other species that depend on it to survive.

“I was not optimistic after the fires. I was pretty low then,” Schroeder says.

It seems many of the birds survived the fire. Still, their problems continue to mount.

That’s why the WDFW Commission decided to change the birds’ status in Washington. Now, sage grouse will be considered endangered in the state.

“The biggest thing that happens because of this is that it highlights this conservation concern of the species even more,” saysTaylor Cotten, WDFW conservation assessment section manager.

Among other concerns, Douglas County commissioners worried about land use restrictions.

WDFW commissioners said a state listing was more “carrot than stick,” including getting more help from federal farm bill programs to set aside land for conservation and working land programs through the Sage Grouse Initiative.

Spokane-based commissioner Kim Thorbun said sage grouse needed to be considered endangered in Washington, but a lot of their prime habitat in Douglas County is on private lands, where people also suffered during the 2020 Pearl Hill fire.

“It’s my hope since so much of the recovery depends on collaborations and partnerships – particularly with federal agencies – that hopefully can help both recoveries for humans as well as the birds and that the uplisting is going to help accomplish that,” Thorburn says.

The birds aren’t considered threatened federally. In 2015, after years of work across 11 Western states, the Interior Department decided the birds did not need to be added to the endangered species list.

At the time, it was mostly thought of as a success story – a new way to manage species collaboratively without adding restrictions across a wide-ranging habitat, with wide-ranging threats.

Sage grouse in the Columbia Basin are cut off from others in Oregon and southern Idaho, making them unique in their recovery. In 1998, Washington listed its sage grouse as threatened. They now occupy around 8 percent of their historic range in the state.

The Washington birds have distinct population characteristics. They’ve evolved to lay more eggs at a time than their neighbors to the south. They’re also much bigger, Schroeder says.

Biologists estimate there are about 770 sage grouse in Washington. Of those birds, fewer than 120 are breeding, which means only a few sage grouse are actually reproducing. Roughly 107 of those are in Douglas County, where the 2020 fires burned large swaths of land. 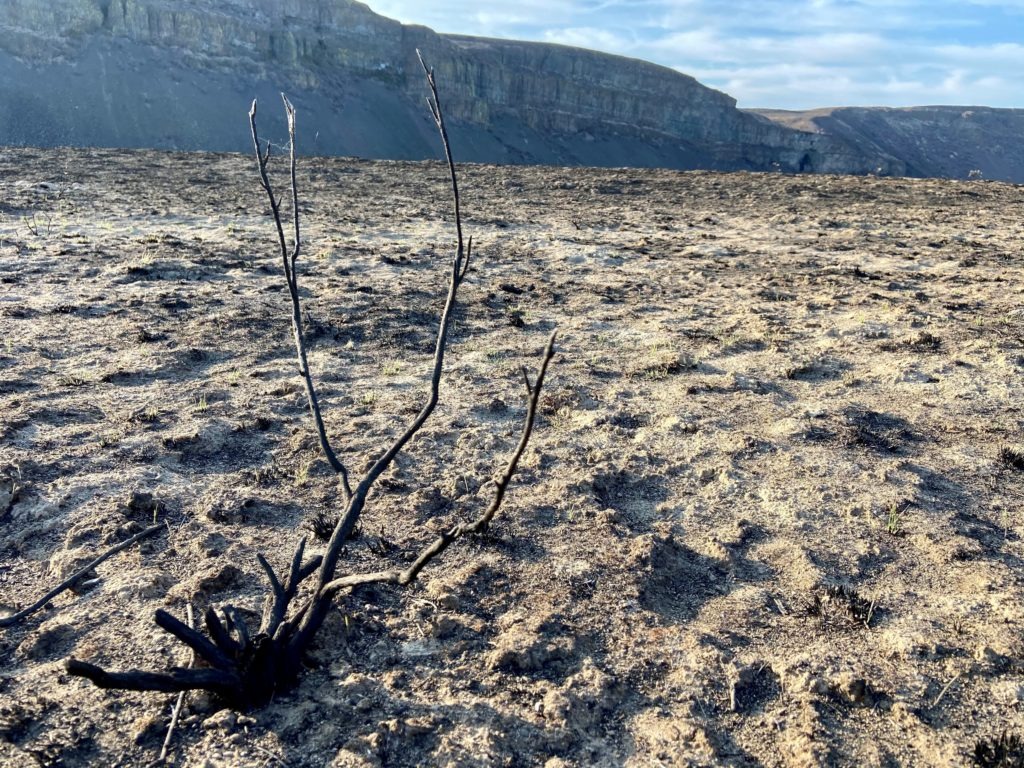 Many of the sagebrush in this Moses Coulee area of central Washington were burned to a crisp during the September 2020 Pearl Hill Fire. It can take decades for sagebrush to fully recover after an extremely intense wildfire. CREDIT: Courtney Flatt/NWPB

There are so few birds in other parts of Washington that their loss is almost inevitable.

“According to a new study by the U.S. Geological Survey, the Washington State population has suffered a 91 percent decrease over the past 55 years,” said Steve Holmer of American Bird Conservancy in a statement. “It further concludes that the population has little hope of survival unless the current course is dramatically altered and stronger conservation measures put in place.”

In eastern Washington’s Lincoln County, biologists had moved in birds from surrounding states. A harsh winter a few years ago decimated the population.

The ground froze over, creating a crust that Shroeder says made it hard for the birds to stay warm and to eat. Staff reports say extinction of this population is “all but certain.”

A similar fate could fall to another group of sage grouse at the Yakima Training Center military area “within a decade or so,” after repeated fires have burned habitat. When just one fire gets out of control, it can wipe out whole swaths of habitat.

“It ends up being a cycle that’s very difficult to get out of,” Schroeder says. “And the population is low enough now where, genetically, the birds are starting to get into a situation where genetic drift and the possibility of inbreeding become bigger issues.”

In Washington, fires have turned out to be the biggest threats to sage grouse in recent years. Habitat is also fragmented by roads, transmission lines and agriculture. In north-central Washington, ravens will often eat eggs out of nests.

Schroeder worries that even though birds have turned up after the 2020 fire season, they will likely have trouble finding productive nesting areas.

“They’re scraping the bottom of the barrel when it comes to places to nest. It’s really tough out there. They have to move a lot farther to areas where they can find something that serves as reasonable nesting habitat,” Schroeder says.

Despite their clunky appearance, sage grouse can fly pretty far. Birds regularly travel up to 15 miles to find good nesting or overwintering habitat. The trouble is, the 2020 Labor Day fire was massive.

“I can drive probably to the better part of 25 miles in one direction and never leave the fire perimeter,” Schroeder said. “That’s a long way.”

He says sage grouse also tend to return to mating and nesting areas they’ve used in the past.

In Washington, good nesting habitat looks like a lot of grasses and wildflowers with an overstory, usually big sagebrush. In Oregon and Idaho, nesting habitat is more often heavily made up of sagebrush and fewer grasses.

“The fire really took the wind out of our sails, as far as what we were expecting to see,” he says. “Instead of that, now we’re kind of treading water.”

The health of sage grouse can point to the health of the sagebrush ecosystem as a whole – and the more than 300 other species that depend on such habitat. In fact, several species in Washington are also dealing with the effects of wildfires year after year, including endangered pygmy rabbits, black-tailed and white-tailed jack rabbits and sharp-tailed grouse, which were recently deemed endangered in the state.

He says other states and Canadian provinces with more robust sage grouse populations 30 years ago have since let their numbers plummet. Now they’ve got fewer birds than Washington.

“Back then, they used to joke about the Washington birds – how every single bird in the state had a name because there were so few of them. We clearly have a serious conservation situation here, but other states have passed us,” Schroeder said.

“We have to keep the birds on the landscape so that we can take advantage of (conservation) opportunities when they come along,” he says. “So far, we’ve been able to do that. It sometimes is depressing to see the declines. But keeping them on the landscape right now is our goal.”