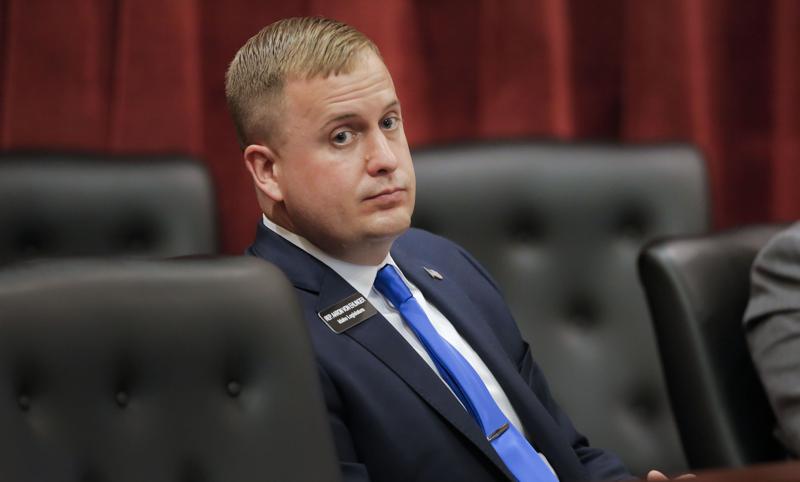 NOTE: This story contains details about an accusation of sexual assault that may be triggering or otherwise not appropriate for all people. For more information on reporting about sexual violence, see these resources from the National Sexual Violence Resource Center. The confidential national sexual assault hotline is available to help victims with reporting and emotional support. Phone: 800-656-4673. More resources here.

Idaho Rep. Aaron von Ehlinger resigned from the Legislature Thursday. It came several hours after the House Ethics Committee recommended suspension and possible expulsion of the Republican lawmaker from Lewiston amid an investigation into a rape accusation from a 19-year-old staffer.

The full Idaho House was set to consider suspension and possible expulsion as early as tomorrow.

#Breaking – A resignation letter from Rep. von Ehlinger was just read on the #Idaho House floor. Full letter read by the clerk below #IDPol #IDLeg pic.twitter.com/pNTlnURLMA

A legislative ethics committee on Thursday found that an Idaho lawmaker who was accused of rape by a 19-year-old intern should be formally censured and suspended from office.

The full House could vote on the matter as soon as Friday, and if a majority agrees, Rep. Aaron von Ehlinger will be required to vacate his office and stay off the Statehouse grounds immediately. In that case, a new lawmaker would be appointed to fill in for the Republican from Lewiston.

The investigation into Rep. Aaron von Ehlinger began in March after a young staffer reported he raped her in his apartment after the two had dinner at a Boise restaurant. Von Ehlinger has denied all wrongdoing and maintains he had consensual sexual contact with the young woman. The Boise Police Department is investigating the case, and von Ehlinger has not been charged.

The five-member ethics panel also agreed that they would throw unanimous support behind a motion to expel von Ehlinger if any House lawmaker decides to make one.

Public ethics hearings and penalties against lawmakers are rare but not unheard of in Idaho.

Republican Rep. John Green of Post Falls was expelled on a 65-0 vote on Jan. 16, 2020, after he was convicted of conspiring to defraud the U.S. government. Prosecutors in that case said he helped a wealthy Texas couple hide assets to avoid paying income taxes when Green worked as an attorney there.

In Green’s case, no public hearing was held because the Idaho Constitution doesn’t allow someone to hold any civil office if convicted of a felony, but two-thirds of the full House must vote to expel someone.

Republican Sen. John McGee resigned rather than face a public ethics hearing after he was accused of sexually assaulting a staffer in his office. He was ultimately charged and convicted of disturbing the peace in connection with that incident.

Republican Sen. Jack Noble resigned from office in 2005 following weeks of allegations that he failed to declare a conflict of interest and lied to a special ethics panel.

Committee members will reconvene Thursday morning to debate their next steps.

The complaint was lodged by a 19-year-old legislative staffer who said the legislator forced her into a sexual act during a date in March. Boise Police have investigated, but no legal charges have yet been filed.

Committee members say the hearing is not to determine whether von Ehlinger is guilty of a crime, but to determine if he violated House rules in having a sexual relationship with the woman and whether he should be disciplined.

During Wednesday’s hearing, the committee heard from the woman who lodged the complaint, referred to in the hearing as Jane Doe, as she recounted a few of the details from that evening. She said von Ehlinger took her to dinner, then to his apartment. He claimed he had forgotten something. In the apartment, she said he picked her up from the couch, took her to the bed and pinned her down. She said she tried to refuse his requests that she perform oral sex on him and that he masturbated over her.

She said during the incident that she had said no several times.

The woman’s lawyer had objected to her appearing in person, saying being forced to testify publicly could cause her further trauma.

Doe herself said she was also fearful of testifying, saying she was terrified and was physically ill before the hearing.

Von Ehlinger admitted he took Doe to dinner and that he considered the meeting a date. But his attorney advised him not to answer questions about any sexual activity that took place.

The legislator’s attorney, Edward Dindinger, questioned the accuser about her motivation for dating the representative, whether she was in it for monetary gain. But attorneys representing the woman complained about many of his lines of interrogation. Dindinger became visibly frustrated by what he viewed as his inability to cross-examine her and try to reveal inconsistencies in her testimony.

Attorneys for the ethics committee called witnesses who testified that the incident was part of a pattern of behavior by von Ehlinger. They called for testimony of a second woman – a former security guard at the Capitol – whom von Ehlinger dated earlier this year. She testified that she saw him socially twice, even going up to his apartment to view his firearms. She said they had a sexual encounter during that second date that she described as uncomfortable and awkward.

They also heard from a House staff member who testified that von Ehlinger asked her for a date earlier this year. She declined, saying she was married, then went to her boss, the chief clerk of the House, to ask for advice for how to proceed. She sent an email to von Ehlinger expressing her discomfort with his dating request. Dindinger noted that she hadn’t been wearing a wedding ring, which may have confused the representative about her relationship status.

Several times, Dindinger made the point that the Idaho Legislature has no formal policy that forbids lawmakers from dating legislative staff. Several House members testified to that. House Speaker Scott Bedke confirmed it, but said there are informal rules about intra-Capitol relationship that are conveyed to lawmakers during training classes at the beginning of each legislative session.

The hearing took a turn when one of the legislators called to testify, Rep. Priscilla Giddings, testified she was recently accosted by Jane Doe outside the Capitol one day while returning from lunch. Giddings said she didn’t recognize the woman, but her companion, Rep. Heather Scott, did. Giddings says Ms. Doe accused her of ruining her life by publicizing Ms. Doe’s name and falsehoods about her in connection with the complaint against von Ehlinger. Giddings testified that she had posted a link to a news article about the case in her weekly newsletter. The article included the woman’s name, though Giddings testified that she hadn’t been sure of that because she hadn’t read the full article. Giddings said she believed the investigation was no longer active and because of that, since Rep. von Ehlinger’s name had been released as part of the investigation, that it was fair for the woman’s name to be publicly released.

Doe said she feared releasing her identity would put her and her young child in danger.

After about five hours of testimony, Ethics Committee members voted to take the evening to process the information and come back Thursday morning to deliberate their next steps.

Analysis: A Bad Week And A Rough Session For The Idaho Legislature (And The Facts)

The 2021 Idaho Legislature took its ugliest turn on its 108th day, when the House Ethics Committee weighed a sexual assault complaint against first-year Rep. Aaron von Ehlinger. Continue Reading Analysis: A Bad Week And A Rough Session For The Idaho Legislature (And The Facts)