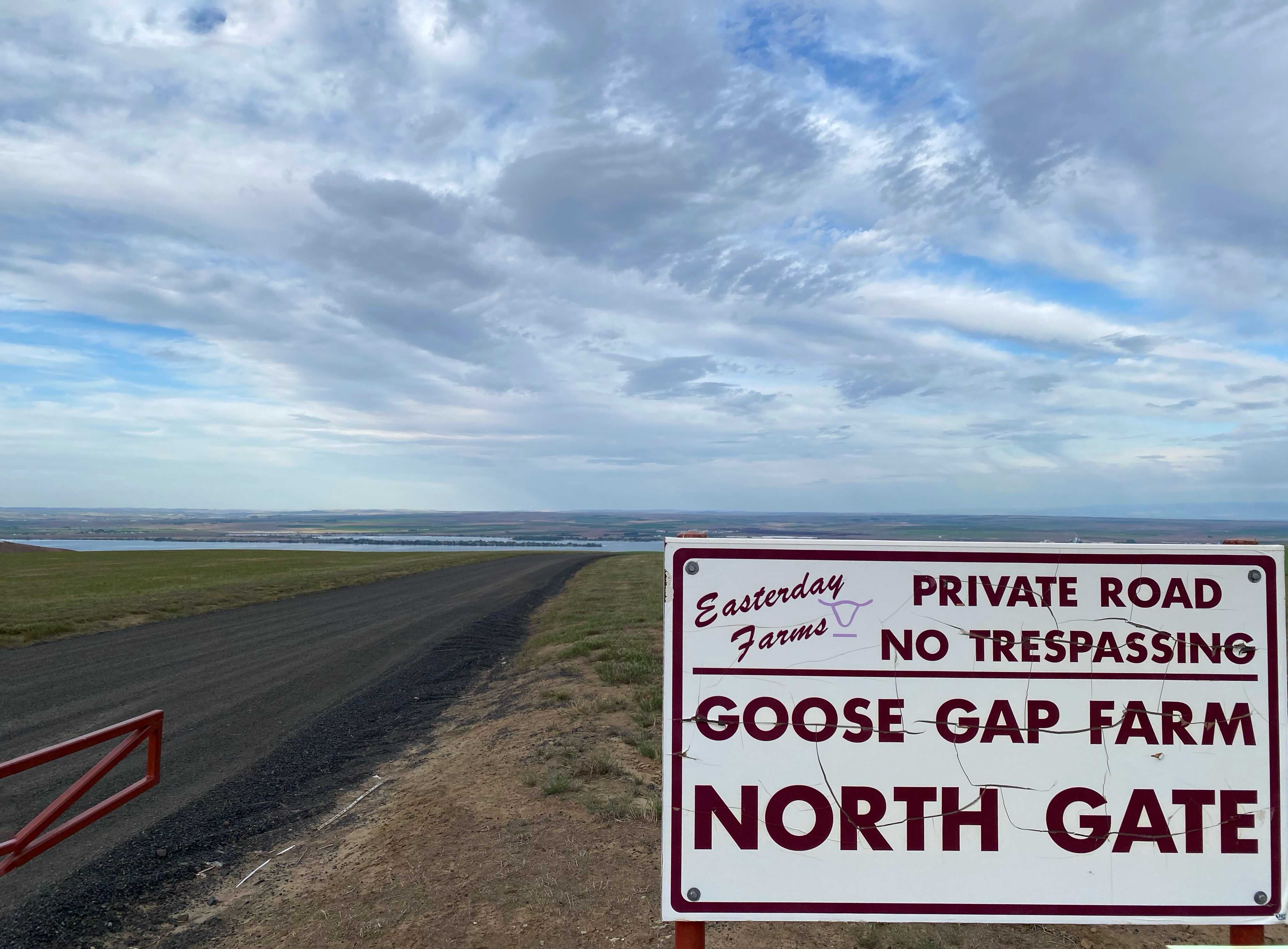 Nearly 12,000 acres of Easterday family farmland in Benton County will likely sell for more than its $210 million asking price, according to court documents and sources with knowledge of the deal.

Two big players are vying for the sweeping property near the Columbia River: Farmland Reserve’s AgriNorthwest, which is backed by the The Church of Jesus Christ of Latter-day Saints, and Seattle-based Bill and Melinda Gates’ Cottonwood Ag Management.

The highest bidder will be confirmed at a bankruptcy auction held next week.

The deal is subject to the federal court’s sale hearing on July 14.

“(Large investors) will go to wherever the opportunity is,” says Denis Hayes, president of the Bullitt Foundation in Seattle, which funds environmental projects in the Northwest. “If you’re going to be buying a farm, and if you can get it in particular in a place where you’re guaranteed access forever to high-quality water, that makes it a very attractive investment whether you’re Chinese, or Dutch or American,” he says.

The large-scale bankruptcy began with a massive swindle of 225,000 ghost cattle and has meant federal charges for Cody Easterday, and bankruptcy for a family farming and ranching dynasty as the vast Easterday empire unravels.

Much of the ground has been planted in wheat to keep weeds down and the soil in place. Those crops will need to be harvested soon.

The actual auction isn’t public. Usually the bankruptcy auctions are held at the debtor’s council offices, but because of COVID-19 this auction will be held on video conference. But the sale price will be disclosed as part of the public bankruptcy hearing in July.

Following federal approval of the sale, parties will work toward a plan, or multiple Chapter 11 plans, to liquidate the Easterday Ranches and Easterday Farms. That could take several months.

Per a bankruptcy cooperation agreement, the money from the sale will first pay the secured mortgage holders, then the remaining proceeds will go into escrow funds to be divided among Easterday Ranches and Easterday Farms’ secured and unsecured creditors, as well as pay the administrative costs of the bankruptcy.

AgriNorthwest was promised a 2.75 percent “break up fee” based on the sale price if it lost the land deal, plus an additional $1.5 million dollars, court documents say. AgriNorthwest had also promised an additional $5 million to the bankruptcy creditors to help offset the costs of a Chapter 11 liquidation plan for Easterday Ranches and Easterday Farms.

In order to hold an auction, at least one other bidder had to come in with more than $1 million over the stalking horse bid.

Enter Cottonwood Ag Management, run by Cascade Investment, LLC, for Bill and Melinda Gates. The investment firm has become controversial after an article in the trade journal Land Report earlier this year revealed that the Gates’ land group is another one of the largest farmland owners in the United States. It’s also unclear how the couple’s divorce and Bill Gates’ questionable conduct, reported earlier this spring, could affect the sale.

Although it’s now certain that there will be an auction, that doesn’t mean Cottonwood or AgriNorthwest will prevail with the final bid. Several other entities are also vying for the land deal: controversial Northwest ag tycoon Frank Tiegs; potato-growing-giant Simplot; and Homestead Capital, a San Francisco-based investment firm trained on acquiring U.S. agricultural lands.

“Blossom as the rose”

Bidding for a swath of prime earth the size of the Easterday deal takes serious money. It discourages all but the most affluent buyers by its sheer size. But there are several reasons why the Gates’ land acquisition arm and the LDS church want to — and can — compete for the property.

Church-owned AgriNorthwest is already a massive entity in the Columbia Basin, with some 100,000 acres in Washington and Oregon. Its many unmarked white pickup trucks roam section-line farm roads like sentries, overseeing thousands of acres of potatoes, onions, corn, carrots and other rotational crops. 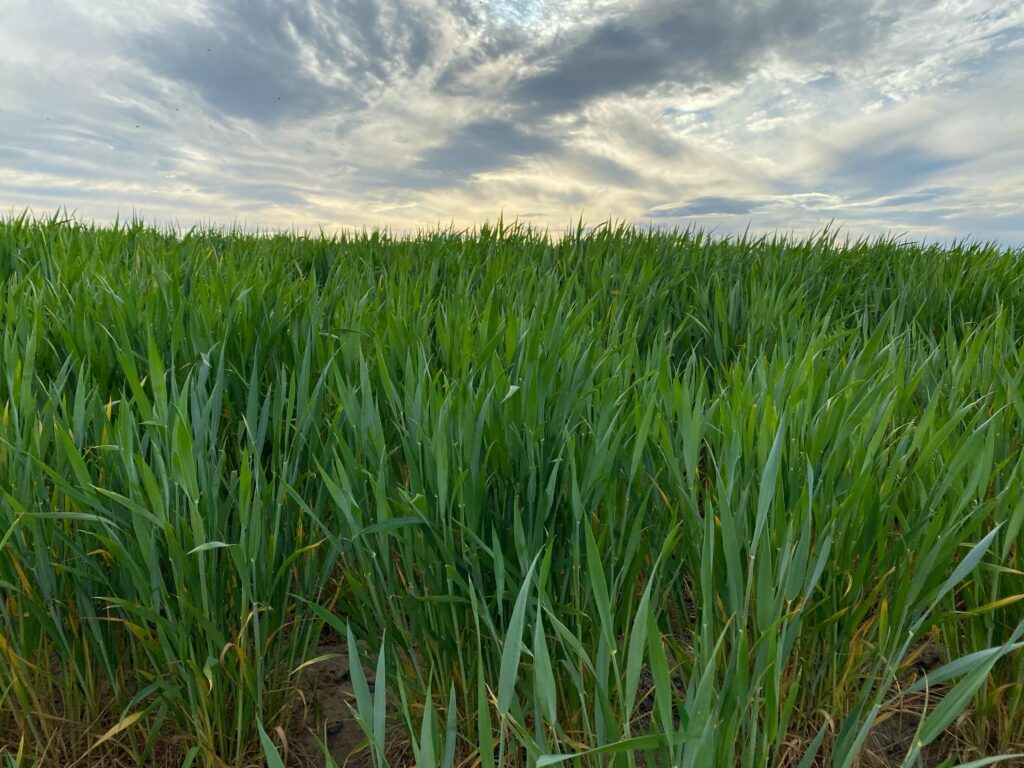 Verdant fields dot the basalt benches above the Columbia River near Goose Gap Farm, an Easterday property that’s about to be auctioned off in a bankruptcy stemming from a swindle of 225,000 cattle. CREDIT: Anna King/N3

Farming is knit into the fabric of the LDS church, says Betsy Gaines Quammen, a historian, conservationist and writer. In her doctoral dissertation for Montana State University, which she turned into a book published last year, she argues that the way Mormons view land ownership is shaped by the faith’s own history and texts.

In the LDS faith, she says God promised a homeland — known as Zion. But believers were run out of Missouri, Ohio and Illinois before heading West to the Great Basin in Utah. They established their homeland there, displacing Native Americans, and learned to farm using irrigation methods.

“The Mormon church has been very interested throughout its history in acquiring land and using land,” Gaines Quammen says. “It’s a sacred promise that God, by the way of Joseph Smith, to ensure that the Mormon people had land.”

A futuristic vision of food and water shortages is baked into the religion. Even “latter days” is in the religion’s name, Gaines Quammen says. And this shortage, or time of disruption, could last a long time. So, she explains, shoring up food insecurity with their own farms is considered a top priority.

“There are varieties of ways in visualizing ‘latter days,’” Gaines Quammen says. “But there is an imperative in the way the church operates to prepare for a time of struggle and by acquiring land, this is an act of preparation.”

The church is affluent and further building the coffers is a godly thing to do to help prepare, Gaines Quammen says.

“In terms of thinking about latter days, acquiring land, especially agricultural land, land that could raise food, would be advantageous if there were a big religious event,” she says.

The church often references the Bible’s Old Testament. Although there are many versions, the often-quoted verse from Isaiah goes: “The wilderness and the solitary place shall be glad for them; and the desert shall rejoice and blossom as the rose.” So, farming is considered a religious, sacred practice within the Mormon faith, Gaines Quammen says.

For the Gates, buying up farmland rich with water rights might also be a play for long-term security in a disruptive changing climate.

Hayes, with the Seattle environmental foundation, says as the coming climate crisis has grown clearer and clearer, people who worried about it five years ago are now becoming extremely concerned.

“If you can say for sure that the world will be less agriculturally productive decades in the future,” Hayes says, “that there will be more droughts and more floods in the future. And that there’s going to be more people in the future — you add all those together and agriculture looks like a fairly smart place to place a bet. Particularly if that land happens to be placed right next to one of the largest rivers in North America.”

There are more major deals going down in the Northwest, with large corporations buying into areas where they previously had no connection. Examples include: several major farmland deals by Othello Blueberry; the industry-shocking $8.3 million Aquilini deal on red-wine-mecca Red Mountain; and the recent $288 million turnover of the well-known Broetje Orchards.

The Gates have already gotten a taste of the Mid-Columbia. They recently bought a massive 14,500-acre swath of land near the Easterday land for $171 million. But the Gates family may need agreement between the divorcing couple, and a reliable farming tenant, to run a new operation. 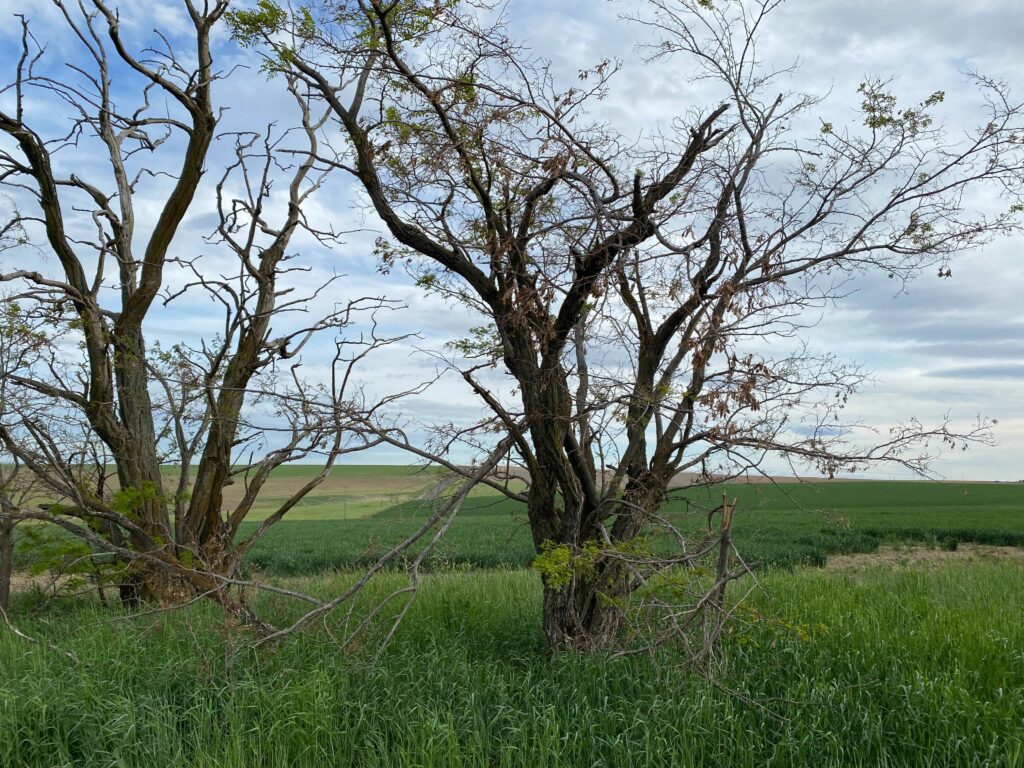 Old, gnarled trees watch over crops near Goose Gap Farm, an Easterday property that is up for sale as part of a bankruptcy auction. CREDIT: Anna King/N3

Darryll Olsen, who leads the Columbia-Snake River Irrigators Association, says this is a new era of farming in the West. Stashing money in agricultural lands is a solid investment for the long term if you have stable water supplies, such as the Columbia River water rights these up-for-sale farms hold, Olsen explains.

“All you have to do is put your head out the window and look about 800 miles to the south (from Washington) and see what’s going on,” he says. “California is losing water. And you’ve got problems in the Klamath (Oregon). Texas groundwater is drying up. Arizona doesn’t have that much irrigated acres left. In other areas of the West irrigated ground is declining. There are no other solid water supplies like the mainstem Columbia River anywhere else.”

Neal Goplin, helps large financial institutions lend money on land deals across the Northwest out of his hub in Walla Walla. He’s a bit nostalgic for the small family farm, like the place he grew up in North Dakota. It’s good to have land values hold up, but he says it’s hard for family operations to expand or keep pace in the Columbia Basin.

“Smaller players are getting forced out,” he says. “That’s happening quicker than people expected.”

He says the giant players will take a lot of the decision-making on the landscape away from the region.

“The earnings don’t necessarily come back to the area,” he says. “In a lot of ways you still have the same number of workers out there, it’s just they aren’t tied to the land the same as the family farm ownership always has been in the past.”

Perhaps the urgency of this giant New West deal tempting these two economic titans — the Gates and the LDS church —  can best be summed up by a line often attributed to author Mark Twain: “Buy land, they aren’t making it anymore.”