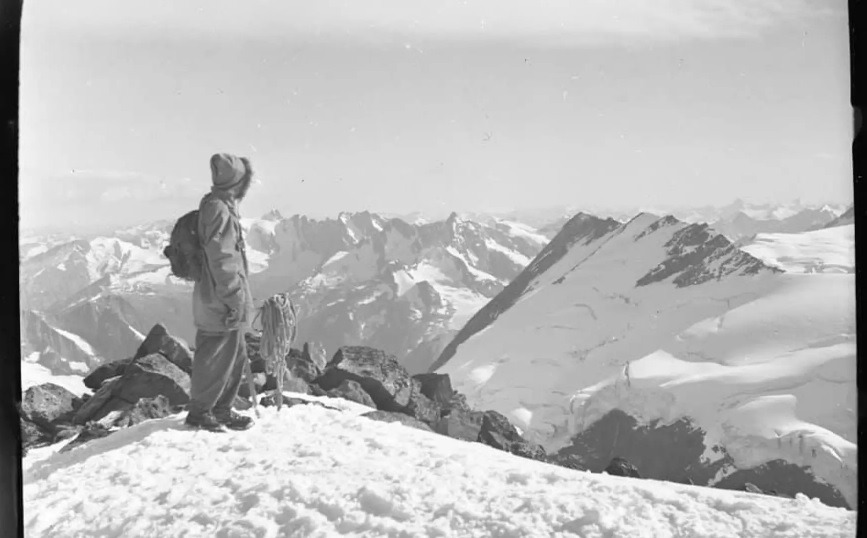 Fifty dollars bought one woman a piece of Northwest mountaineering history. And, she’s sharing it.

When a moving box full of negatives arrived on Jodi Zybul’s doorstep, she wasn’t entirely certain what she might find inside, or whose memories she might rummage through.

She’d scanned through her own family’s history for the past two years: negatives her grandfather had taken in 1914 and boxes of photos her grandmother had saved from the 1980s.

Zybul needed a break from all the familiar faces. A box of negatives she saw in an online auction at a Tacoma Goodwill seemed an interesting enough break.

Her winning bid didn’t cost much, she said, around $50. The 987 negatives in the moving box were hers.

“I had absolutely no clue what was on the negatives,” she said. “The listing had a photo of a couple of the negatives with light shining through. It showed a couple people.”

One man’s trash, right? But, once she saw the images, she knew these treasures had to be shared.

Searching through the negatives, Zybul got a peek into the Northwest’s rich mountaineering history. Images from the 1940s through 1960s. Photographs labeled as a first ascent up Mount Sir Donald in British Columbia, diagrams of routes climbers took, mountaineers roped together on ridgelines, F-stops and shutter speeds were part of the photo treasure trove.

A man with glasses, a beard and a birthmark stood out. Maybe he took the photos, Zybul guessed. After all, several family photos showed him in front of a new house and lounging on a couch with friends. “All real casual,” she said.

“None of the photos of him are labeled. In my experience, as an amateur photographer, I always label people except for my photos,” Zybul said. “Why am I going to label a photo of myself? I know who I am.”

So began her year-long search.

One of the first people she reached out to was historian Lowell Skoog.

‘How we got here’
Lowell Skoog’s family is steeped in the Northwest’s outdoor recreational history. Now retired, Skoog volunteers as a historian for the Seattle branch of The Mountaineers, the largest arm of the club where adventurers learn to climb mountains, backcountry ski, scramble, and snowshoe.

Skoog said he’s always been interested in history. So much so that he’s writing a ski-mountaineering book, due on shelves next month.

“I think it’s always good to have a sense of how we got here and to evaluate where we are and where we’re going,” Skoog said.

Early mountaineers didn’t always live in the region, he said. They’d travel to the Northwest to scale Mount Rainier or Mount Baker. Then, mountaineering clubs began to form in Portland, Spokane and Seattle.

“They were really interested in exploring local mountains in more depth,” Skoog said.

In the early 1900s, The Mountaineers would organize large outings in places like the Olympic Peninsula, Mount Rainier, or Glacier Peak.

Those sorts of trips carried on until around World War II. After that, people more often adventured by themselves, without the complex outings of mountaineering clubs, he said.

These days, the internet, and the need for outdoor activities during the Covid-19 pandemic, have sent even more people to the Northwest mountains.

However, it’s a changed world from early mountaineering days.

These conditions could be a new reality of climate change, Skoog said, something that’s worrying many mountaineers.

“For people like me who have a lot of experience in the local mountains, it’s just kind of heartbreaking to see the glaciers melting away,” he said.

It’s important to document how things have changed, Skoog said, including Zybul’s find.

The negatives Zybul found might not show major first ascents, he said, but they are rare – no matter who snapped them. The negatives show a group of friends who scaled the Cascades, often dubbed the American Alps.

“The fact that you didn’t have Instagram in the 1950s, any photos you find from that time are extra interesting,” he said.

‘A secret entry’
Photos like the ones Zybul found have an interest to Nicolette Bromberg, the visual materials curator for the University of Washington’s special collections library.

Bromberg said the university’s collection of mountaineering photos is one of the largest in the Northwest.

One of the biggest collections came from The Mountaineers, Bromberg said. Everything from journals to mountaineering registries to photo albums. A former curator was a member of the club, she said, so the collection is vast.

“We have a secret entry into what life was like in the imagery we have,” Bromberg said. “When you look at the photos and you see what people were doing or what they were wearing, what was going on at that time, it’s a whole different world.”

Bromberg said researchers use the collection to study all aspects of life in the Northwest, including early women mountaineers, who climbed in skirts; the mountains themselves, and their disappearing glaciers; important community members who ventured outdoors, such as Seattle’s Edmond Meany, a state lawmaker, historian and climber.

“A lot of famous mountaineers come from the Northwest,” she said. “Mountaineering is really integral to the Northwest. It’s really a part of our culture here. Even if I don’t climb mountains, the fact that people are on those mountains, I’m aware of that.”

“We are supremely fortunate to have some of the best and most accessible climbing and mountaineering in the world in our backyard,” he said.

Sheedy has taught many others to enjoy the Cascades and Blue Mountains. Looking to the future can help you remember the past, he said.

“I am regularly reminded of the importance of the mountaineers who came before me and helped guide the way for what was possible in our region,” Sheedy said.

Meanwhile, at her home in California, Jodi Zybul wanted to identify the bearded man. She still didn’t have any leads.

She reached out on Facebook. She scanned search results on Google. She contacted experts in the field.

Then, one day, she found a photo she hadn’t noticed before, with a name scrawled on a label.

Worthie Doyle.
Was this the bearded man who stood in front of his house? Who adventured with friends across the Northwest?

“Worthie had white hair when I first met him,” his daughter-in-law Becki Gaddum said in an email.

Gaddum had married Doyle’s stepson, Stephen. Both men passed away years ago.

Gaddum said she’d met Doyle in Port Orchard, Washington, where similar pictures hung on the wall of his home.

Doyle’s love of the outdoors was a life-long passion, according to his obituary in the Kitsap Sun. “Mr. Doyle was an expert snow skier and avid mountain climber, having climbed Mount Rainier twice. This sport took him to California, British Columbia and Norway.”

Gaddum said she still has a tub of photos from his outdoor adventures, some of which Zybul hopes to repeat.

Zybul is planning to hike and photograph Yosemite National Park this winter, retracing the path of the photos in Doyle’s collection.

“His photos inspired me to really get into the sport,” Zybul said. “I’m really looking forward to getting to experience nature at Yosemite.” 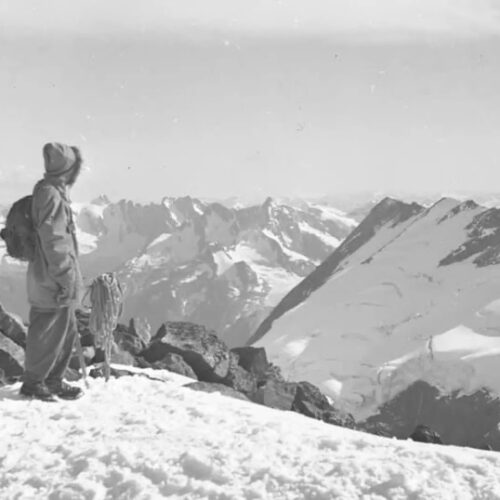