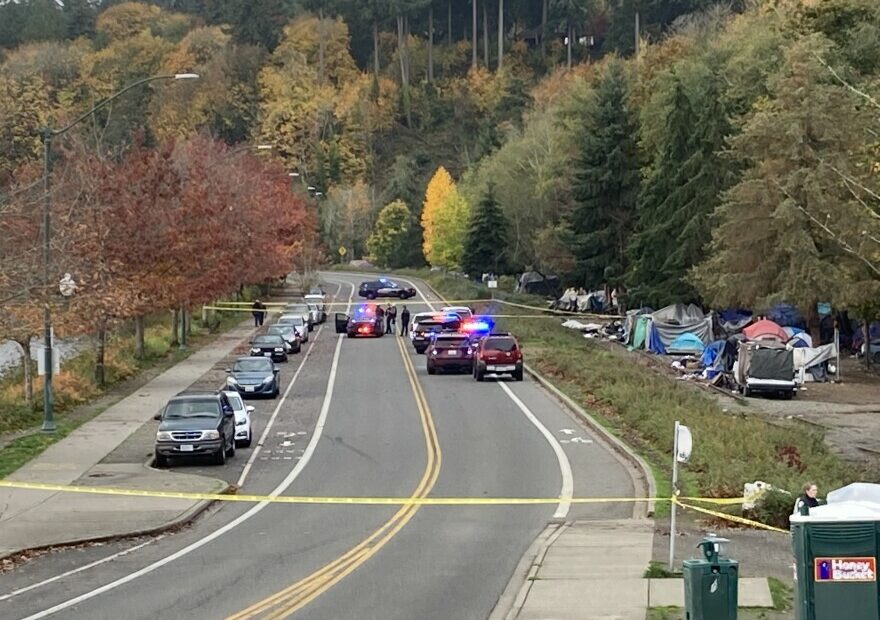 For the third time this month, Deschutes Parkway, which curves past Capitol Lake along the edge of Washington’s Capitol Campus, has been closed due to a violent crime.

On Wednesday afternoon, Washington State Patrol troopers blocked off a nearly mile-long section of the wide boulevard for a few hours following a midday shooting that sent one man to the hospital with non-life-threatening injuries.

According to the patrol, the man was shot after an argument with another man who fled the scene in a vehicle. The suspect was later arrested in Grays Harbor County, according to Sgt. Darren Wright, a State Patrol spokesperson.

The shooting is just the latest violent incident this month to close a portion of Deschutes Parkway across from a large, unsanctioned homeless encampment.

In the first incident, on October 5, a 47-year-old man was found dead in a sleeping bag under a city-owned bridge adjacent to Deschutes Parkway, according to reporting by The Olympian. An autopsy revealed the victim had sustained head and face trauma. A 24-year-old man was later arrested and jailed on suspicion of second-degree murder in the case.

Then, on October 15, the same stretch of Deschutes Parkway was again closed following an early morning shooting that sent a 60-year-old man to the hospital with multiple gunshot wounds to the leg, according to The Olympian.

The suspect in that shooting is also still at large, Wright said Wednesday. He added that the shootings did not appear to be connected.

Separately, the State Patrol continues to investigate a murder that happened in November 2019 along Deschutes Parkway. In that case, shots were fired and the victim was found lying face down next to the lake. Surveillance video showed a person with a backpack running away from the area where the shooting happened. No arrests have been made in that case.

Deschutes Parkway is a popular area for runners, bikers and dog walkers. A gravel and paved path hugs the shoreline of Capitol Lake. The lakefront property belongs to the state and is considered part of the Capitol Campus.

The sprawling homeless encampment, with its blue tarps and tents, sits across the road and is on private and railroad-owned property within the jurisdiction of the city of Olympia, according to the Washington Department of Enterprise Services (DES).

Because of the side-by-side jurisdictional boundaries in the area, the Olympia Police Department investigated the October 5 murder, while the State Patrol took charge of investigating the October 15 shooting, as well as Wednesday’s shooting.

In addition to the recent violence, a spokesperson for DES said the agency has been dealing with frequent graffiti and the daily dumping of trash along Deschutes Parkway and at nearby Marathon Park.

In recent weeks the homeless encampment along Deschutes Parkway has also been the source of complaints from nearby residents. One homeowner told KING 5 News that he discovered water and electricity from his house were being siphoned down to the camp.

A city of Olympia spokesperson told KING TV that the city was providing porta potties and trash clean-up to the encampment, as well as regularly patrolling the area.

Previously, Deschutes Parkway was also the site of extensive RV camping. However, the state ended that practice in May when it banned overnight parking along paved areas of the roadway.

On Wednesday, yellow police tape blocked the path of both residents of the encampment and walkers and joggers along Capitol Lake.

“We want people to feel safe while they’re walking around down here,” Wright said. “We’ll continue to monitor what we can do to make it safer for everybody.”

This story has been updated to include the arrest of the suspect in the shooting on Oct. 27 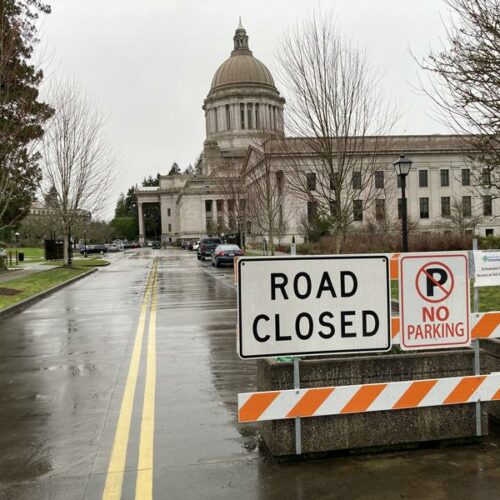 Vehicle Checkpoints And Fencing Are Gone, But Security Concerns Remain At Washington’s Capitol

Gone are the State Patrol checkpoints and National Guard troops that were in place for the start of the session in January. A temporary chain-link fence surrounding the domed Legislative Building has also been removed. Yet, security in the seat of state government is still a top-of-mind issue. So is the safety of elected leaders in these polarized times. Continue Reading Vehicle Checkpoints And Fencing Are Gone, But Security Concerns Remain At Washington’s Capitol