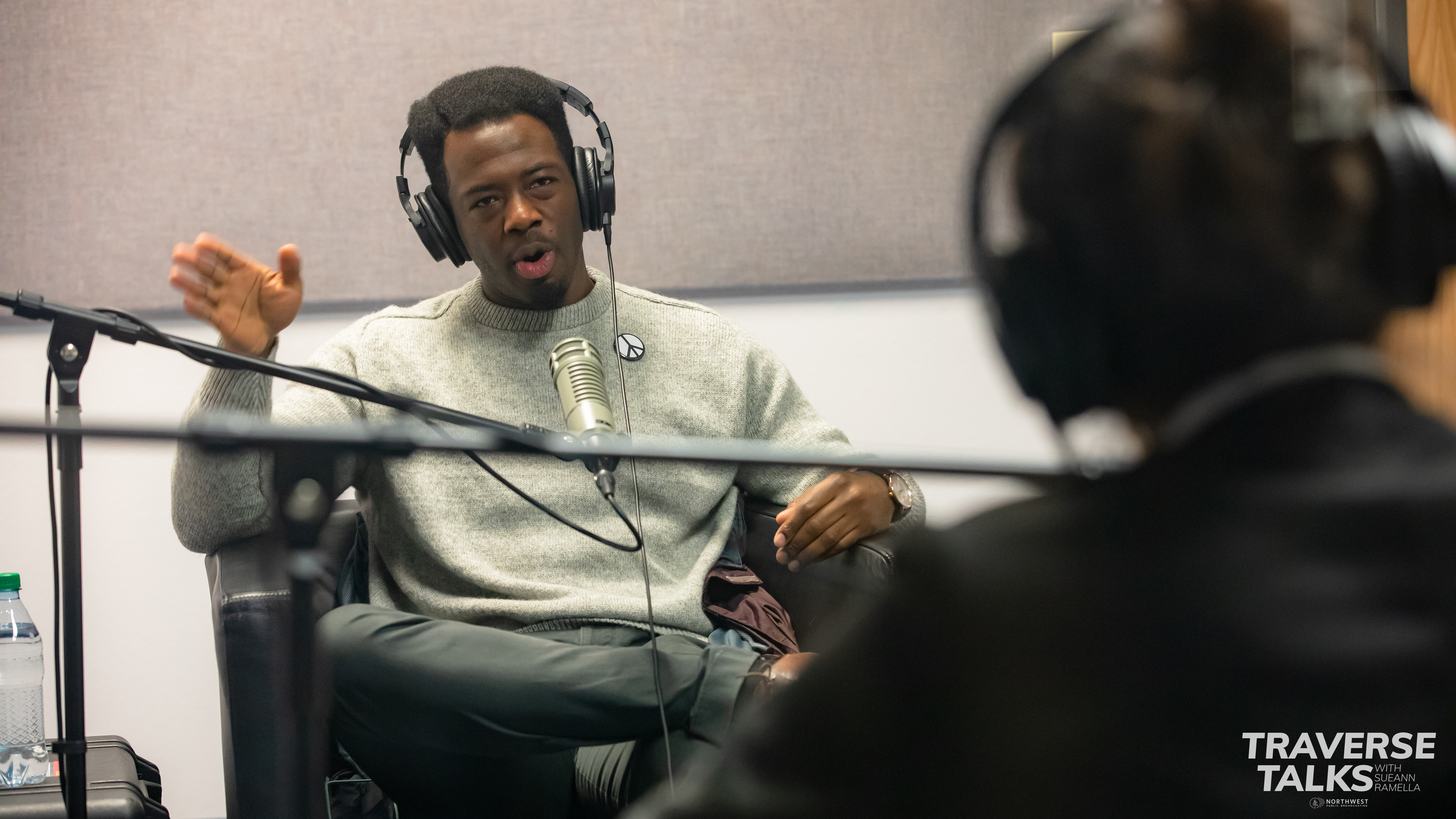 Peace campaigner and humanitarian, Kwabi Amoah-Forson, journeyed across America asking people what “peace” means to them. From Tacoma, Washington to Washington, D.C. Kwabi traveled in a baby blue Mitsubishi van known as The Peace Bus delivering humanitarian aid and learning how to best advocate for long-term change. In this episode of Traverse Talks with Sueann Ramella, Kwabi explains that in order to create peace, “we must create opportunity for everyone.” To illustrate this idea, Kwabi describes a concept he calls “Band-Aid safety” explaining that the only real way to create intrinsic safety is to ensure that everyone has their basic needs met.  Also hear Sueann and Kwabi discuss the complexities of living as a second generation immigrant in America, the stigmatization around accepting help from others and why Kwabi still has faith in humanity.

Traverse Talks With Sueann Ramella
What Does Peace Mean to You? – With Peace Campaigner Kwabi Amoah-Forson

Sueann Ramella: Kwabi, let’s talk about the Peace Bus. How did you get your Mitsubishi and turn it into the Peace Bus? 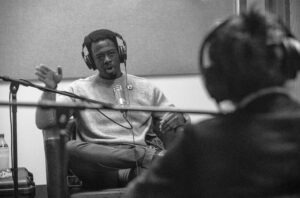 Kwabi Amoah-Forson (left) and Sueann Ramella (right) having a conversation about peace.

Kwabi Amoah-Forson: Back in 2018, I was in grad school. I was still sort of trying to figure out what I wanted to do with my life. So I went to an old academic advisor of mine, a very, very wise person. And I sat down with him and I explained to him my plight and he said, “Kwabi, what you need to ask yourself is, who do you wanna be? And not what do you want to be?” He’s like, “You’re a very capable gentleman. You could be a lawyer, you could be a doctor. You could be all sorts of things, but that’s not the question. What are the principles you wanna embody? What are the things at your core that you really love and enjoy?” And I was like, “Whoa, I’ve never asked myself that question.” And my mind was blown! Who do I wanna be as a person? I was like, “Well, I do know that at my core, I love seeing people from different walks of life, colors, creeds, races, religions coming together for a great cause, it gives me goosebumps to think of this.” And then I was like, “Well, that’s like peace, right?” So I made these little peace posters. One said, “Love, peace and justice for all.” The other one said, “War is not the answer, say no to violence.” And went to the park every Saturday, I would sit there in a chair with these posters. People would come up and ask me what I’m selling. I’d say, “I’m not selling anything.”

Kwabi: Right? At first it was awkward, but eventually people started opening up, and then it became a culture of this park I was at and I did this for several months, and then it compelled me to travel. Took my tax return and I bought this Mitsubishi van from this guy named Jake on Vashon Island. And Jake was awesome. I was like, “Yeah, I wanna use it for peace. I wanna create a peace mobile.” And he was like, “That’s awesome, man. I dig that.” So I bought it from him. I painted it blue, put the Peace Bus on the side of it and started driving it around.

What “Peace” Means To The Peace Campaigner:

Sueann: Now I have to ask you, I mean, I have a general term of what peace means to me, but I really honestly, for wanting it don’t really know much deeper about it. So tell me what peace is to you.

Kwabi: This is an overall consensus of what I’ve learned through asking the question with hundreds of people. So there’s two things I wanna expound on, one being what a peaceful world could look like more so. And from what I’ve gathered, living in a more peaceful society, is a society where everyone has their essential needs met. Everyone has food, clothes and shelter, these sorts of things. And beyond that principal standpoint, there’s three different kinds of peace. There’s inner peace. You get this from a sense of understanding of self. We get this from a sense of religion, sometimes just an understanding of who we are as human beings. And then there’s interpersonal peace. How can we show love and respect towards our fellow human beings? And how can we do that more readily? And then the third being diplomatic peace, how is China fairing with India, the United States with Russia? These sort of things. 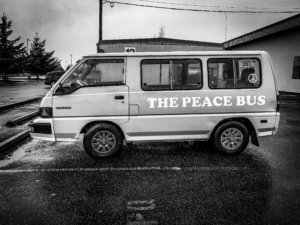 Sueann: How has the reception been where you travel with the Peace Bus?

Kwabi: I would say, depending on where I’m at in the United States, the reception’s different. A lot of young adults and adults are really interested in the concept of peace, knowing more so its concrete values, and really having it be embedded in the concept of justice. And that’s sort of been different in crossing around the country and whatnot. I’ve rarely seldom come across someone who was like, “Peace? Nah, don’t want that. That’s not something for me.”

Everyone Benefits From Helping Those Who Have Been Disenfranchised:

Sueann: How do we get people to empathize with others?

Kwabi: There are people that we’re not gonna able to reach in regards to empathy. They don’t have empathy, for anybody, anywhere. That’s fine. What I’m saying is if you are selfish, yes, be selfish, but realize that for yourself, it is for your benefit to help those who have been disenfranchised.

Sueann: I’m trying to imagine this conversation tonight with my father, when I tell him about you and about this idea, you know, dad, it’d be better for you, you wouldn’t have to have this gate in front of your house if you made sure the children were fed. And you actually went out there and gave them the money and made these programs happen.

Kwabi: Right, and it’s even beyond safety. Safety’s great, but it’s even beyond that. Take something, for example, cancer, we’re all affected by it. But the cure for that lays dormant in a child, who is in poverty and because they don’t have the means towards reaching that level, to be able to put that into the world. 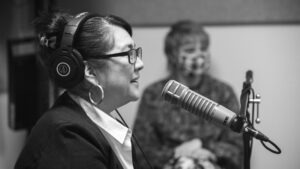 Sueann reacts to Kwabi during their interview. Producer Ashley Beard sits in the background.

Sueann: You have so much faith in humanity. How did this happen with you? How did your parents raise you?

Kwabi: I never stopped to think, oh, this is a problem, well, that’s just how it is. Like, okay, that’s a problem, how can we fix it? What can we really do in order to mend that gap? And this is sort of my upbringing all throughout my childhood. Also, there’s no limits, right? A lot of people have these barriers in their mind like, “Okay, well, I’m here, now I’m gonna stay here.” And for some that’s okay. I’m not asking everyone to get a blue bus, and drive it around and smile at people and throw up peace signs. That’s not for everyone, but whatever you want to do, know that it’s possible. And I think time and time again, we look at humanity and see things that seem so impossible. And then someone does it and you’re like, “Oh, I guess it’s possible.”