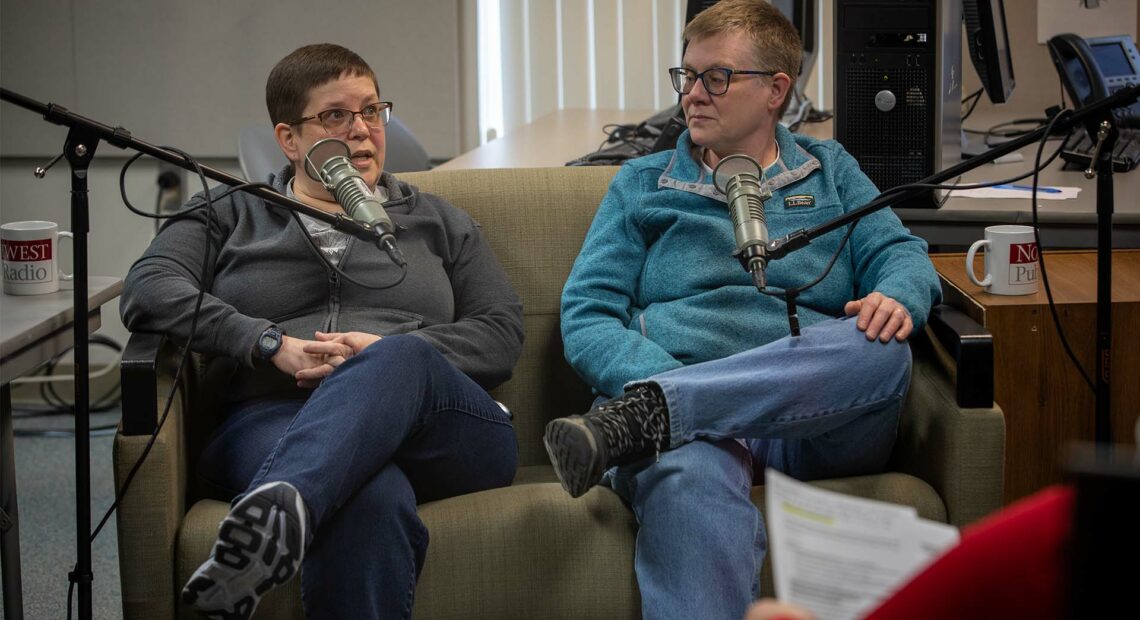 Wives Tabitha Simmons and Kathy Sprague of Moscow, Idaho were one of the first same-sex couples married in the state of Idaho. The two, who have been together for over 30 years, also run a business together – Safari Pearl, a comic book and game store, with Eclectica, an adult store, in the back. The couple, their business and their joint project, TabiKat Productions, function as pillars of the local queer community. In this episode of Traverse Talks with Sueann Ramella, they talk about their marriage, their lives as older members of the LGBTQIA+ community and how their businesses reflects their principles. Listen to their episode below or stream, wherever you get your podcasts.

Traverse Talks With Sueann Ramella
How Many Lives Does a TabiKat Live? – With Moscow Duo Kathy Sprague and Tabitha Simmons

Being Out And Proud Role Models In A Conservative Area:

Sueann Ramella: So you had been together to weather the political issues of getting these licenses. Does that stress wear on you as a couple or does it unite you more?

Kathy Sprague: You know, when Trump won, I was ready to sell everything and just head for the hills. And at that point Tabitha said “No. We have to continue to hold space. It’s even more important. It’s vitally important for these kids that we remain here.”

Sueann: Tabitha, why did you think about them and not yourself?

Tabitha Simmons: Many of them over the years have thought of us as the mom they wanted to have. There are a lot of those kids that were not in good places, and sometimes all they needed to see was that we were here and living normal lives, doing everyday things – fighting, coming back together, grocery shopping, all of that. They needed to see that it was possible for them. 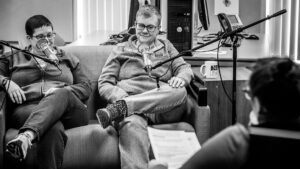 Tabitha (left) and Kathy (middle) sit together in coincidentally identical postures as Sueann (right, foreground) asks them a question.

Sueann: I assume because they felt so othered?

Tabitha: Yeah. It was just that we needed to be there and we needed to continue making that space for them to be themselves and be seen and accepted. As long as they were willing to be respectful of everyone else that was there, doesn’t matter who they are.

Life, Death And The Love In Between:

Kathy: We came out.

Sueann: Can you describe that moment and take us back in time because I’m assuming this was in the early ’80s.

Kathy: It was 1983. We had, we palled around, we were cover for each other for a long time and we had a falling out and then he came back to town and was very ill. And I knew before I talked to him, ’cause I had been living in Seattle on Capitol Hill and I had watched a lot of the men in my neighborhood die. It, it was not a great time. But I was there with him when he died.

Sueann: So you have an intimate knowledge of death. What is it that people should understand about dying? 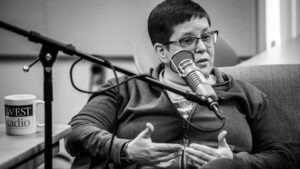 Tabitha, the Tabi of TabiKat Productions, gestures with her hands while answering a question.

Kathy: Don’t be as afraid of it as our culture makes you be afraid.

Tabitha: We’ve done hospice twice now for two people. A good friend, who was there for me and held space when I was young, died last summer and we took a few of the shifts with her. I think when you get there, you develop the skills to come to terms with being there and that it’s okay to not have them now. That’s sure how it seemed with both of them.

Kathy: And the second experience was amazing because it was mostly women from her church – taking shifts, doing the hospice care – and then me and Tabitha. Our country is so divided and there really is no need for that. There is absolutely no reason we cannot meet each other on common ground.

Tabitha: We all want the same things.

Kathy: We wanna take care of our loved ones.

Being A Community Means Being Inclusive:

Sueann: Have you heard that Adam and Eve are going to be opening up here?

Kathy: You know, people go, they check out Adam and Eve. They see what they have in stock. They see the prices. They come over to our store. I think our staff is more comfortable with sex. And our selection is definitely far deeper in certain departments. If you’re trying to appeal and bring in trans customers, but you have one packy and no binders and nothing for trans women as well. We cater to a broader market. 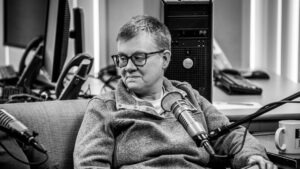 Kathy, the Kat of TabiKat Productions, watches Tabitha as she answers a question during the interview.

Tabitha: I mean, think about it. When you have a shoe store in the mall, you’ll have a competing shoe store open right across the way because that’s going to allow their customers to increase cognitive dissonance and know that they’ve made the right choice. So, actually, another store is a good thing.

Sueann: I have a question for you about what they call “rainbow capitalism” – have you heard of this? So, there’s a cause – gay rights – and you have your rainbow symbol, and then it gets, what I would say is, co-opted by the capitalist machine. So we make things for you to buy, but it’s not necessarily money going back to a cause. It’s just to make somebody money. What do you think about rainbow capitalism?

Kathy: You know, Adam and Eve has the poster in their window with the rainbow that says “we’re inclusive,” but they have one packer on the wall for the trans man and it’s white. And that is not the skin tone we sell the most of in our store. So you can put a sign on your door, you can put a sign in the window, and you can paint a rainbow on it, but at the end of the day, are you serving that community?