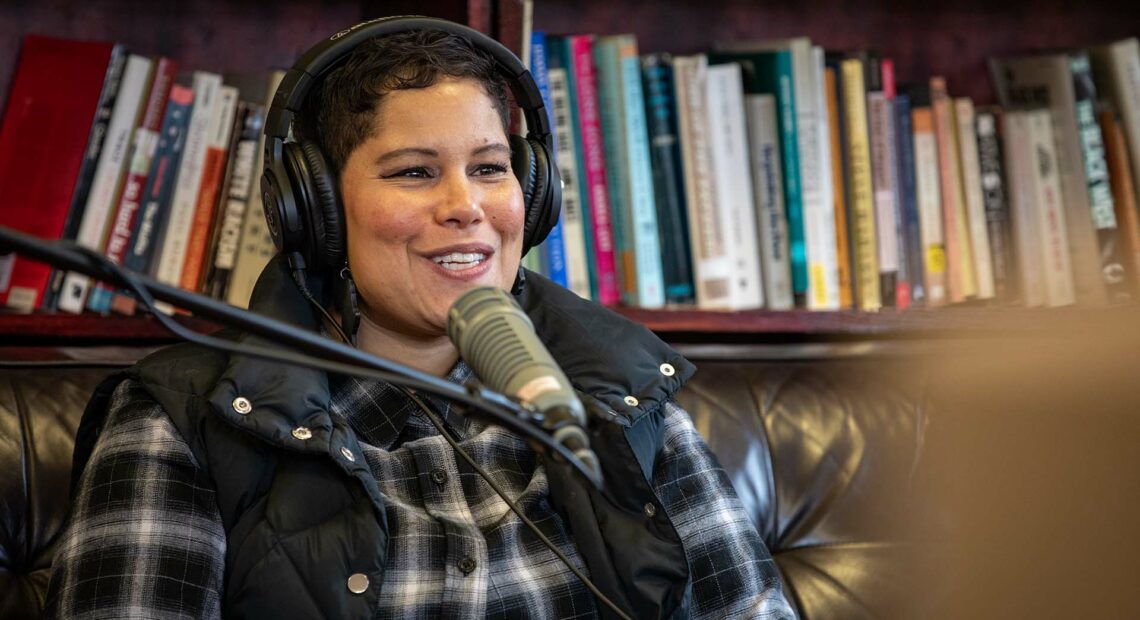 Nikkita Oliver is a Black, queer, Seattle-based creative, community organizer, abolitionist, educator and attorney. They are currently the executive director of Creative Justice, an arts-based program aimed to help youth and work against harmful systems. Nikkita also ran in the 2017 Seattle mayoral election, representing the Seattle Peoples Party. In this episode of Traverse Talks with Sueann Ramella, Nikkita talks about their work with Creative Justice and the importance of abolitionism; generational trauma and tough conversations with elders; and what it means to live uncomfortably. Listen to their episode below or stream wherever you get your podcasts.

Traverse Talks With Sueann Ramella
How Can We Learn To Shape A Better Tomorrow? – With Community Organizer Nikkita Oliver

The What And Why Of Creative Justice:

Sueann Ramella: Can you describe what Creative Justice is?

Nikkita Oliver: In 2014, when the county funding for the arts came through, this woman who saw the No New Youth Jail movement and was in support of it said, “How about – instead of doing what we typically do with public art dollars – how about we invest $250,000 in incubating a program that is arts-based, but is working to dismantle the school-to-prison pipeline?” I served as one of the first teaching artists with the cohort and then was brought on as an advocacy director after that. And we really came to a point of being like, “Is this actually abolitionist? Or are we just being reformists about a system we have very strong critiques about?” So we shifted, and it would just be a safe space to make art, it would be a safe space to talk about, “What’s happening in your community? What’s happening at home? What are you seeing systemically?” So young people still got the benefit of diversion who needed it. But for young folks who just wanted a place to be a part of doing movement work through arts, we were also a place for that. 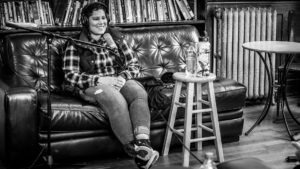 Nikkita sits comfortably on a couch during the interview.

Sueann: Can you tell us a story of a young person that you saw go through the program and what happened to them?

Nikkita: People think that there is a point in time where you go from not doing well to suddenly doing well. And that’s actually not how life works. We had a young person who came to Creative Justice and all they did for their first session with us was sleep. They would come every class, they would eat and they would sleep. Then we got through the session where they slept, and we got to a session where they stayed awake the whole time. And after that session, we got to the place where they started to get into making the art. And over time, that youth ended up getting their GED, they became a youth leadership board member with Creative Justice and now they’ve been with us for almost four years. And I don’t wanna take any credit for that young person’s growth. We just so happened to be a space for them to be able to rest, get a little rejuvenation and then do the work that they needed and wanted to do for theirself.

Sueann: In that moment did you, or were part of you, like, “Oh no, this one’s not gonna make it.”

Nikkita: Not at all. This is not a place where I’m trying to be your authority. And some people would say, “Well, that’s just too lax, Nikkita. That’s not how the world works.” We’re not trying to create a space that’s like how the world works. I’ve just learned time after time that when you allow a young person to actually make decisions about what is best for them, oftentimes in the long run, it actually is best for them. They know a lot about their daily lives. I only see them for four to five hours a week. Who am I to tell them what to do in those four to five hours?

Backgrounds, And Their Impact On Today:

Sueann: How does having a white mom and a Black dad influence you culturally?

Nikkita: I think, like anyone, my parents and their culture and their roots and who they come from has impacted me as a person. I don’t know if it’s so much that my mom is white and my dad is Black, as much as it’s that it is the way that those two things interact. I think that’s unfortunate, right? Because it should actually be the deep beauty of the cultures I come from and our history, and the stories we tell and the music we make and the foods that we eat. You know, those are the things that I would like to talk about shape me, but, if I’m honest, it really is seeing the way in which racism and classism and sexism have unfolded.

Sueann: The struggle and the frustration seem to have more of an impact like that, huh? 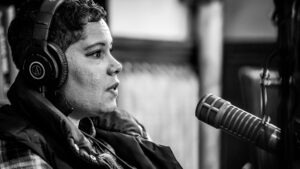 With a serious look on their face, Nikkita answers one of Sueann’s questions.

Nikkita: We live in a really messed up society. It’s not equitable. It is still very racist. And white supremacy is very present – and classism, and sexism, and homophobia and transphobia. All of those things permeate the many institutions that we move through, and that has deeply shaped my life, my work trajectory, the things that I do. My dad was incarcerated multiple times. And you say that and people automatically think “What crime did that person commit?” Which is problematic in and of itself, right? But when I tell them he went to jail because he couldn’t pay the full amount of child support that he owed, they start to ask more questions. My dad rarely could pay the full $1700. And as a result, he was in a cycle of 30 days in jail, 30 days out of jail, and then he lost his job and he lost his car, and you can imagine how that spirals.

Sueann: I find it so interesting that we have a hard time with that knowledge of generational trauma, to see that in some of our elders, right? Because we are just so mad that they don’t see us for who we are, but it’s never even been an option for a whole group of people. So then the burden of this relationship moving forward seems to fall on the younger generation. I think it’s exhausting.

Nikkita: I think it’s exhausting on all sides. This last election, some of my own elders in my community chose to endorse my opponent. And I’m not gonna pretend that as a Black community member, watching Black elders endorse a white woman, who I actually don’t think has the best intentions for all communities in our city, didn’t hurt. At the same time, I can recognize that so many of the experience of our elders in the Black community has been “How do you get proximity to power?” I can imagine that for folks who have already been through so much turmoil in their lives, there are probably routes that are a lot easier.

Sueann: That’s really wise of you to recognize that, but, internally, how does that assist you with your activism or your thoughts and philosophies of moving forward?

Nikkita: It’s a constant reminder that no community is a monolith. Whether we’re talking about white communities or Black communities or the Asian diaspora or Native communities, there is disagreement around a lot of things – gender, age, class. Going back to Ericka Huggins, that conversation was very formative for me, because I asked her, “How do I interact with elders I disagree with?” And she said, “You know, I had elders I disagreed with. This is a tale as old as time and is not a new thing. But are you moving in a principled way? Are you moving transparently? Are you being accountable? Is it really coming from a place that is grounded in a bigger vision of community care and wellbeing? Then keep moving in that way. If you’re not causing harm and what is being built is actually transformative, that will come out in the long run.”

Discomfort As A Key To Growth: 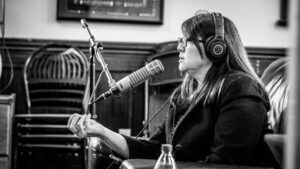 Sueann converses with Nikkita, gesturing with her hands as she talks.

Sueann: I almost wonder if it relates back to our desire to be comfortable and easy-thinking, right? Because it’s more comfortable just to avoid it than to actually step in and be vulnerable.

Nikkita: We have to all get comfortable being uncomfortable. We’re not going to get to a place of change or transformation if we only want to engage in things that make us comfortable. As a non-binary person, very little about, I don’t know, going to buy clothes feels comfortable. Who decided that because you have X genitals that you needed to do X thing or act X way? I spent a lot of my life very uncomfortable in my body and very uncomfortable with what I was told was the expectation for me as a “woman.” When I finally came to the understanding that is actually not who or what I am and chose to move honestly, I started to feel more free, but also other people felt more uncomfortable. So I just wanna invite folks: be comfortable being uncomfortable. Because people who move through the world without the privilege you have are uncomfortable, probably every minute of the day, but are actively choosing to be their liberated self. They make it possible for everyone else to live more honestly, even if that means we live more uncomfortably.

Sueann: There’s always that little moment, I feel, as we’re reeducating ourselves, to allow people to be who they are and human and identify with themselves, is the judgment. These interesting things we’ve created as symbolism for what you wear, right? That’s frustrating.

Nikkita: I actually think we need to stop trying to be able to look at people based on what they’re wearing or what we think they do and make determinations. No one wants to be prejudged, but we all complicitly participate in this whole judgment game. I think we do a disservice to each other when we do that. And because we seem to have this weird societal agreement about what these boxes are, people feel like they can’t break out of them. I really do believe artists, our trans community, folks who choose the pathway that actually feels best to them even if it’s maybe not the pathway their parents wanted for them, folks who break open boxes, really do set the stage for the rest of us to have opportunities to live in more liberated ways. I feel a certain sense of responsibility to keep pushing those boundaries. So that 10, 20, 30 years from now the generations that come, they can live in those more liberated spaces.

What Does Peace Mean to You? ‘Traverse Talks’ Episode 25 – With Peace Campaigner Kwabi Amoah-Forson