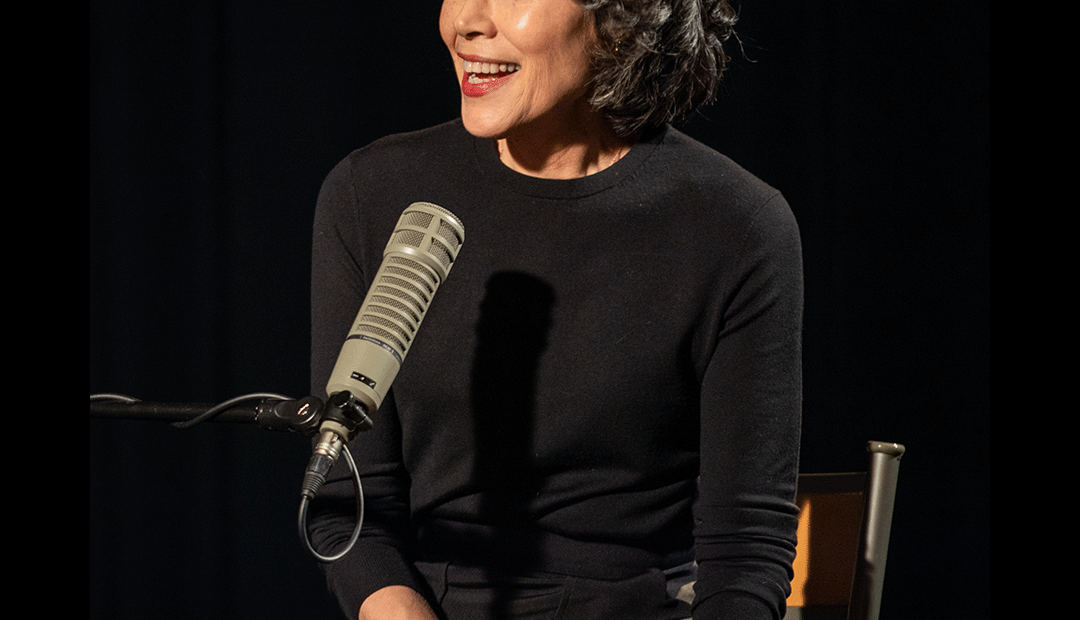 A former NBC anchor and renowned national and international correspondent, journalist Ann Curry was among the first to cover the war in Darfur, and many other humanitarian crises over the years. In this episode of Traverse Talks with Sueann Ramella, Ann talks about her journalistic ideology, how her relationship with her mother impacted her worldview from a young age, and how no one would be here without the support of the people in their lives along the way. And if anyone knows a Mrs. Hattie Converse, former English teacher at Ashland Senior High School in Oregon, let her know Ann’s looking to say thank you. Listen to her episode below or stream wherever you get your podcasts.

Traverse Talks With Sueann Ramella
What Does It Mean To Have Integrity As A Journalist? – With Journalist Ann Curry

To Lead Is To Serve:

Sueann Ramella: In Korean, I would call you eonni, older sister, and in Japanese it’s ane. Which is so similar to your name. You are literally the oldest, and your name is older sister, and you have been this role model for so many people. What has that been like for you? 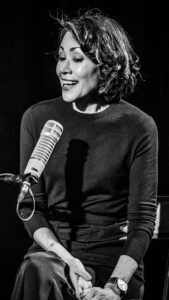 Ann, with her usual poised energy, answers a question for Sueann.

Ann Curry: Well, I think that you don’t think about trying to be someone’s role model. That’s almost a little too self-important, but I think what you can do is show people the possibilities in them by trying to do work that is valuable. My father used to say that you should do something that is of some service to someone else with your life, that if you could do that, then you would know at the end of your life, on your last day, as you breathe your last breath, that it mattered that you were born. You don’t always begin knowing what you’re supposed to do on the planet. But if you can start by doing something that is of some service, sometimes it can lead you there. Then there’s an earnestness in your work, right? There’s almost a kind of purity of motive in your work. And that is a thing that I think inspires others. It’s not really you so much, it’s that you are doing something, and people can see that earnestness. They can see that you’re flawed and you may not do it perfectly, but boy, you’re trying, you know, and they recognize that. I think we recognize this effort in each other.

Truth, Bias And The Philosophies Of The Non-philosopher:

Sueann: In a Variety interview, you said, “Journalists should just do their job. They should keep their head down and stay humble. This isn’t a job that makes you popular. Journalists have always been considered scum by politicians and presidents, even their own readers. I’m not a believer in both-side-isms. There are certain stories that have no other side.” So two things: what do you say to students to keep themselves humble when they’re doing this work? And two, I wanna talk about both-side-isms, and what you mean by that.

Sueann: It’s not the story, it’s you.

Ann: That’s right. And I think that really exists, you know? The self-focus is really too pervasive, especially in this “me, me, me” culture, and this kind of in-front-of-the-camera kind of journalism. You know, it’s not as if you do journalism – you don’t do it with an idea that you’re trying to create something. All you’re trying to do is have faith that if people know the truth, that they see the truth, that they’ll maybe care, and maybe they’ll do something about it. But your job is not to tell people what to do. Your job is not to affect policy, and create some kind of specific support for a particular law or politician, or any of that stuff. Your job is to tell the truth. That’s it, period.

Ann: In terms of both-sides-ism, you know, people rail against fairness – I do not. Fairness is a foundational principle of journalism, that you cannot get the truth unless you look at it fairly. And you don’t make it equal just so that it’s equal, because the truth is not always fair. So both-sides-ism to me is just laziness. It’s just, “I had to do it really fast, and I didn’t have enough time, and I just threw it out there ’cause I wanted to be equal.” That’s just lazy journalism. But do not attack fairness. That’s a different thing. And keeping truth as your North Star is not the same thing as both-side-ism.

Sueann: Oh, but Ann it’s so much work to be fair. 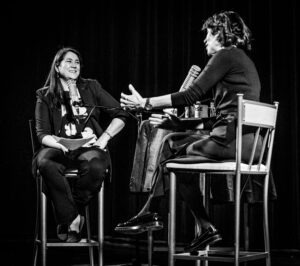 Ann’s storytelling skills are just as strong off-camera, as she makes Sueann smile with her recount.

Ann: Oh, come on. There was a man – I remember when I first became a journalist, a reporter in Oregon – this guy, this old newspaper guy named Spud, he was from Idaho, he said, “Hey.” We were all sitting around and he goes, “Hey Curry.” He says, “Let me tell you something. I’ll give you one piece of advice: don’t trust anybody.” I said, “Don’t trust anybody?” He goes, “Yeah, don’t trust anybody. Everybody wants to tell you the truth from their point of view, they all want you to tell the story they believe. Heck don’t even” – he actually didn’t say heck – “Heck, don’t even trust your mother.” I said, “Don’t trust my mother?” “Yeah, she’s even got an ax to grind.” And I thought about this, and I thought he’s right. “And PS,” he added, “Don’t even trust yourself.” See, that’s the part, that’s the part, it’s the excavating. How do you find the truth? Not that you’re gonna always find it. In fact, you probably won’t. But the effort, the practice to try to get closer and closer and closer to it, that’s what you’re going for, and getting as close as you can.

Ann: I don’t know if it’s taught as a philosophy, but I think the ideas about the struggle towards truth is foundationally immersed in philosophy. It is immersed in these ideas about what is truth. “Is there absolute truth or isn’t,” those are philosophical questions, and I can’t answer the philosophical questions. I’m not a philosopher. I can tell you there is absolute truth. If I pour this water out, I’m gonna get wet. That will happen. That is absolutely true. Some things are much less clear than that, clearly, but it’s in those shades of gray, and we just, it’s almost, it’s a practice, it’s an effort, it’s a being willing to fail but trying still.

Human Dignity And The Interconnectedness Of Us All:

Sueann: You have this perception of calm and empathy about you. When did this idea of dignity in others start to resonate with you?

Ann: I think it’s been a persistent lesson. I think I’ve seen it throughout my life. I’ve seen the beauty and the dignity in others. And certainly, you know, I think being the daughter of a mother who struggled as an immigrant in America against sometimes overt racism, and also her own insecurities about whether she belonged and her effort to become an American citizen. I could see there was a kind of this beauty, this effort, this deep wish that we all have to belong and to be accepted. And it’s in every one of us, whether we immigrated here or not. When I came to that kind of understanding, then I started to grow, it started to grow, it was like a seed. And then it grew and grew from there. And it certainly grew as I learned about history and it grew as I covered stories and could see, in some of the most difficult places, the generosity and the courage of people who are on their knees to lift others. I saw human dignity. 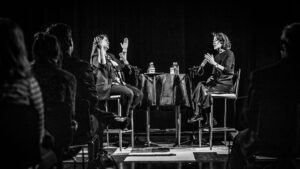 The interview with Ann was recorded in front of a live audience.

Sueann: So you did teach at American University. What are some of the important takeaways besides what you mentioned so far – seeking truth, North Star – that you would want journalism students of yours to know?

Sueann: Ann, can you just, because I think we need a refresher on what integrity is, tell me what it means to you?

Ann: What it means to me is to be someone who is accountable. If you make a mistake, you own it. To be someone who is independent, who’s not bought or focused on doing work because of some interest or some motivation. To have integrity means to understand that you are talking to people oftentimes about really difficult moments in their lives, sometimes not, but oftentimes, and that there’s an obligation not to hurt them. There’s an obligation to hear them, and there’s obligation not to exploit them, all these things. This is what integrity is. It is about being, trying to reach to be your better self, and constantly realizing that you’re not actually as good as you hope you would be, but you can keep trying to be better and better. 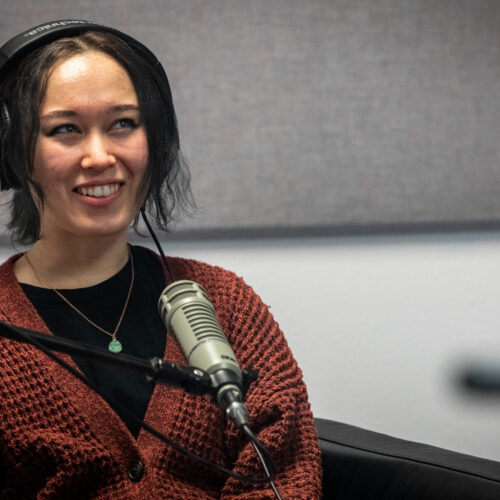 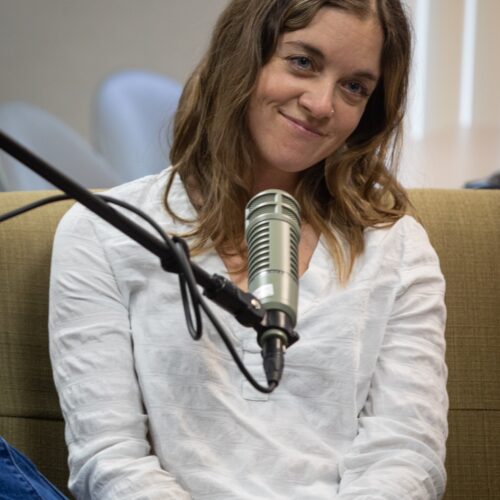