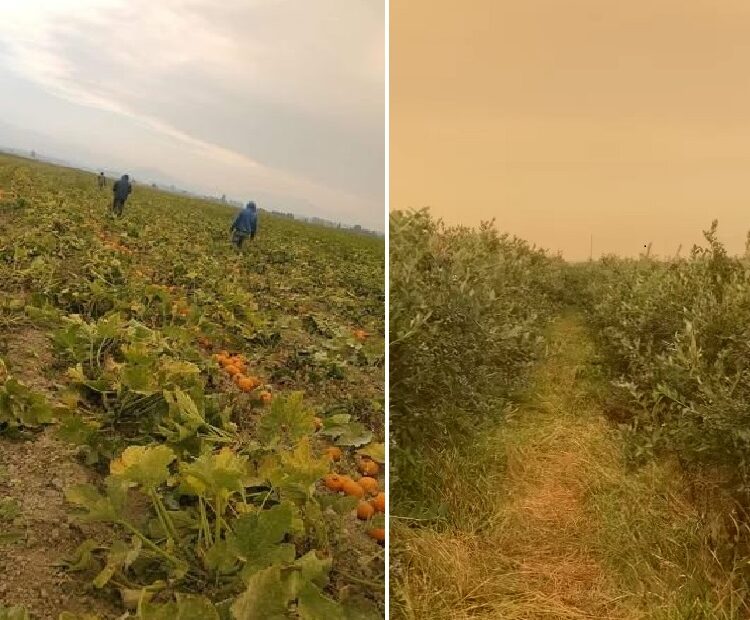 The emergency rules protecting outdoor workers from wildfire smoke in Washington expire on September 29th. Farmworkers keep calling for rules enforcement, but the Department of Labor and Industries says violations are uncommon.

“There was a lot of smoke here, we got an alert that everyone should stay indoors, that it was not safe to go out because the smoke is not good to be breathing. But workers were outside, and there were no masks. It was a bad day,“ says Juarez.

Juarez, a farmworker and organizer with Community to Community, was in Olympia weeks ago. Along with others, he asked Washington Governor Jay Inslee to declare a climate emergency. But the state has no plans to do it.

An email statement from the Governor’s Communication Office in response to an inquire from NWPB after the demonstrations in late August, says declaring a climate emergency was “not on the table”.

Still, farmworkers in Chelan and Okanogan say wildfire smoke impacts them greatly, according to Laura Rivera, Environmental Justice Coordinator with the nonprofit organization CAFE. The group provides services to vulnerable communities in Wenatchee.

“The only reason why they have masks this past three wildfire season was due to covid. They say their eyes were burning, their throats were itching, they were more congested. There was a person who had to go to the hospital because he had pneumonia,” says Rivera.

“I think it is 50/50. It depends on the company, whether they protect their workers,” says Delgado.

The Department of Labor and Industries Agricultural Regulatory Compliance Unit conducts inspections to ensure that employers follow the rules.

Yuker was unable to provide the number of infractions written but says they aim to step in when employers aren’t following the rules.

“The employer has to provide masks. If they don’t give it, they can contact us even anonymously. I’ll try to get somebody there that day to make sure that the workers have at least the protections that are that our rule requires,” says Yunker.

“Lowering the temperature, of paying for risky work. They don’t understand it is something that can be done in the real world. I don’t know if they are looking at the reality of how everything is changing and we can no longer continue as we are; otherwise, we are all going to leave, or everything is going to go away. If we don’t make some changes, there will be nothing left for anyone,” says Franks.

Even so, there is a lack of confidence in L&I inspections and Yunker acknowledges this.

“People say that we don’t respond and I can’t think in anything that we haven’t responded to that we’ve gotten from the field. It’s hard,” says Yunker.

While the emergency rules expire, Labor and Industries have been discussing permanent heat and wildfire protection rules that will apply in the state.