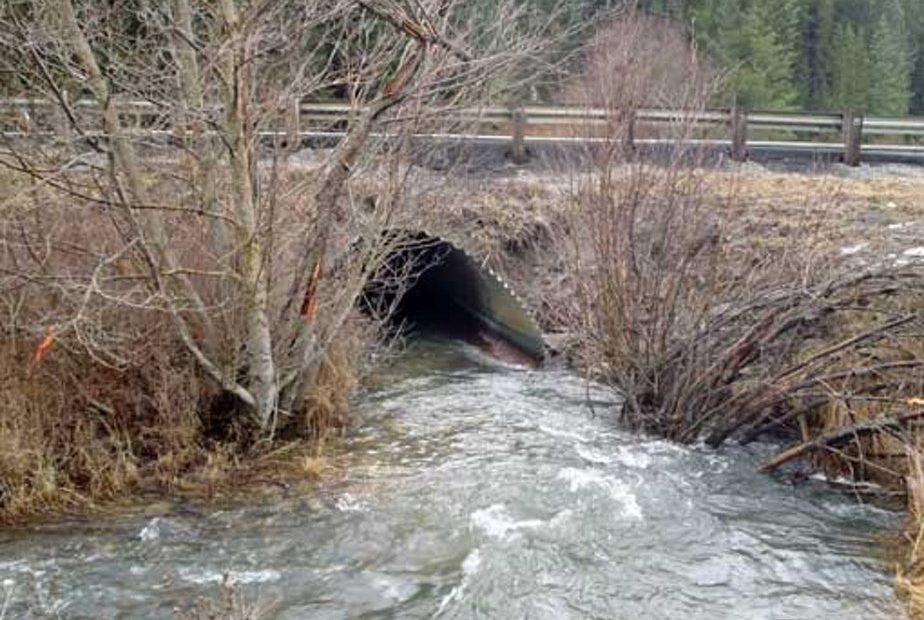 Swauk Creek runs through the dry dirt and the fir and pine trees of the Wenatchee-Okanogan National Forest. Right now, it’s no more than a few inches deep and perhaps five to six feet across.

Chinook, coho and steelhead used to migrate up the Columbia River, through the Yakima River, and into this creek. But, today, it has only a fraction of its historic fish runs. That’s in part because, when crews built Highway 97 across the state, they tried to straighten out the creek and force it through narrow pipes every time it crossed the road.

“The streams that we’re trying to restore are like a house that’s made just of hallways,” says Scott Nicolai, a habitat biologist with the Yakama Nation. “Imagine walking into a house and there are no bedrooms, no kitchens, no bathrooms. And that is what a lot of our streams look like today. They’re very straight—only one wet spot along the bottom of the floodplain.”

On Sunday night at 9 p.m., the Washington State Department of Transportation closed Blewett Pass for five days to replace those fish-blocking pipes with a fish-friendly concrete box. The construction will cost taxpayers $1.2 million, although that’s nowhere near the full cost of the project.

Washington state is on the hook for hundreds of projects like this, ever since, this spring, the Supreme Court let stand a lower court ruling mandating the removal of fish barriers throughout the state. Washington estimates the total cost of complying with the ruling will be more than $2 billion.

That’s why state transportation engineers are working with scientists to make Swauk Creek passable and habitable for fish again. Replacing the pipe is the first step.

“The current culvert is a six foot by nine foot corrugated metal pipe,” says Piper Petit, the transportation engineer in charge of the pipe replacement. “That sounds like a pretty big pipe when you think about it and think that you could probably stand in it, but, with the snow melt runoff, the velocity going through that culvert gets very fast, which would be a barrier to the fish.”

Petit says the pipe is also at a bad angle.

“When they installed it in the 50s, they put it perpendicular to the road,” she says. “That means that the creek has to turn a sharp 90 to get in and a sharp 90 to get out of it, so it’s been causing a lot of bank scour problems for us.”

This week, crews are ripping out the pipe and replacing it with a concrete box that’s 25 feet wide and 10 feet tall.

It will have enough space to put down a gravel bed so the creek can carve a natural path through the culvert in winter. In summer there will be pockets of slow shallow water where juvenile fish can rest.

“If you were looking at it from the perspective of a fish, you might not even know you’re inside of a box culvert apart from the fact that it’s shaded,” Petit says.

The box will also be at an angle, so the stream won’t have to turn so sharply to make it under the highway.

This project won’t end with the pipe replacement. Scientists are also putting logs into the creek to slow it down and get it to spread out across the floodplain. That will mean the entire creek will have more water in it at the end of the summer.

And, Nicolai says, the restored creek will give fish more than hallways.

“The bedrooms would be places where you’re storing gravel and fish are able to spawn,” he explains. As for kitchens, “different fish sizes and species rely on different environments for food. Small fish need very slow-moving water.”

Nicolai did work similar to this on a little stream that feeds into Swauk Creek, and, today, he’s showing off the results: a little pool that’s teeming with trout.

The first year after Nicolai put logs into this stream, a steelhead spawned right at this spot. 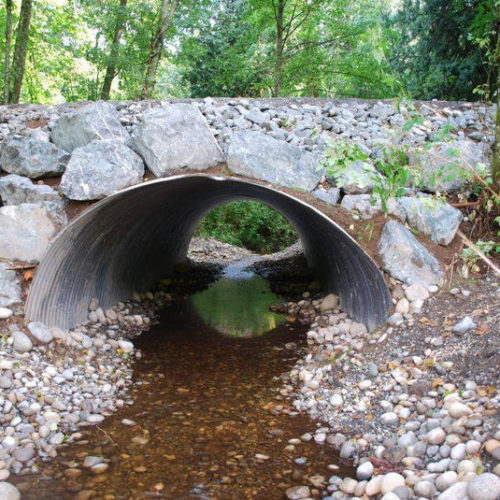 A tie in the U.S. Supreme Court may cost Washington state $2 billion. The court split 4-4 June 11 in a long-running court battle between tribes and the state over salmon-blocking road culverts. Continue Reading Supreme Court Gives Tribes A Victory Over Washington State In Salmon Case 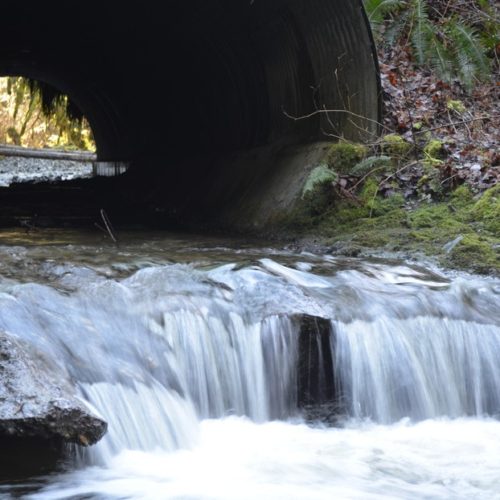 Seventeen years ago, 21 tribes sued Washington state to fix road culverts. On April 18, the U.S. Supreme Court is scheduled to take on the case. The question is whether state taxpayers should have to dish out billions to dig up roads so salmon can get through. The court’s decision will have repercussions for tribes all over the West. Continue Reading Fight Over Salmon-Killing Roads In Washington Now A Supreme Court Case About Native Rights