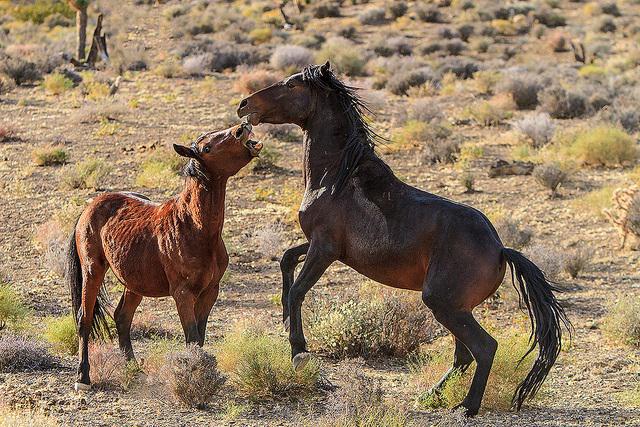 What to do about sexually active wild horses in Eastern Oregon is back up for debate.

The Bureau of Land Management re-published plans this week for an experimental study in permanent birth control for the horses, nearly identical to those stalled by a judge last year.

The court’s injunction came after the BLM gathered about 900 wild horses and burros near Burns, Oregon, in October. Groups organized around animal welfare mounted a legal challenge, prompting the agency to withdraw its decision to spay mares. This week, however, the BLM put out a nearly identical proposal “because of the consistent direction from both the National Wild Horse and Burro Advisory Board and Congress, recommending the use of sterilization to curb wild horse population growth,” according to the document.

Wildlife advocates responded in a Tuesday press release, saying they were “evaluating all legal options.”

“Severing the ovaries of conscious wild mares under non-sterile conditions in a bizarre attempt to quantify the risks and complications associated with this outdated procedure is beyond the pale. Our wild horses deserve better,” wrote Joanna Grossman of the Animal Welfare Institute.

One difference under the revised plan is that BLM veterinarians would not operate on mares who are already pregnant. Agency records show surgery would be cheaper and longer-lasting than hormonal methods. An existing vaccine wears off within a year or so.

The BLM is accepting public comments on the proposal until the end of the month.