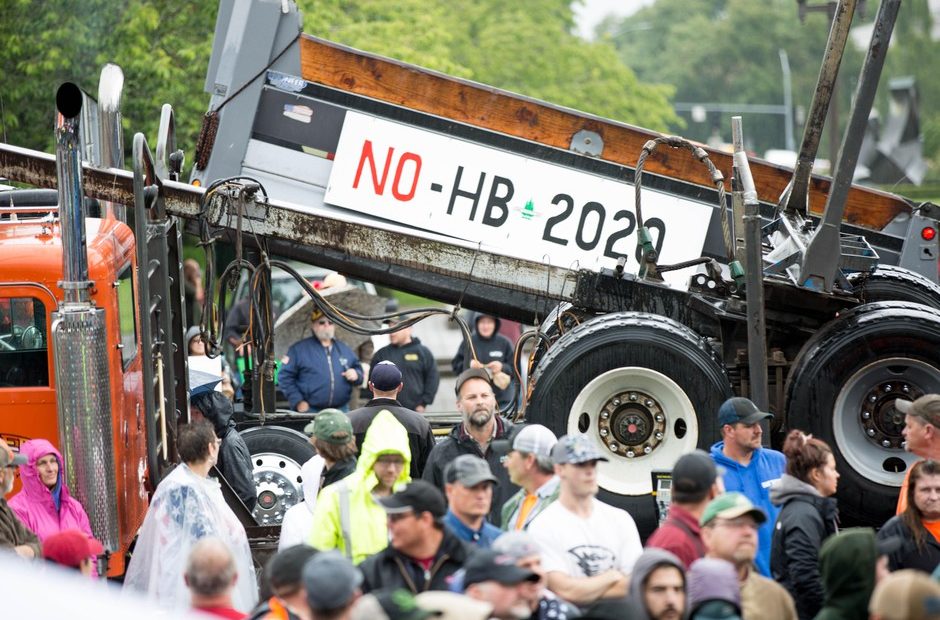 The days before the Oregon Legislature adjourns are typically chaotic affairs, with lawmakers rushing to pass bills in time to meet the constitutional deadline.

But on Thursday — just three days before this year’s deadline — Oregon lawmakers did not plan to take up a single bill. The House and Senate remained largely silent. Action at the Capitol was instead centered out front, where cheers from hundreds of demonstrators mixed with the constant blare of truck horns.

The so-called “Stay Strong Stay Gone” rally marked the latest backlash over bills seeking to reduce greenhouse gas emissions in Oregon. Loggers, truckers, farmers and their supporters had all come, they said, to urge 11 Senate Republicans who’ve been absent from the statehouse since last week to remain in hiding.

Democrats have said that House Bill 2020, a sweeping proposal for capping emissions and charging companies that pollute, is dead this session. But those who attended the rally were dubious.

“I don’t want the Republicans coming back because I’m afraid that crooked Kate Brown is trying to pull a fast one on us,” said 37-year-old Joe Poetter, a logger from Banks.

“I actually have family members who work inside with the senators, and I have been told that that’s just a ruse,” said Wendy Cunningham, of Brownsville, who stood in the rain with her four children. “They’re just saying that to get the senators to come back.”

The disbelief highlighted a tension that’s also occurring within the Senate. Though the chamber’s leaders have given assurances they will not seek to pass HB 2020 this year, Republicans have so far been unwilling to take them at their word. And while the ongoing boycott initially started as a way to block the bill’s passage, GOP senators have since floated other concessions they’d like to see. 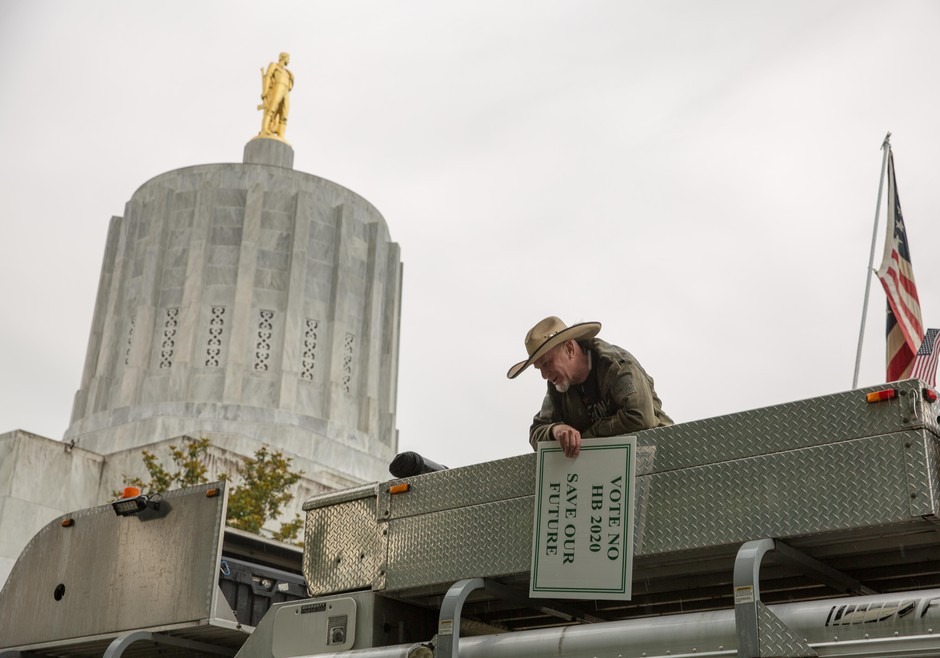 A man holding a sign in opposition to Oregon House Bill 2020 talks to fellow rallygoers from the roof of a truck at an event on the Oregon Capitol steps on June 27, 2019. CREDIT: Bryan M. Vance/OPB

The situation left lawmakers and Capitol staff uncertain Thursday. If Republicans returned, they planned to attend marathon floor sessions over the weekend as the Legislature hammered out remaining policy and budget bills. If Republicans held out until after adjournment at midnight on Sunday, they wondered when Gov. Kate Brown would call a special session, as she has vowed to do.

While Republicans said Wednesday that negotiations were making progress, their public statements gave no hint that a deal was imminent. In a release Thursday, Senate Minority Leader Herman Baertschiger Jr., R-Grants Pass, cheered the Capitol rally.

“The amount of support for the Senate Republicans is unprecedented,” the statement said. “The people have rallied in solidarity to have their voice heard at the Capitol. We encourage the press to go out and talk with the people.”

While those in Thursday’s crowd were united in their support for Republicans and dismay for the particulars of climate legislation, there was also clear confusion about some of the bills they’d come to oppose. In particular, loggers voiced strong fears about House Bill 2007, a bill aimed at addressing older diesel engines in the state.

Loggers with whom OPB spoke almost uniformly believed their machines would be outlawed under the bill, since it sets a phase-out period where the state will not issue titles or registrations for vehicles that have diesel engines of a certain age. But, as it stands currently, logging trucks and off-road vehicles are exempt from that regulation, and only owners who live in Clackamas, Multnomah and Washington counties are subject to regulation.

Cunningham, whose husband works for a Philomath logging company, cited HB 2007 as a central reason she’d traveled to the Capitol.

“This bill would absolutely impact and affect his livelihood in the most negative way,” Cunninghmam said. “It would put a lot of guys out of business because most of their equipment is really old.”

Loggers at the rally also voiced concerns about House Bill 2020, which is expected to raise fuel prices and would allow companies to offset their pollution by ensuring that some forested areas are not logged. A late amendment to the bill attempted to ensure that loggers and mills did not lose business due to those offset provisions, but the impact of that amendment’s language has been debated.

“They’ll end up selling carbon credits instead of a timber sale, which puts me out of work,” Poetter said. “If this bill goes through, our jobs are gone.”

The rally spurred heightened police presence in the Capitol, with state troopers patrolling every floor of the building. And with no Legislation being taken up, it tipped the statehouse’s typical aesthetic of drab businesswear toward fluorescent shirts and camouflage hats.

Rep. Shelly Boshart Davis, R-Albany, has a background in farming and trucking, and was a member of the committee that crafted HB 2020. After addressing demonstrators on Thursday, Boshart Davis acknowledged that there was some misinformation in the crowd. She attributed that up to an opaque legislative process, where changes to bills can be difficult to track.

House Bill 2007 “has definitely been a source of misinformation and truly the focus of these industries’ concern is definitely House Bill 2020,” Boshart Davis said. She said rising fuel and natural gas costs under the cap-and-trade program proposed by the bill would hurt the entire state.

“A lot of people talk about the rural-urban divide,” she said. “Definitely that is a concern, but really truly this is going to be costly for all Oregonians when you talk about energy prices going up.”

An analysis of the cap-and-trade proposal commissioned by the Legislature has suggested the bill could lead to an increase in jobs and the state’s gross domestic product.

Boshart Davis, a key opponent of HB 2020, said she wasn’t sure whether Democratic assurances to kill the bill were trustworthy. But she was noncommittal when asked if Republican senators should remain scarce until the session adjourns.

“I’m concerned about what a special session looks like, so all of that has to be weighed,” she said. “But them staying away has made this possible.” 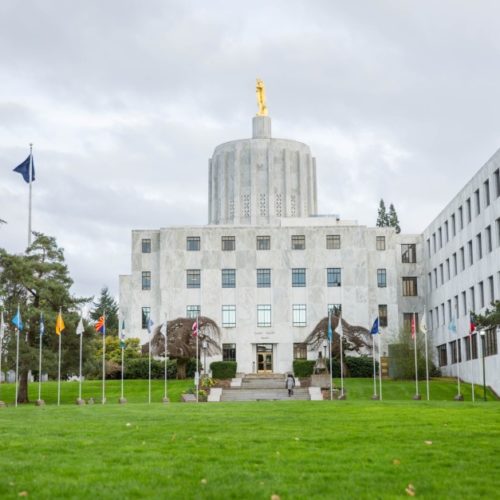 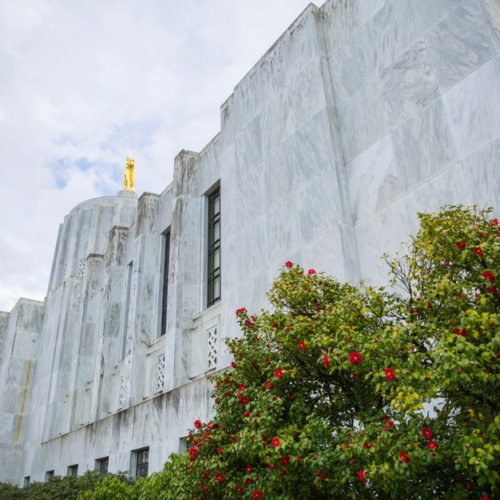 Oregon Senate Republicans Have Literally Left The Building. How Do They Come Back?

In Oregon, GOP senators, solidly in the minority, left the Capitol this week before lawmakers could approve House Bill 3427, which would inject schools with billions in new funding to lower class sizes and boost graduation rates. The move denied Democrats a 20-member quorum, halting business in the Senate. Continue Reading Oregon Senate Republicans Have Literally Left The Building. How Do They Come Back?