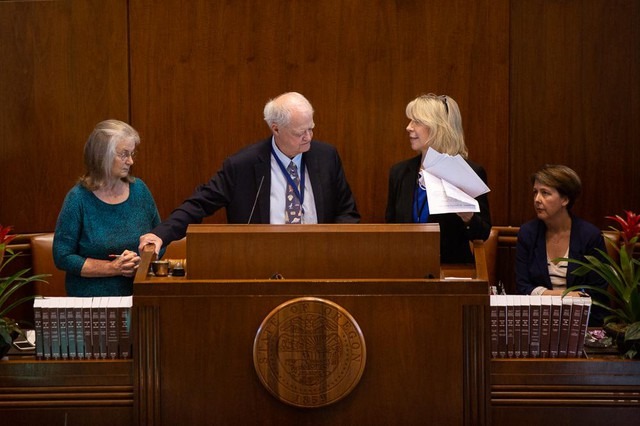 Oregon lawmakers concluded their work for the year Sunday, marking the close of the most remarkable and contentious legislative sessions in modern memory.

In a day filled with flaring tempers and frequent confusion, lawmakers in the House and Senate passed a completed state budget and a raft of policy bills just after 5:20 p.m., well before the midnight deadline set forth in the constitution.

Among the bills headed to Gov. Kate Brown are a proposal to create a paid family medical leave insurance program in Oregon, a law allowing duplexes in lots zoned for single-family homes, and ballot referrals that will ask voters to place a cap on campaign contributions and hike tobacco taxes.

Those were just a few of well over 100 bills — many of them high-profile goals for Democrats — lawmakers rushed through in the final two days.

As the Senate president and House speaker gaveled out the session nearly in unison, lawmakers erupted in cheers. The doors were thrown open in both chambers, and lawmakers waved at each other from across the expanse of the rotunda. In the Senate, staffers tossed stacks of paper in the air in celebration.

But before that revelry, tensions dominated much of Sunday — particularly in the Senate, where lawmakers are still harboring resentment over a nine-day boycott by Republicans.

Controversy over comments Sen. Brian Boquist, R-Dallas, made about state police ahead of that walkout continued to roil the chamber Sunday, with several Democrats requesting that he stay off the Senate floor. 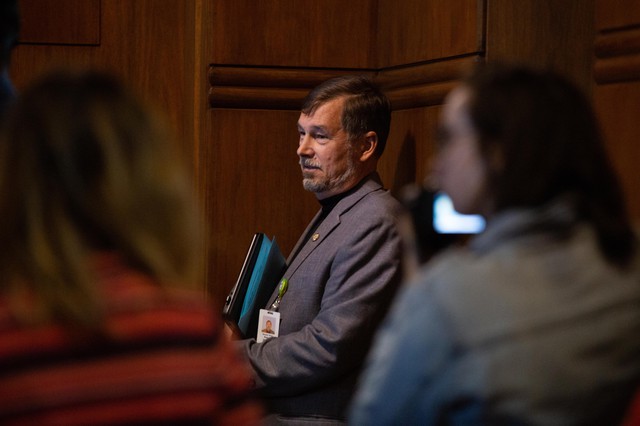 Oregon Sen. Brian Boquist, R-Dallas, waits to enter the floor of the Senate on the last day of the 2019 legislative session. Sen. Boquist said that no one should have cause to worry about their safety, after his remarks that state police should “send bachelors and come heavily armed” if they tried to apprehend him during the GOP walkout the previous week. CREDIT: KAYLEE DOMZALSKI/OPB

Boquist, who’d complied with a similar request on Saturday, insisted on attending. He said his remarks just before the Republican walkout — that police should “send bachelors and come heavily armed” if they tried to arrest him — were not an indication he posed a threat.

“If people are worried, they shouldn’t be,” he said Sunday morning. “That’s why we have state police here. They do a fine job.”

Sen. Sara Gelser, D-Corvalis, who has raised the strongest objections to Boquist’s comments, refused to attend a floor session because of his presence. She pointed out that a private attorney retained by the Legislature recently recommended Boquist be kept out of the Capitol until the matter had been resolved.

“What I was told is, ‘If you feel unsafe or if you feel uncomfortable, you can leave,’” Gelser said.

Her absence nearly wound up killing the most high-profile housing bill lawmakers took up this session. House Bill 2001 would allow duplexes and other multifamily buildings on parcels currently zoned for single-family homes in cities of at least 10,000 people, essentially pushing greater density in some residential neighborhoods as a way to address the state housing crisis.

The bill has some support and opposition in both parties, and with Gelser gone it fell one vote shy of the 16 votes required to pass. Lawmakers called the bill back in the afternoon.

By that point, Boquist had left the building — along with Senate Minority Leader Herman Baertschiger Jr., R-Grants Pass — and Gelser returned to the floor. A number of lawmakers also changed their votes on HB 2001, allowing it to pass 17-9.

As they did Saturday, lawmakers took up bills at a fast clip, passing them with little to no discussion. That included some of the session’s signature proposals.

House Bill 2007, a bill that would phase out older diesel engines in the Portland metro region, passed the Senate in a 16-11 vote. House Bill 2005, which will pay workers for up to 12 weeks while they are sick or caring for family members, passed by the same margin. And senators approved a bill that would require nonprofit organizations that donate large amounts to political campaigns to disclose their top donors.

Things were smoother on the House side, which was able to carry out regular business while the Senate was shut down by the Republican walkout. Representatives passed Senate Joint Resolution 18, which will ask voters whether the state constitution should be changed to allow campaign finance limits. Oregon is one of a handful of states that places no cap to the amount donated to political campaigns.

Despite tensions, the last-minute flurry of bills left Democrats having accomplished many of their priorities for the session — including a new $1 billion business tax for schools, bills to bolster the housing supply and add renter protections in the state, and funding for Medicaid. A fourth top goal, passing a bill to slash greenhouse gas emissions by capping them and charging polluters, fell apart in the session’s final days because of the Republican walkout and, in the end, a lack of Democratic votes.

A key provision for funding health care nearly died Sunday, when Senate Republicans refused to suspend the rules to allow a vote on House Bill 2270. The bill, a priority for Gov. Kate Brown, places a measure on the November 2020 asking voters to hike tobacco taxes in the state.

For some reason, Republicans wound up relenting. When Democrats took a second stab at suspending the rules to vote on HB 2270, the motion got the bear minimum 20 votes to pass.

Senate President Peter Courtney, D-Salem, said after the session closed he was unclear why Republicans had allowed the bill to proceed.

“I really don’t quite know what happened in that caucus to make them make a move,” he said. “They came out and they gave us the green light.”

The sharp contrasts of the session left Democrats conflicted once it was over. Asked to assess the session, Courtney bemoaned the frayed relationships and a lack of process that characterized its final days.

But he added: “If you look at it in terms of public policy, it’s extraordinary. I still don’t know everything we did. I thought we were overreaching before we started. I think we did.”

“It was a difficult session,” she said. “There were many dynamic going on this session. Some of them were new to us — particularly the walkout. But if you look at the actual accomplishments it was pretty stunning.”

On the House side, which was much smoother down the session’s final stretch, House Speaker Tina Kotek focused on Democratic accomplishments.

“I think this has been an incredibly successful session,” she said. “We managed to have almost complete success on our top priorities.”