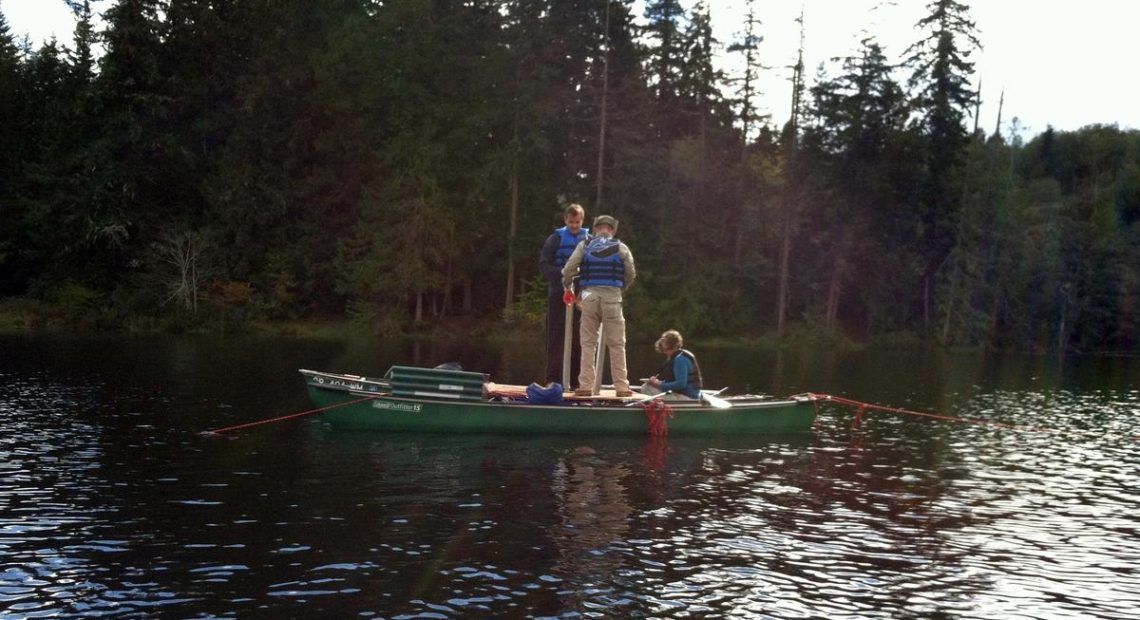 Multiple teams of earthquake researchers are looking in what may seem like an unlikely place to figure out how strongly the Pacific Northwest shook during great quakes in the past.

They’re poking around the bottom of lakes in Western Washington and Oregon. It turns out lakes preserve a nifty earthquake record that can shed light on the next “Really Big One.”

“The lake records are the missing link,” said Oregon State University marine geologist Chris Goldfinger. “We don’t know very well how hard it is going to shake as you move inland. We have models, which are great, but we don’t have very much direct evidence.”

Goldfinger leads one of four separate teams of geologists that are probing different Northwest lakes for traces of ancient earthquakes or tsunamis. He said a key goal of his lake investigations is to “ground truth” computer models of the potential shaking under the region’s major cities, which are more than 100 miles east of the dangerous offshore Cascadia fault zone. 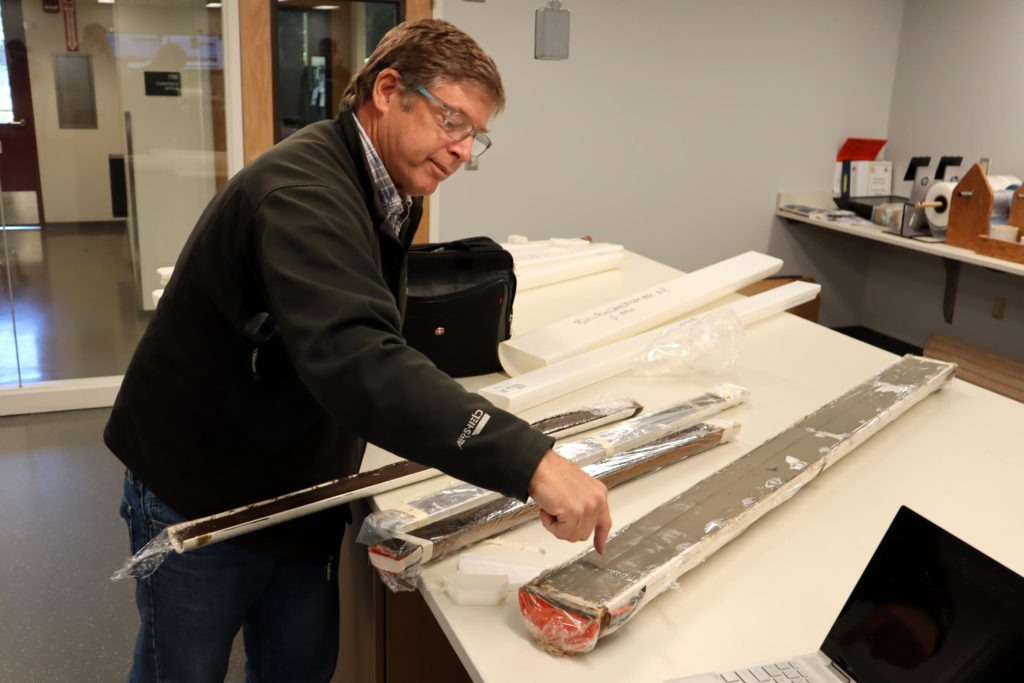 “A good way to test that simply is to do a transect of lakes across the land and go east away from the fault far enough until the signal goes away,” Goldfinger explained. “That mostly worked.”

The existence or absence of underwater landslides allows geologists to extrapolate “how hard did it actually shake” in past great earthquakes at specific distances from the epicenter. Goldfinger’s preliminary assessment is that the current U.S. Geological Survey seismic hazard maps capture the earthquake risk pretty well for the Northwest’s population centers.

Over the past five years, Goldfinger and a cadre of students and technicians deployed sonar to map a selection of lake basins and extracted cores from the lake bottoms. The best results came from Leland Lake, northwest of Seattle in Jefferson County, from Lake Sawyer, southeast of Seattle near Black Diamond, and from Bull Run Lake in the foothills of Mount Hood east of Portland.

Evidence of ancient earthquakes is recorded in thin, almost invisible, stripes in the tubes of chocolate-colored mud pulled from the lake floors.

“If you shake the whole lake basin, a lot of sediment along the shoreline will fail and just run to the bottom of the basin and leave what is called a turbidite, which is just a submarine landslide deposit,” Goldfinger said in an interview at OSU’s vast geologic core repository. “It can also fail just by having the very top (layer of) fluff sediment fail — just a few centimeters of sediment — which still leaves a deposit that you can find.”

The events that leave a stripe can be carbon dated. When the same date shows up in lake after lake over a wide area, he infers the cause was most likely a major earthquake or volcanic eruption. Analysis of the lake sediments yielded a geologic record of 16-25 earthquakes going back as far as 10,000 years. Some of the hand-pushed cores were stopped by a concrete-like layer of ash left behind by the cataclysmic eruption of Mount Mazama, which created Oregon’s Crater Lake, about 7,600 years ago.

When Goldfinger studied the sidewalls of these lakes to estimate how much shaking it took to unleash underwater landslides, his team found the strength of shaking diminished considerably with distance from the offshore Cascadia fault. This could be reassuring for people in the Interstate 5 corridor worried about the next Big One.

“It is going to shake very gently,” Goldfinger predicted. “People will be standing there talking about it going, ‘Should we do something? Is this a big earthquake or just a little one?'”

But Goldfinger isn’t about to give the inland cities of the Northwest a pass on earthquake preparation.

“The thing about the Big One is that it will go on for minutes and minutes and minutes, which are an eternity when you’re in it,” he said. “The fragile infrastructure that we have — the unreinforced masonry buildings, the pipelines built in the 1930s, all these sorts of things — really can’t handle even light shaking for less than one minute, let alone four or five minutes. That’s the thing.”

As for the other research teams, one is from the U.S. Geological Survey’s Santa Cruz office. It is focused on Floras Lake, Oregon, and Lake Ozette, Washington. Those lakes are so close to the coast, they can show how often Cascadia earthquakes trigger tsunamis. A tsunami leaves behind a layer of beach sand in the lake sediments. 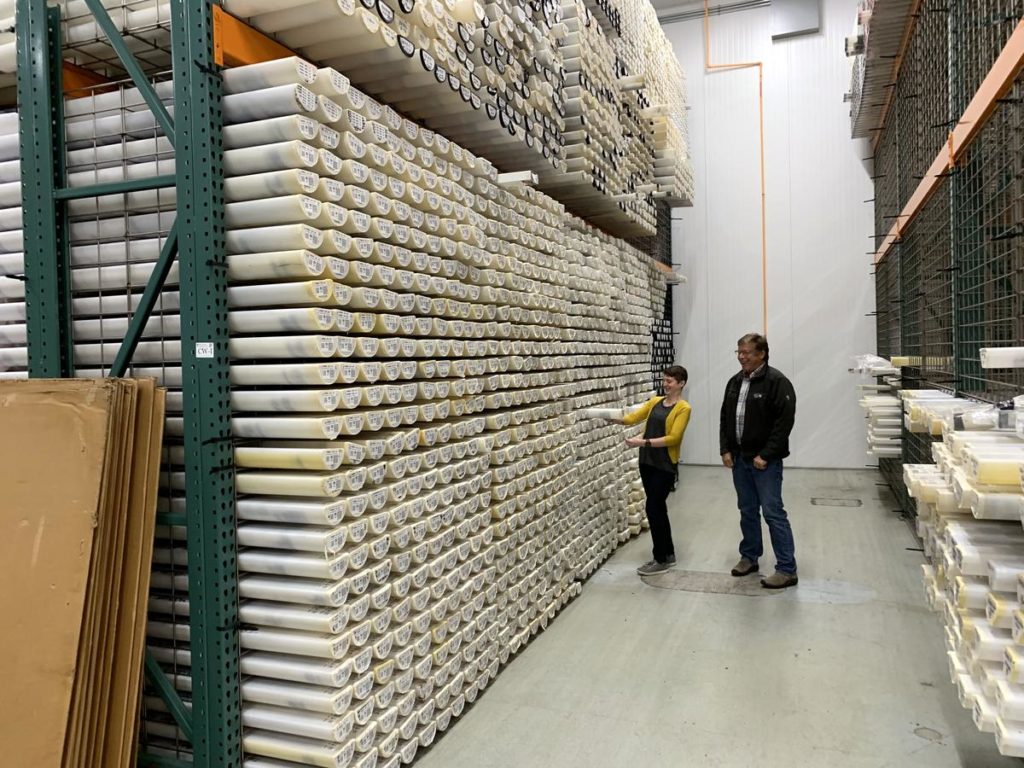 A different team led by University of Oregon geologist Joshua Roering is scouring lakes in the Oregon Coast Range. The premise here is that great earthquakes should trigger landslides. Landslides could block streams and drown forests — or dump trees into a lake. Close examination of the tree rings in those so-called “ghost forests” can tell you exactly when the trees died. Then you construct a chronology for ancient catastrophes that you can project forward.

Yet another set of researchers is targeting underwater “ghost forests” in the Puget Sound region. USGS regional earthquake hazards project chief Brian Sherrod is hopeful that evidence found in lakes can help him figure out how often and how hard the ground shakes from earthquakes spawned from widespread shallow, crustal faults on land, such as the Seattle Fault, Tacoma Fault and the Southern Whidbey Island Fault.

“We have a whole bunch of those in the Puget Lowlands,” Sherrod told public radio. “Any of those could produce fairly significant earthquakes and could be quite damaging to the urban area.”

University of Arizona Professor Bryan Black is helping Sherrod collect wood wedges from ghost forests in lakes on many sides of Puget Sound — including Price Lake, Mill Pond and Catfish Lake — as well as some nearby saltwater inlets.

Black said the wood samples he has analyzed so far are well preserved. He is keen to find if there is a connection to the last full rip on the Cascadia fault, which happened in the year 1700. Another high priority is to determine the extent of strong shaking from the last rupture of the shallow Seattle fault, approximately 1,100 years ago.

Black said the Seattle fault quake triggered landslides that sent forests into nearby Lake Sammamish and Lake Washington. He said a lot of sunken wood in tidewater inlets down by Olympia can be radiocarbon dated to around 1,100 years ago too, which suggests the Seattle quake might be connected to a more massive event that touched a wider area.

“We’re trying to get an exact calendar year for the Seattle quake and figure out if it was coincident with events to the south,” Black told public radio in an interview Wednesday. “Was it one really big quake that involved many faults at once or maybe these faults ruptured separately all within a few years of each other — or possibly decades apart. If it was at all at once, that would have implications for the worst case from crustal earthquakes.”