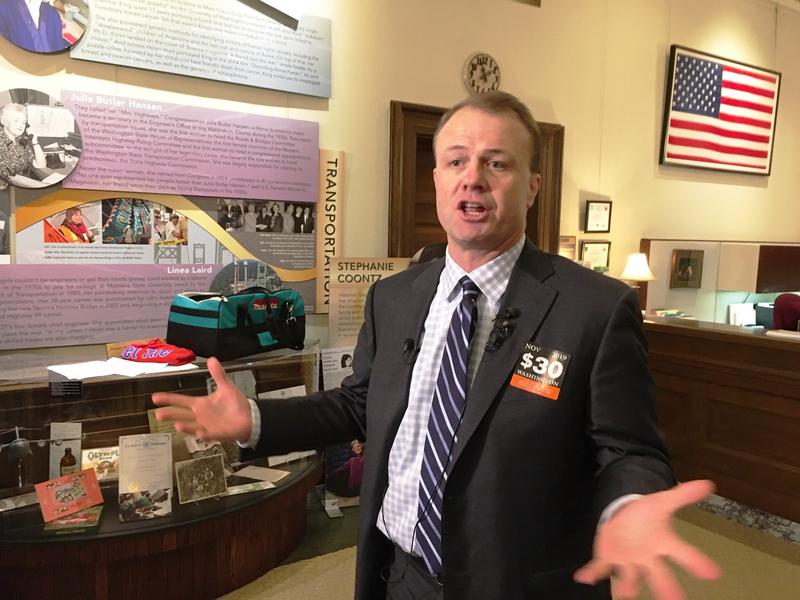 A Thurston County judge has found that anti-tax activist and Republican candidate for governor Tim Eyman concealed more than $700,000 in campaign contributions related to his initiative work over a six-year period.

The finding comes as Eyman mounts a first-ever run for public office and faces trial this summer over an alleged campaign finance kick-back scheme.

In his order Friday — granting the state partial summary judgment in an ongoing lawsuit — Thurston County Superior Court Judge James Dixon found that Eyman failed to report $766,447 in contributions between 2012 and 2018.

“Mr. Eyman solicits contributions to compensate himself for promoting anti-tax ballot propositions,” the order said. “The Court finds this undisputed fact establishes that Defendant Eyman has an expectation of receiving funds toward electoral goals, which requires reporting under the Fair Campaign Practices Act.”

As a result, the order said, Eyman had an obligation to register himself as a political committee. Because he didn’t, over the six-year period, the court found that Eyman missed more than 100 Public Disclosure Commission reporting deadlines and that his reports are overdue by a cumulative 173,862 days.

“We respectfully disagree with the judge’s ruling believing it was contrary to the facts, the law and the Constitution,” Sanders said.

Sanders said the money Eyman received was money he used to support his family in the face of litigation by the Attorney General’s office. “[N]one of this money was solicited or used to support any election campaign,” Sanders wrote.

In July, Eyman is scheduled to face trial in a campaign finance lawsuit that alleges in 2012 he concealed more than $300,000 in kickback money from a signature gathering firm. As that case has headed towards trial, Eyman has been held in contempt of court and accrued more than $317,000 in fines for failing to turn over relevant documents related to the case.

According to the Attorney General’s office, Eyman faces “significant potential penalties” for the violations identified in the judge’s order issued Friday. Those penalties will be determined after the July trial.

Last November, following passage of I-976, his latest car tabs reduction measure, Eyman announced a run for governor. Initially he said he would campaign as an independent, but last week he said he’ll run as a Republican.

A Presidential Year Without A Statewide Ballot Initiative: A First Since 1928 In Washington

A review of Washington’s initiative history reveals that not since 1928 has the November ballot been bereft of an initiative to the people in a year when voters were electing a president. Continue Reading A Presidential Year Without A Statewide Ballot Initiative: A First Since 1928 In Washington