As a psychiatric social worker at Washington’s Western State Hospital, Maria Claudio’s job is to care for some of the most complex mental health patients in the state.

But these days when she gets home, she has a second job waiting for her: making homemade masks for her colleagues who are on the front lines of the COVID-19 pandemic.

To date, 22 Western State Hospital (WSH) staff have tested positive for the virus. That number has more than quadrupled in two weeks. In addition, six patients have tested positive and one elderly patient has died. Claudio said with each additional positive case, her fear rises.

“We could all potentially already be exposed, but not showing symptoms so the level of anxiety is high,” Claudio said.

Until recently, employees at WSH were not allowed to bring their own masks from home. But that changed last week after the Washington Federation of State Employees (WFSE), a union representing more than 2,000 workers at the hospital, raised the issue with Department of Social and Health Services (DSHS) management.

“There is absolutely no justifiable reason to prevent staff from wearing their own/homemade masks to protect their co-workers from unknown exposure,” the union wrote in an email.

Last Tuesday, DSHS changed its policy. In a memo to staff, the agency said masks from home would be allowed to “reduce risk” and “reduce concerns.” The new policy also applies to staff at Eastern State Hospital (ESH) and at the state’s Residential Habilitation Centers for the developmentally disabled.

But with permission came a warning.

“Please be advised that if you choose to wear your own face mask, you will be doing so at your own risk,” wrote Sean Murphy, the assistant secretary for behavioral health at DSHS.

The reversal of policy came amidst changing state and federal guidance on personal masks, a persistent shortage of personal protective equipment (PPE) and a steady increase in the number of employees testing positive for COVID-19 at Western State Hospital.

“There’s been some mixed messages around wearing personal masks, that guidance has evolved,” Murphy said in an interview. “We’ve definitely had a change in practice along the way, we’re learning with all the rest of the world in how to handle this virus.”

DSHS’s policy of allowing staff to bring masks from home contrasts with a recent announcement from the Washington Department of Corrections (DOC) that it will start issuing expired N95 masks to front line staff in the state’s 12 prisons, 12 work release centers and those who work in community supervision. So far, 10 DOC staff and two incarcerated individuals have tested positive for COVID-19. The first of those inmates was already hospitalized in the community for an unrelated medical issue. 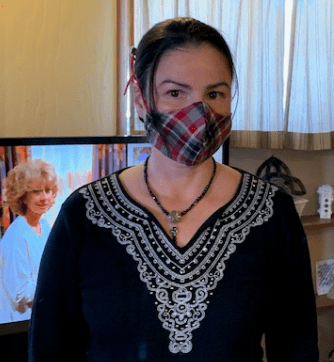 Psychiatric social worker Maria Claudio shows off one of the homemade masks she’s made for herself and co-workers at Western State Hospital. Courtesy of Maria Claudio

Murphy said he couldn’t comment on DOC’s approach, but that his agency is following state Department of Health (DOH) guidance and reserving medical masks for staff assigned to care for patients with flu-like symptoms and those who have tested positive for COVID-19.

“We don’t have enough supplies to issue masks out to all of our staff and maintain that issuance level for a long period of time, so part of this is a conservation effort,” Murphy said.

The battle over the masks is just one indication of ongoing tensions between front line staff and management at WSH, a sprawling 857-bed facility with more than 2,600 employees in Lakewood.

SEIU 1199 said it has sent 50 communications and demanded more than 10 bargaining sessions, of which, the union said, there have been two.

An SEIU 1199 spokesperson said some of the union’s demands have already been met, but others have not, including a request for paid administrative leave, in lieu of sick leave, for workers who contract COVID-19. The union has also asked that all patients at the hospital be tested for the virus.

“Our overall assessment is that decisions made related to COVID-19 at Western State have been reactionary, not evidence-based and do not account for long-term impacts,” Amy Clark, the spokesperson, wrote in an email.

In almost daily communications with the state, WFSE said it has made similar demands of DSHS and hospital officials and has also requested formal bargaining “due to ongoing safety issues.”

In response, DSHS said that it’s continually evolving its response to the crisis as public health guidance changes.

For example, on March 29, the hospital created a separate ward for patients who test positive for COVID-19 — something the unions had requested.

Last week, following a request to DSHS from SEIU, a team from DOH that included the state’s epidemiologist for communicable diseases toured the hospital and made a series of recommendations.

In response, this week DSHS announced that all staff assigned to ward S-8 where several of the COVID-19 cases have been detected will be tested for the virus.

However, that falls short of what the unions wanted. In a March 31 email, WFSE Executive Director Leanne Kunze requested testing for all staff and patients “who have been in any ward in the South Hall.”

In addition to the challenge of keeping COVID-19 from spreading, WSH is dealing with an ongoing staffing shortage that has been exacerbated by the public health crisis.

With strict screening in place to keep sick employees out, Murphy said more employees are taking sick leave. Also, some front line staff who are especially vulnerable to COVID-19 have been reassigned to work from home or in lower-risk settings. SEIU 1199 confirmed Tuesday that 100 of its nurses who are high-risk have been granted telework for two weeks.

The staffing shortage, in turn, has made it difficult to restrict the movement of staff between wards, which the unions have flagged as an additional health risk.

In an effort to address that problem, Murphy said that this week nurse supervisors were redeployed to work on the floors.

There have also been unforeseen complications.

For instance, last month WSH started screening employees for symptoms of COVID-19 when they arrived for work. Initially, that screening process was delayed while the hospital awaited a shipment of thermometers. But once the thermometers arrived, another problem arose. As staff came in from outdoors to be screened, Murphy said the thermometers were not taking accurate readings.

Murphy said the hospital has now ordered a different kind of thermometer, but because they’re in short supply delivery isn’t imminent. In the meantime, WSH has stopped taking the temperatures of staff. Instead, workers arriving for their shift now sign an attestation that says they don’t have COVID-19 symptoms.

“It’s not a far stretch to ask health care workers to monitor themselves for symptoms, make sure that they’re ensuring that they don’t have a temperature prior to coming to work,” Murphy said, noting that attestation is used in other healthcare settings.

But WFSE’s executive director, in her March 31 email, said the attestation process had created misunderstanding among staff and wrote that it “feels more like a mitigation of liability.”

The strongly worded email also alleged a lack of coordination and communication “bordering on negligence” and urged WSH to seek outside help.

“We do not have the luxury of time to pretend it’s going to be okay at WSH (and other locations) when it clearly is not,” the email said.

In response, Murphy said his agency is in daily contact with the unions and that suggestions that come from the unions or from employees are reviewed and considered. He also acknowledged the challenge of battling a fast-moving virus when someone can be asymptomatic and still be contagious.

“It makes it very difficult to keep it from coming in to the institution,” Murphy said, adding that they’re monitoring the situation closely.

Another prong of the fight to keep COVID-19 in check at WSH involves reducing the census. The facility is in the process of trying to rapidly find community placements for up to 60 civil or non-criminal patients who are ready to discharge. The Associated Press was the first to report on this effort.

Murphy said the hospital is also limiting new admissions and sending some patients who would ordinarily go to WSH to ESH instead.

Several advocacy groups want the state to go much further and employ “non-traditional” methods to release even more patients. Last Friday, Disability Rights Washington, the ACLU of Washington, Columbia Legal Services and other organizations sent a letter to DSHS Secretary Cheryl Strange requesting that she act immediately to reduce the populations at WSH and ESH – noting that both facilities are near capacity and patients often share rooms.

While applauding the agency’s efforts to keep patients and staff safe, the letter called for the temporary release of some civil patients, the release of other civil patients to what’s known as a Less Restrictive Alternative in the community and the furlough of some forensic patients who have been found not guilty by reason of insanity, if they’ve already been granted conditional release status.

“We are requesting that DSHS be aggressive and creative in reducing the patient population at WSH and ESH, but we are not advocating release to homelessness or otherwise dangerous situations,” the letter said.

The COVID-19 pandemic is just the latest crisis to buffet the state’s largest psychiatric hospital. In 2018, WSH lost its federal accreditation, and with it $53 million in funding, after a turnaround effort fell short. The hospital has also struggled to serve civil patients while also meeting a court-ordered requirement to provide competency evaluation and restoration services to individuals in jail.

Gov. Jay Inslee and lawmakers have now committed to a multiyear effort to move most civil patients out of the aging hospital and into new community-based facilities, while turning WSH into what Inslee calls a “forensic center of excellence.”

But for now the crisis at hand is overshadowing those long-term goals, which are part of a broader effort