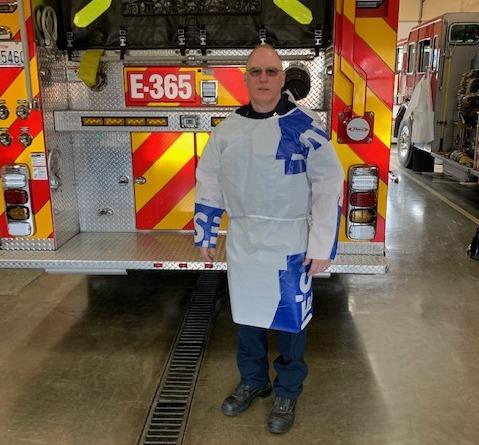 Protective surgical gowns are one of the most scarce and eagerly sought items in the current coronavirus pandemic. Responders-turned-MacGyvers in at least three separate places, including two in Washington state, have independently hit upon a do-it-yourself alternative using common construction house wrap.

Washington state’s COVID-19 emergency management center has 10 million gowns on backorder for distribution to first responders, hospitals, long-term care centers and health clinics. But with the resupply date unknown for agencies burning through their current stockpiles of personal protective equipment (PPE), backup plans are needed. Gowns protect the wearer from spatter or contamination.

The Chelan-Douglas Health District in Wenatchee tweeted out a fabric pattern for a medical gown on Thursday with a call to citizens to sew to “help protect those working on the frontlines of COVID-19 response.”

“There is currently a critical need for homemade gowns,” the instructions said. “The donations of homemade masks has been great, however, the priority now is to obtain homemade gowns.”

In Federal Way, Washington, South King Fire & Rescue leaders were watching their supply dwindle, when one of them remembered once seeing Tyvek used as a poncho.

Nielsen shared his idea with fellow firefighter Jim Wilson, the in-house sewing expert, who created a prototype Tyvek gown. Wilson has since moved into regular production as time permits using a sewing machine set up next to his assigned fire engine. He cuts up rolls of vapor barrier house wrap donated by a local Lowe’s home improvement store. 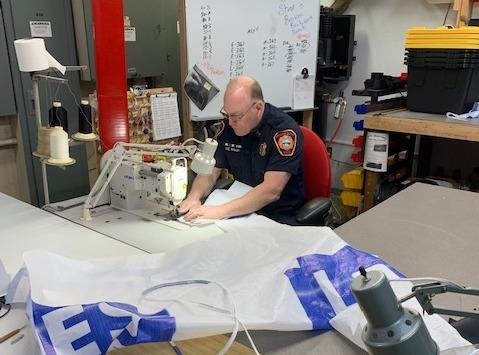 As word spread about the alternative gown, the South King Fire & Rescue department filmed a how-to video to answer the growing requests for instructions for crafting with moisture barrier material that is stiffer and noisier than the synthetic fabric used in medical-grade surgical gowns.

“I hope this works out for everybody. It’s working out for us,” said Wilson after stitching together a complete Tyvek gown in around ten minutes on the freshly-posted video.

Meanwhile on the Olympic Peninsula, a former state representative who remains active on emergency preparedness issues independently stumbled upon the same idea. Jim Buck noticed a roll of Tyvek laying around from a house project years ago and his mind made the connection to the shortage of PPE.

“We know it isn’t the optimal solution, but it will work,” Buck said by telephone from his home near Joyce, Washington.

Buck started emailing with the Washington State Emergency Management director and state Department of Labor and Industries to promote the Tyvek gown and see if it could be OK’d for use as stop-gap protection in non-sterile, non-surgical settings.

Volunteers overseen by Clallam County Emergency Management are already sewing gowns with donated cotton fabric and could potentially branch out into Tyvek gowns, Buck said. Given the virus-induced slowdown in construction, house wrap material is in ample supply.

Buck learned the U.S. Food and Drug Administration and federal Centers for Disease Control agree the shortage of medically-certified gowns creates a need to improvise.

“FDA recognizes that when alternatives, such as FDA-cleared gowns, other surgical apparel, and/or gloves, are unavailable, individuals, including healthcare professionals, might improvise personal protective equipment,” a guidance letter published in March said. “FDA does not intend to object to individuals’ distribution and