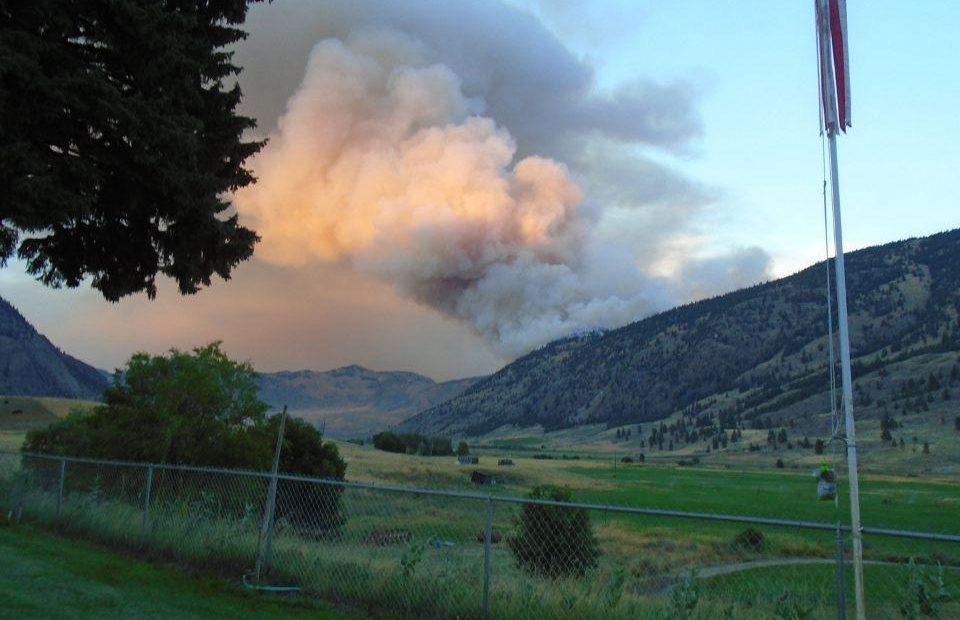 Firefighters are working to contain a large fire in north-central Washington. So far, the Palmer Fire has burned at least 11,000 acres and forced evacuations as winds pushed flames forward.

It’s expected to grow, pushing north, in the coming days.

Crews have been battling extreme fire behavior over the last few days, protecting property and people since the Palmer Fire first started on Tuesday, Aug. 18. It’s burning southeast of Oroville in Okanogan County.

Fire managers say crews have made “decent” progress on the fire’s southern edge – building in lines to stop its spread.

Winds continue to push flames north toward the Canadian border, which prompted Level 3 “get out now” evacuations near Palmer Lake.

“That’s going to really help our crews to build that line around the fire and stop it’s progression,” Hoygaard said Thursday afternoon.

The footprint of the Palmer Fire burn area between Palmer Lake and Waanacut Lake southwest of Oroville, as of Aug. 20, 2020. Courtesy of InciWeb

But winds are predicted to pick up Friday, pushing the fire north and making it harder to fight in difficult terrain, according to state fire meteorologist Josh Clark. Forecasts show sustained winds up to 20 mph, with gusts from 25 to 40 mph in the late afternoon and evening Friday.

“Winds and terrain will align to make the flow of wind a lot worse,” Clark said.

Relative humidity will be slightly up, which helps make fire behavior less extreme, but it’s not that much better than it has been the past couple days, Clark said.

A big concern is that vegetation is ready to burn. Clark says the region where the Palmer Fire is burning is “missing four inches of rain” since last October. With “exceptional” dryness, the last month has seen only 10% of normal precipitation. Combine that with much warmer temperatures in the last several weeks.

“Our vegetation in that area, our grasses, our shrubs, and even our timber are trending below normal in regards to their moisture content,” he said. “So they’re all much drier than we would see this time of year in a normal fire season.”

Smoke is expected to shift from the east toward Spokane to northward toward British Columbia. Winds from the southwest will push smoke from Oregon.

British Columbia fire agencies are aware that the Palmer Fire is heading toward the U.S.-Canada border. Hoygaard says firefighters north of the border will traditionally make a line to help stop the fire’s progression, once they’re aware it’s heading that way.

With large fires across the West and difficulties with the COVID-19 pandemic, initial attack forces had been stretched thin on the Palmer Fire. National Guard troops were able to help firefighting efforts after Gov. Jay Inlsee signed an emergency declaration Wednesday.

“On our fire, we got additional aerial resources,” Hoygaard said. “Forty-eight hours (after it began), we have a lot of crews right now. We’ve gotten a lot of crews from around the region to help combat this fire.”

Hoygaard said crews hope to catch the north end of the fire. If that doesn’t happen, more Level 3 evacuations may be necessary.

Fire managers will know more after about the number of homes and buildings that have burned after Thursday evening.