Before Labor Day, The Northwest Fire Season Hadn’t Been ‘So Bad.’ Then… What Happened?

Nearly 300,000 acres in Washington burned in just one day over Labor Day weekend. That is almost unfathomable. But it happened. Why?

In late August on NWPB’s Uniquely NW News, we talked with correspondent Courtney Flatt about how the 2020 fire season hadn’t been too bad. Yes, there’d been plenty of fires, a few big ones, but nothing too extreme and not much loss of homes compared to some past years like 2014 and 2015.

What were the conditions that made for that explosive situation? Were they a one-time anomaly or are they more likely to keep happening? Flatt covers fires, the environment and natural resources. She joined Uniquely NW News again, a few days after the explosive Labor Day weekend fires that have burned hundreds of homes in Washington, thousands in Oregon and continue to affect the region with thick smoke. Watch the full segment above (or here on YouTube).

The governors of Washington, Oregon and California have all brought up climate change as a contributing factor that needs urgent attention. Fire and forest scientists are clear that there are long-term effects on the region’s forest health and susceptibility to large fires. 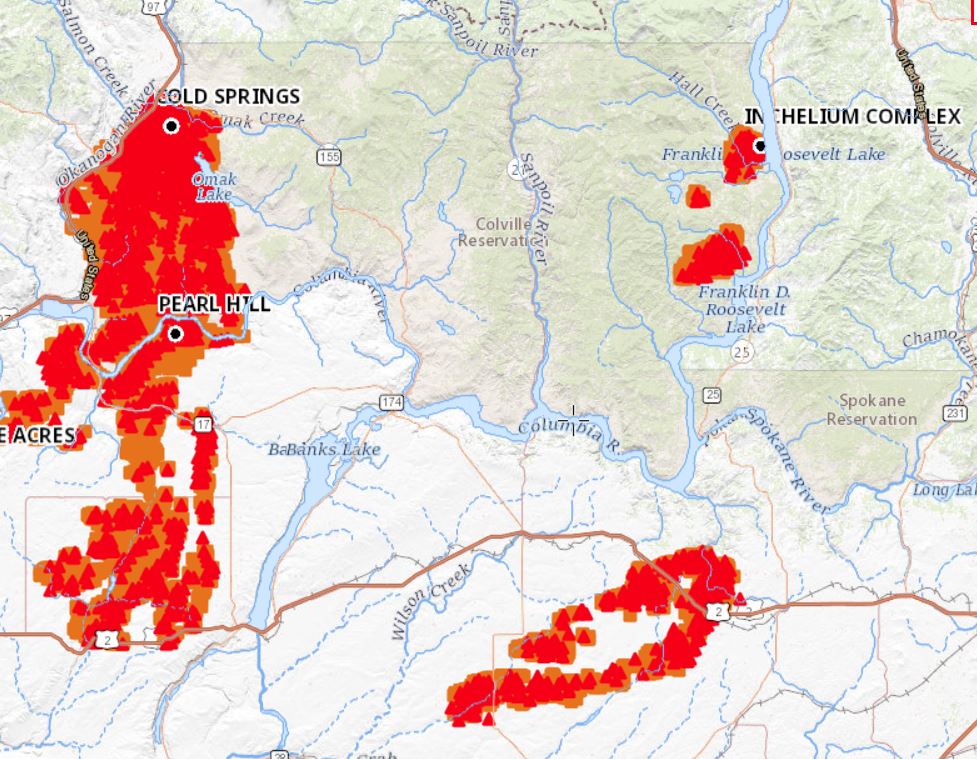 The reservation of the Colville Confederated Tribes is bound on several sides by the Columbia River. The Cold Springs Fire spread across its western side on Labor Day 2020, while smaller timber fires broke out around Inchelium on the eastern side. This approximate fire map shows heat sources from early on Sept. 8, 2020. CREDIT: GIS Surfer/MappingSupport.com

“You can’t really attribute any one event to climate change, but climate change is going to make fire seasons longer and more severe. And one of the researchers I spoke to said a big reason that this is going to happen is because forests are going to be dryer and ready to burn,” Flatt said on the program, recorded on Sept. 10. “And there are a lot of things that contribute to forest dryness, things like the timing of snow pack, spring and summer precipitation and heat and all that’s going to change with climate change. So that just means that our wet forests are going to burn more often. Kind of like what we’re seeing on the western side of the state right now – that could maybe become more of a new normal.”

On whether conditions suddenly changed or whether the powder keg was packed and just needed a spark:

Things were already really bad. And by that, I mean the vegetation throughout Washington, the stuff that burns and fuels wildfires was really, really dry. Then on Labor Day, really strong winds pushed through the area. Forecasters knew this was going to happen and they pleaded with people to not start wildfires over the holiday weekend. And then on Sunday and Monday (September 6 and 7) fires were started and it was just really impossible for firefighters to catch once the winds pushed through.

On how climate change enters into the conversation:

You can’t really attribute any one event to climate change, but climate change is going to make fire seasons longer and more severe. And one of the researchers I spoke to said a big reason that this is going to happen is because forests are going to be dryer and ready to burn. And there are a lot of things that contribute to forest dryness, things of the timing of snow pack, spring and summer precipitation and heat and all that’s going to change with climate change. So that just means that our wet forests are going to burn more off and kind of like what we’re seeing on the western side of the state right now that could maybe become more of a new normal. Another thing to note is that all of after all of that said less is known about that means for our large rangeland fires.

On whether this was an anomaly of a year or whether later in the season bad fire events may become more normal:

This year is really unusual that fires are ramping up now. Typically, in September, crews are starting to breathe a little easier and they’re not really trying to catch fires as much as manage them, even though there are some fires that can start in September, as we saw that didn’t happen this year and forecasters say this year in particular. What we’re going to need is a lot more precipitation to get back to new normal. And probably it’ll be a while for an end of fire season storm that will kind of stop things and help calm things down. And in the long-term fire seasons are going to be longer as the climate changes. And so we probably long term, we’ll see more fires this time of year.

On what some of the lessons will be going forward for fire managers and everyone in the region:

Officials are calling this a really historic and unprecedented event, but one thing that they are comparing it to is a really infamous fire season, which is often referred to as the “Big Burn.” And it happened in 1910 that are more than 100 fires were started kind of at the beginning of the Summer, as trains went through a really dry forests and sparked fires. Then in August, hurricane-force winds pushed through the area and just made everything go out of control in Montana and Northern Idaho. In the end, 86 people died and more than 3 million acres were burned. And in the aftermath that kind of really shaped our forest management practices and our firefighting practices that we’ve seen up until today. It ushered in an era of about 100 years of keeping fire off of the land. And that sort of fire suppression has led to really large wildfires that we’ve seen across the West. When that’s combined with people living near fire prone areas, what’s more droughts, really hot fire seasons. It can just all combine for this like perfect storm that creates really critical conditions, especially when weather like we saw on Labor Day pushes through with really strong winds that just fan up little lambs and make things go out of control.

On the comparisons to the 2014 and 2015 fire seasons, and the policy changes that came out of those years that may be employed now:

After the 2014 and 2015 fire seasons, the (Washington) state Department of Natural Resources created a Wildland Fire Protection Plan. There are a lot of parts of this plan, but one part is to create healthier forests. There are a lot of areas that are really dense and that will need thinning and more prescribed burns. That’s fire that works like a naturally would to get rid of excessive brush and debris that fuel fires, this makes fires more resilient. Fire is really often good and needed on the landscape, but it’s these extremely hot and destructive wildfires fueled by too much vegetation that threatened people and property.

And so another part of this plan is to make communities more “firewise” that’s things like protecting your property, keeping vegetation that’s flammable away from your houses, putting fire resistant roofing, like metal shingles on top of your house, keeping flammable material off of your decks and porches. And then there’s also a third prong to this, which is getting more funding for our wild land firefighting capabilities. And after this fire season, that’s something that politicians are already starting to push for more funding right now for these sorts of things. And then one final thing that is really kind of related to what’s going on right now is that officials are hoping to reduce unwanted human-caused fires. That could be anything from chains on the back of a car dragging along the highway, creating sparks or people doing target practice. And what happened on Labor Day is that all of these fires, most of them are probably going to be human caused. A fire officials are still investigating exactly what happened, but there’s really one common factor. And that was people.