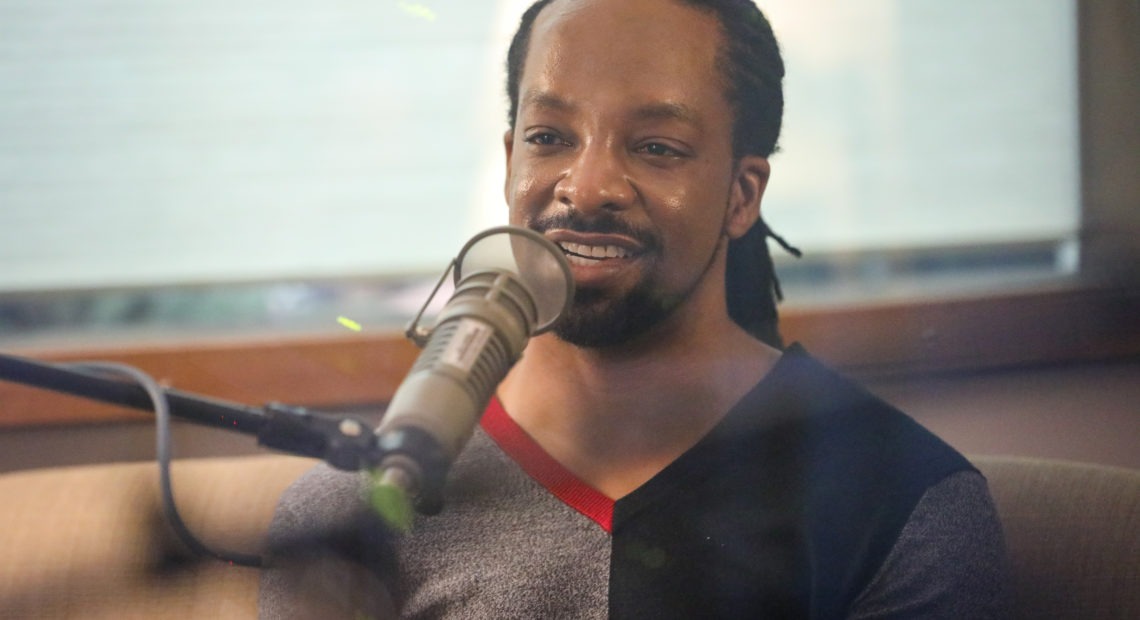 In this episode of Traverse Talks with Sueann Ramella, poet Jericho Brown shares how growing up in a Black church exposed him to the art of performative poetry at a young age and how that propelled him to dedicate his life to poetry starting in his early twenties. Ramella and Brown talk about everything from the importance of a name, speaking the truth, finding happiness in the imperfect and realizing that poetry doesn’t always have a second message. Brown is a Pulitzer Prize-winning author and professor at Emory University. Listen to his episode below or stream Traverse Talks with Sueann Ramella, wherever you get your podcasts.

How Time Has Changed His Writing:

Sueann Ramella: Tell us about your writing journey from 2008 until now. And how have you grown and developed over the years? 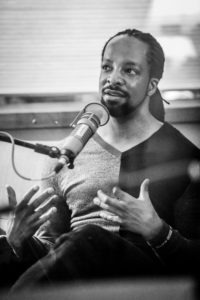 Pulitzer Prize-winning poet and author Jericho Brown in the NWPB studios in February 2020.

Jericho Brown: I just think when I was first starting to write, I wanted to make a poem and any poem that I could possibly make. I was sort of thinking about poems as performances, little bitty performances. You know how like if you watch a TV show or an award show, as opposed to seeing a full concert, you only see a singer sing one song. And I kept thinking of a book of poetry as one song, after one song, after one song, after one song and  going on and on. I don’t think that’s left me, I am still interested in that lyric, that one song embodied in each poem, but I’m also much more interested in telling the truth and making sure that I’m telling the truth. I think that’s the big difference between where I started and where I am now. Whenever I’m revising the poems, I’m also asking myself what I had to say and whether or not I said it right. And whether or not I told the truth. And that’s really, what I hope I’m doing in this book in a way that I may have done intuitively or instinctually in the first two books, but much more purposefully in this one.

Sueann: You honed your craft.

Jericho: I hope so. Yeah.

Sueann: In the poem Hustle you wrote, “In our house, lived three men with one name and all three fought or ran. I left Nelson Demery the third for Jericho Brown, a name I earned in prison.” Tell me about that time in your life and what it means to you now.

Jericho: Well, those lines are quite honestly, about the fact that I grew up a third and I had a father and a grandfather with the same name, which was always strange. It’s funny, when my poems first started coming out, part of the reason I changed my name was the fact they had this name on them that I didn’t feel like was completely mine. And I wanted a name that I knew was only my name on my poems. Maybe I wouldn’t feel that way now, but at the time, it was very important to me to be able to stake a claim on my own work as mine and not as the result of my father or my grandfather. So changing my name and seeing a new name on them, helped free me in a lot of ways. I could create this brand new life based around this person that I had become, but also that person could write Nelson Demery’s stories without feeling any kind of shame or guilt about them.

Sueann: There are cultures where changing your name is part of just growing up, not so much in mainstream America, would you recommend to people that they changed their name? 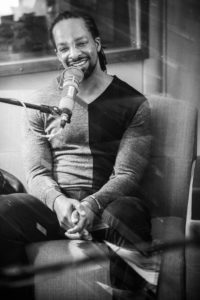 Jericho Brown smiles during the recording of “Traverse Talks with Sueann Ramella.”

Jericho:  I don’t know if I would recommend it, but I recommend that you be happy. So if you imagine changing your name is going to be a catalyst for your happiness, or if you don’t like the way your name sounds now. Yeah, sure. Change it. Why not? I think it’s a good idea to do what you need to do for you and that you recognize what you need to do for you and not what you need to do to control other people. It seems to me that changing one’s name is definitely something you can do that doesn’t control or put boundaries or limitations around other people’s lives.

The Energy of Reading Poems Aloud:

Sueann: When you give a reading, do you feel the audience’s energy? What’s the atmosphere like for you, because you’re opening yourself up?

Jericho: Well, it’s always best when there’s a certain kind of a back and forth. An interaction with the audience, which is obviously silent, but it feels different at different places, but you can sort of feel when an audience is on your side and when they’re looking forward to you and when they’re really listening. And you can also feel when you’re speaking to someone as if in conversation, as opposed to speaking at someone.

Sueann: And tell me the difference between reading for a black audience.

Jericho: Oh, that’s interesting. Well, when I read and it’s black people or mostly black people there are sounds. I mean, you can actually imagine, it’s just very black. If I had to make a metaphor and it’s a really good one, people make noise.

Jericho: Yeah. So when I read for other audiences, the more quiet they are often means that I’m doing better. I have your attention. Whereas some audiences, I know I’m doing better because they are physically reacting. I grew up in the black church. And when you were a kid, you learned to speak in front of people pretty early. We weren’t allowed to be shy. I mean, from the point that you could speak, from two or three years old, you had to say, Jesus wet, you had to give a speech or you had to recite a poem or you had to do something. And that happened every month. And no matter what you said, when you said it, from one side of the room to the other, because you were a kid saying it, people would be screaming in the middle of you talking. So I learned pretty early the power of words. That’s why, when people say spoken word, they mean spoken word, the word. And that, that word and the word gets different reactions from different people. 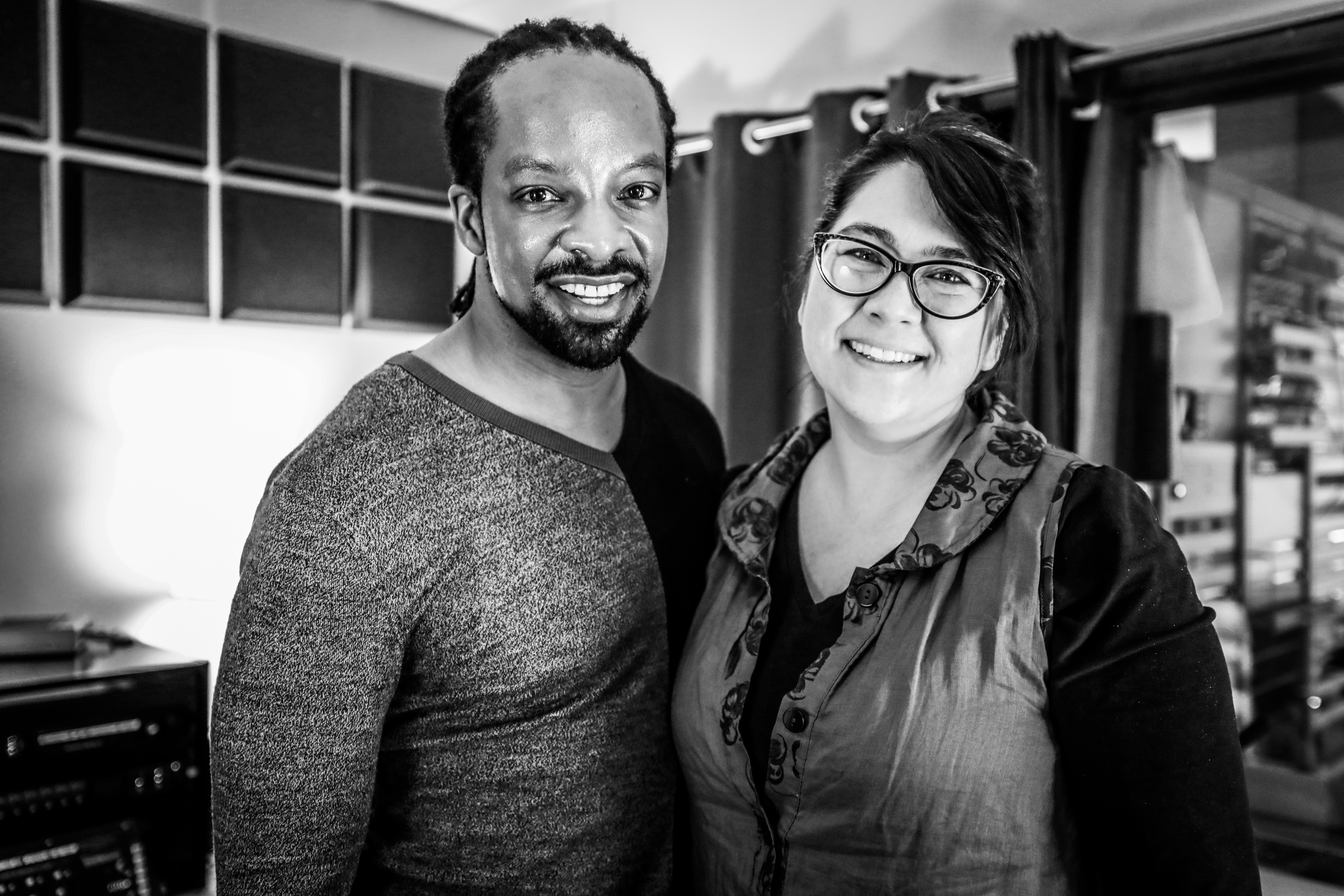 Jericho Brown, left, and Sueann Ramella on February 27, 2020 after recording the episode in the NWPB studios in Pullman, Washington.