When you cross paths with a wild animal, oftentimes you notice it and recognize it by name. Can you do the same with plants? Rich Old can. He has a PhD in plant science from the University of Idaho and has been identifying plants for the College of Agriculture at Washington State University since 1976. Now, he can identify plants from just the smell or by looking at the hairs on leaf fragments. In this episode of ‘Traverse Talks’ with Sueann Ramella, Rich shares his knowledge about plants, specifically native plants. Together, the two theorize about why people know far less about plants than they do about moving species and wonder whether people would be more inclined to protect native species if they knew more about them. Listen to learn more about botany on the Palouse and the rich history of Steptoe Butte.

Conservation – What’s In It For Us?

Sueann Ramella: I know this is a silly question, but why should we care about endangered species of plants?

Rich Old: Well, the usual argument is, well, they might be medicinal. They might help save humanity at some time. There is a wonderful quote that says, “The ultimate in ignorance is to ask, ‘What’s it good for?'”

Sueann: Yes. Because it’s so ego-centric, centered on the human.

Sueann: Ugh. But that’s what we keep fighting against. So just because, “What’s in it for me?” that’s not the reason you can serve. You can serve for a greater purpose, which is all of humanity, all of the planet.

Rich: And it was botanists on the project. The current species list for Steptoe Butte is over 340 species. Which considering that it’s a very small unit area of land, that’s a tremendous diversity of species. Partly because the Palouse is there, but partly because it has all four: north, south, east and west aspects to it. So all the different ecosystems. 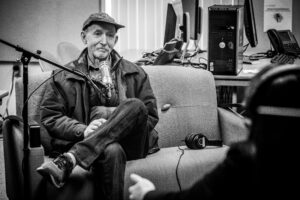 Rich smiles across from Sueann.

Sueann: Wow. I had no idea.

We Are The Weeds:

Rich: What’s the definition of a weed Sueann?

Rich: An unwanted plant. So, when they’re building a logging road on the north side of Dworshak Reservoir, and there’s a rare and endangered monkey flower there, they don’t want it there. So all of a sudden, the rare and endangered plant is a weed by that definition, because it’s unwanted.

Rich: Well, that doesn’t do as much good, does it? When people would send me plants to identify, the question always was, “Is this a weed?” Now, if the definition of a weed is an unwanted plant or a plant out of place, then I have to say, “Gee, I don’t know. Do you want it?” Or “Gee, I don’t know. Was it out of place?” So I need some kind of definition of a weed that I can actually answer. If they send me a dandelion … Yes, it’s a weed. I don’t care if you can smoke it, drink it, eat it, whatever. I don’t care if you want it. It’s still a weed. Being a weed has nothing at all to do with being wanted or unwanted. So weeds are invasive, aggressive, highly reproductive, mobile, pre-adapted to disturbance, phenotypically plastic and generally non-native. Now take all those traits and apply it. What organism is the weediest organism on the face of the planet?

Rich: When I was an undergraduate in botany, there was a speaker by the name of Warren Wagner who came to campus and spoke to us about plants that were considered to be extinct. And his message was that some of these plants are not extinct, we just haven’t looked hard enough for them. And I got all fired up and I thought, “I’m gonna go find myself an extinct plant.” So I picked out a plant, and I looked it up in the herbarium. It’s a library of pressed plants. So it tells you where they were collected throughout time. 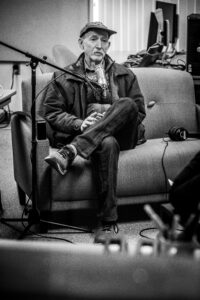 Rich at the recording studio in Pullman, WA.

Rich: So I went back and I looked at all the places this plant had ever been collected, and I visited all of them. And they’d all been plowed under because this plant likes rich, deep soils. Well, at this point in time, I was teaching these continuing education courses, and we were coming back from Rock Lake, and we were on our way home, and we’re driving along … and all of a sudden I slammed on the brakes and the car slid sideways. And I leaped out of the car and went running across the road. Because there was the plant. And it was there because it was on a narrow strip between the highway and the railroad.

Rich: So it wasn’t a big enough patch to have ever been grazed or to ever been plowed. So it was actually protected by those rights of way. And that was the first time that that plant had been found in almost a hundred years. So, between Pullman and Moscow, the Chipman Trail is on an old rail bed, and it parallels the highway. And there was a little strip that had been protected by being between the highway and the railroad. And it had been there in all its glory for decades. And I was driving to Moscow one day and it had been sprayed. And there were four wheeler tracks right through the middle of it. So I went to the newspaper and talked about this. And eventually ended up contacting WSDOT who said, “Well yeah, we sprayed that ’cause well, we didn’t know what it was, so we thought we should probably kill it.” They didn’t know what it was because it was native wildflowers that you don’t see very much. When it comes to invasive species, we’re dealing with an informational vacuum. Newly invasive weeds are my particular field of interest and expertise. And when I report a new weed, which means we didn’t know it was here before. This is the first report. And we then go back and do survey work, and do our homework and learn everything we can about it. On average, those plants have been here 30 years and occupy 10,000 acres, which means it’s too late to get rid of them by the time we know that they’re here because people don’t see them because they see brown and green instead of plants.

Sueann: Wow. It really is being exposed to it and working with it so that you could learn and identify easier.