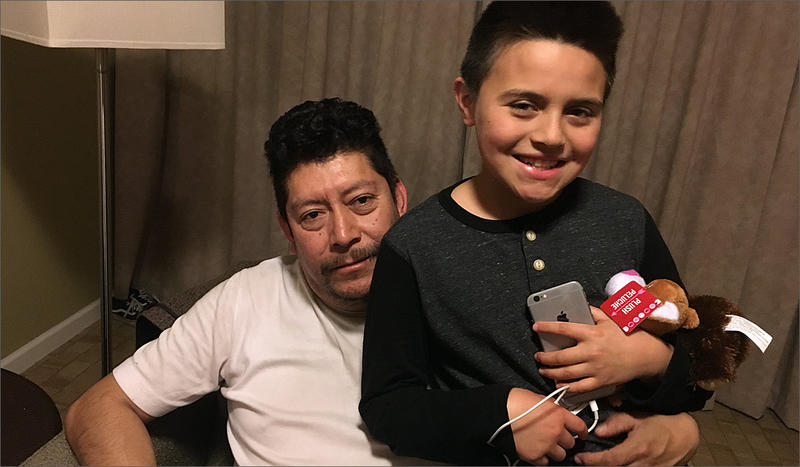 Note: This story was co-reported by Esmy Jimenez and Anna King, in collaboration with the Northwest News Network.

The emergency is over for now at Rattlesnake Ridge near Yakima. The state says a major, sudden landslide is no longer imminent and Yakima County has lifted its evacuation order and told residents they can move back home near the slide area.

But that’s easier said than done.

Six children scramble out of their rooms at the Ledgestone Hotel in Yakima. They head downstairs while it’s still dark outside. The kids wait sleepily just inside the door. They rush out as they see a familiar sight: a yellow school bus.

This bus has been picking up the kids displaced by the Rattlesnake Ridge landslide for nearly a month. They say that as some families have found other places to live or found room with relatives, their friends on this bus have been dwindling.

Ramon Mendoza is a 10-year-old student who’s waiting at this new location. He counts on his fingers.

“There was a lot [of kids] but now they found houses,” he said “Only three families left, like one, two, three. Only three left.”

The families displaced by the slide didn’t expect to be in a hotel this long. Columbia Asphalt & Gravel owns the quarry at the base of the landslide and offered to pay for five weeks of housing.

“I’m broke,” he said. “And the places I’m looking for rent— they ask me for the first month, security deposit, and the last month.”

Martinez—who works construction most of the year—said he doesn’t have a lot of cash on hand, or pay stubs to show in winter, a common theme for seasonal workers.

Living in a hotel room with his four children and wife has been tough. They have trouble cooking on the two small burners of the kitchenette.

“I feel like I’m in a tuna package, you know,” he said scrunching up his shoulders and arms. “All squishy. But I try to take this easiest as possible because I don’t have any choice.”

That’s why Martinez was relieved when emergency officials declared the landslide crisis over. He was excited to return home to the sliver of land at the base of Rattlesnake Ridge. He paid just $500 a month for a trailer there.

“I never had the chance to look for some other place to rent because I live happy there (near the slide area). They’re good, they’re comfortable,” Martinez said of the trailers he and others rent.

But then he learned the slide was still moving, that the land could continue to slowly slide, for weeks, even years. And he and his family had to be ready to leave at a moment’s notice.

Martinez said if it’s really safe to return, why aren’t the nearby Columbia Asphalt & Gravel workers going back?

“It’s simple. Obviously it’s not safe,” he insisted. “Well, I’m not going back. No matter what [government officials] tell me. I’m not going to come back.”

County officials lifted the evacuation order because of a report by Wyllie and Norrish Rock Engineers for the Washington State Department of Transportation. That study gave insight into the most likely scenarios facing residents and commuters driving on Interstate 82.

The chances of a fast-moving landslide are less than 5 percent. Most likely, the landslide will continue to move at a “slow and deliberate rate” meaning rocks will fall into the quarry space and the load will eventually settle.

If Martinez and others don’t move back, that’s also a hardship for Nathan Dills, 31. He’s the owner of the rental units near the slide, and also has a family to provide for. He said there are 13 trailers and two apartments on his property near Rattlesnake Ridge.

“People need low-income housing,”Dills said. “And if it wasn’t there, I don’t know where they think everybody would go,”

The emergency evacuation order happened at the beginning of 2018, so Dills hasn’t collected any rent for January or February. He bought this property from his parents. If it weren’t for that, he might be late on his payments. 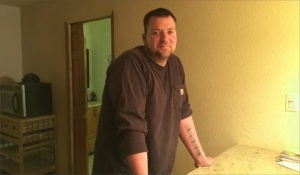 Things have been tough for Nathan Dills of Moxee, Washington, too. His more than a dozen rental units are standing empty for two months ever since the evacuations for the Rattlesnake Ridge landslide. CREDIT: ANNA KING

Dills worries that new renters will shy away as long as the land is still sliding. And he said Columbia Asphalt & Gravel had promised him they’d cover his expenses. He twice faxed over documents to Columbia. He offered a lease for the rental units with an option to buy. Dills said he hasn’t heard back. And he’s frustrated.

“I feel like I cooperated, done everything I said I would do,” Dills said.

Columbia quarry spokesman KC Klosterman declined to speak on air for this story, but did say they got back to Dills. Klosterman said Columbia and Dills couldn’t reach an agreement. And until the Washington Department of Natural Resources gives the go-ahead, the quarry remains closed for the foreseeable future.

Time Is Closing In

As for the evacuated residents: Six families have found permanent homes through the Northwest Community Action Center. Others are still waiting to hear back on their affordable housing applications.

Columbia Asphalt says those still in the hotel will not get a paid extension beyond Monday, February 12.

For Martinez and his displaced children, he said there are friends and family that have offered help. But he worries they’re struggling, too.

“I know these people and how tight they’re living,” Martinez said. “I don’t want to be another rock on top of them.”

Martinez and other residents don’t want to go back to their homes near the slide. Money and time are running out—checkout time is at noon on Monday. And landlord Dills worries what the future holds for his rental properties. 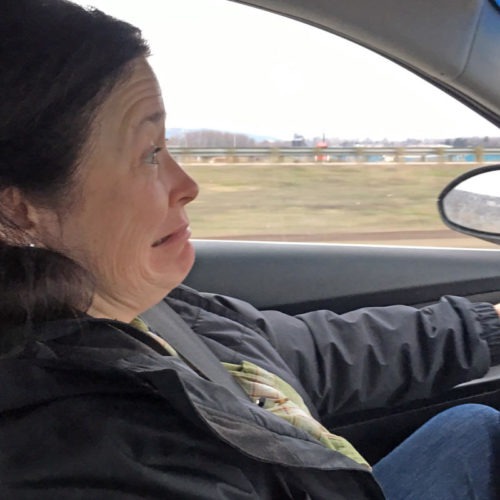