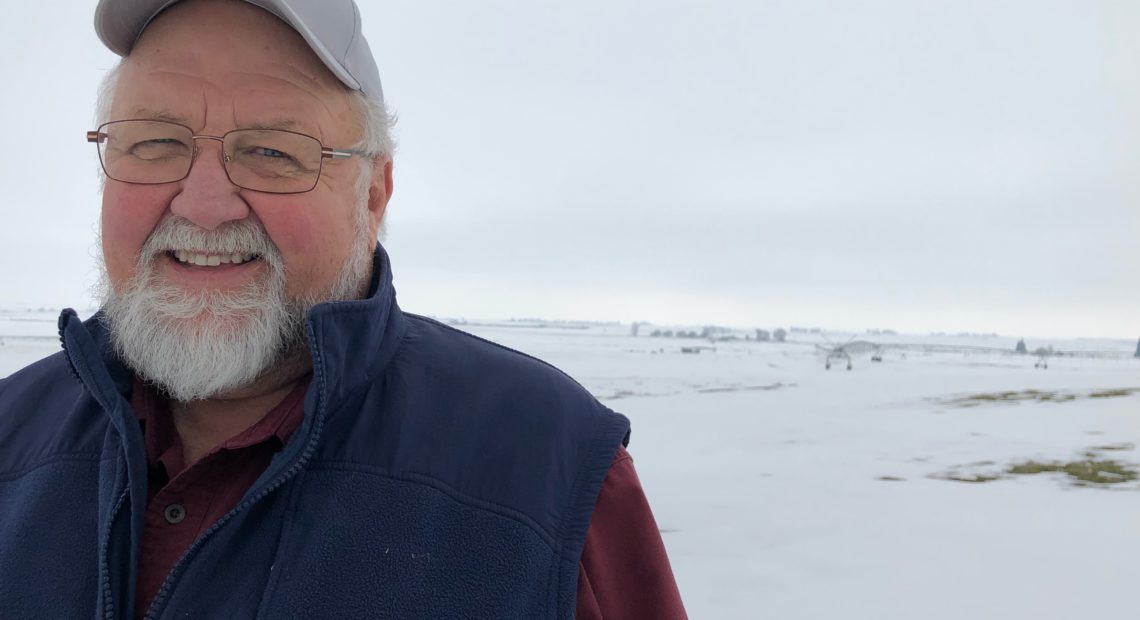 Circle irrigation pivot lines fan out in the distance — dark skeletons against the dirty snow and matching sky.

Ed Schneider has grown french-fry-making spuds here near Pasco, Wash., for 40 years. But this year America’s fries are on the line.

Recently, he walked out in the snow to see the scope of the problem.

“I mean this is unheard of,” he says. “We usually plant the last couple days of February, and for sure going by March 1. There’s been some other years when we’re delayed three – four days, but never four weeks.”

The fertile fields in Washington and Oregon, are just now drying out from severe winter snows not seen for 100 years. And potato farmers like Schneider are a month behind in planting. A cool spring — along with this late start — could throw Schneider’s yields off 30 to 40 percent. 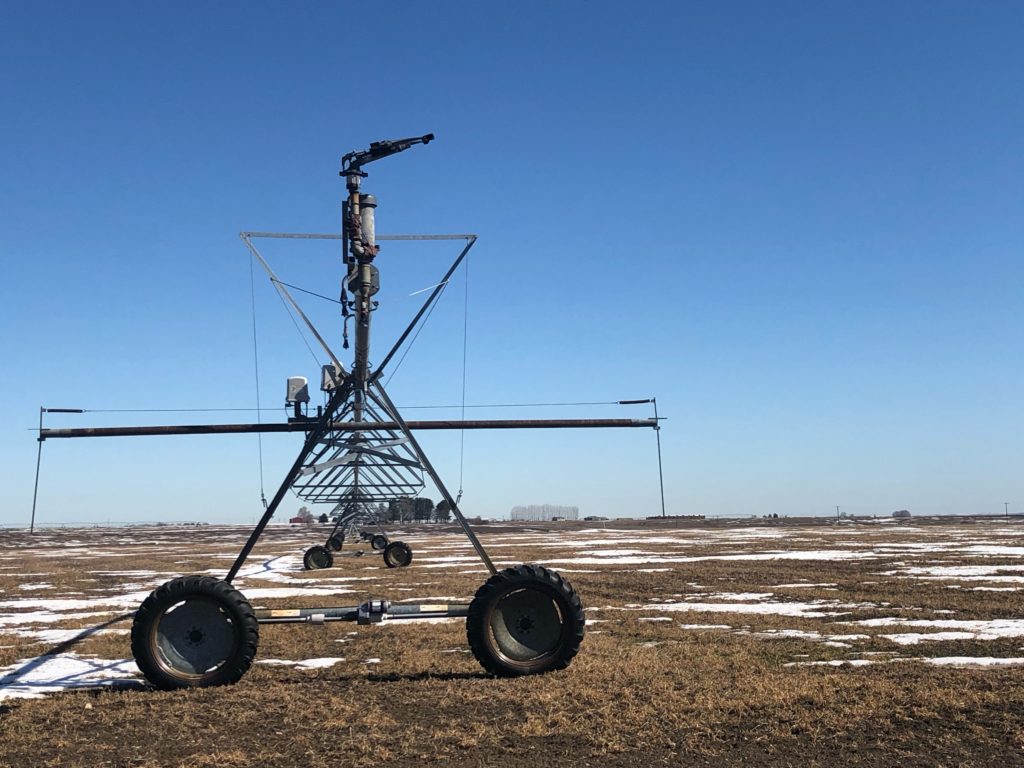 A irrigation pivot and field stands still on a spring day outside of Moses Lake. Potato farmers who grow as much as 70 percent of the nation’s French fries and processed potatoes are four weeks late in planting this year due to record winter weather. CREDIT: ANNA KING/N3

Potatoes are on a precise and tight growing schedule. Northwest farmers grow about 70 percent of the potatoes for the nation’s french fries and processed potatoes like hash browns and tots. Plus lot’s more for export to the Pacific Rim and other countries. And processors here will churn through the remainder of last year’s potatoes around July.

To feed the crispy-golden demand, nearly all Northwest potato growers sign a contract with their processors setting out a harvest day. Farmers are paid by the ton for whatever comes out of the ground at that time.

“It’s scary because your livelihood is on the line here,” says Chris Voigt, who heads the Washington State Potato Commission in Moses Lake.

So if potatoes come out small because they haven’t had a full growing season, farmers don’t make as much money. This year, the late-planted spuds will likely weigh less — and that dunks these spud farmers in hot oil.

Losing up to 40 percent of their yields is a lot of risk. Schneider and other farmers put around $4,000 to $5,000 per acre into land rentals, seed, chemicals, fuel and crews. And many of those expenditures have already happened this year — like renting the expensive fertile ground and signing growing contracts — so spud farmers are locked in. And in this mild area of the country, few potato growers carry crop insurance for weather like this. Voigt says even a 20 percent loss in yields can do serious damage to a farmer’s business.

“A 20 percent loss is you’re in the red,” Voigt says. “You know your kids are not going to college this year if you run across something like that.”

One worry: That processors will start digging fields early, and then have to dig even more fields early because the tonnage will be light on all of them, causing a cascading effect of early dig days.

Voigt says there aren’t a lot of extra potatoes from last year to fill in the gap.

Many Midwest and Eastern states and even parts of Canada lost lots of potatoes last year thanks to freezing temperatures. So Northwest farmers shipped many of the extra potatoes they had from their last crop to those areas. And now those are gone. 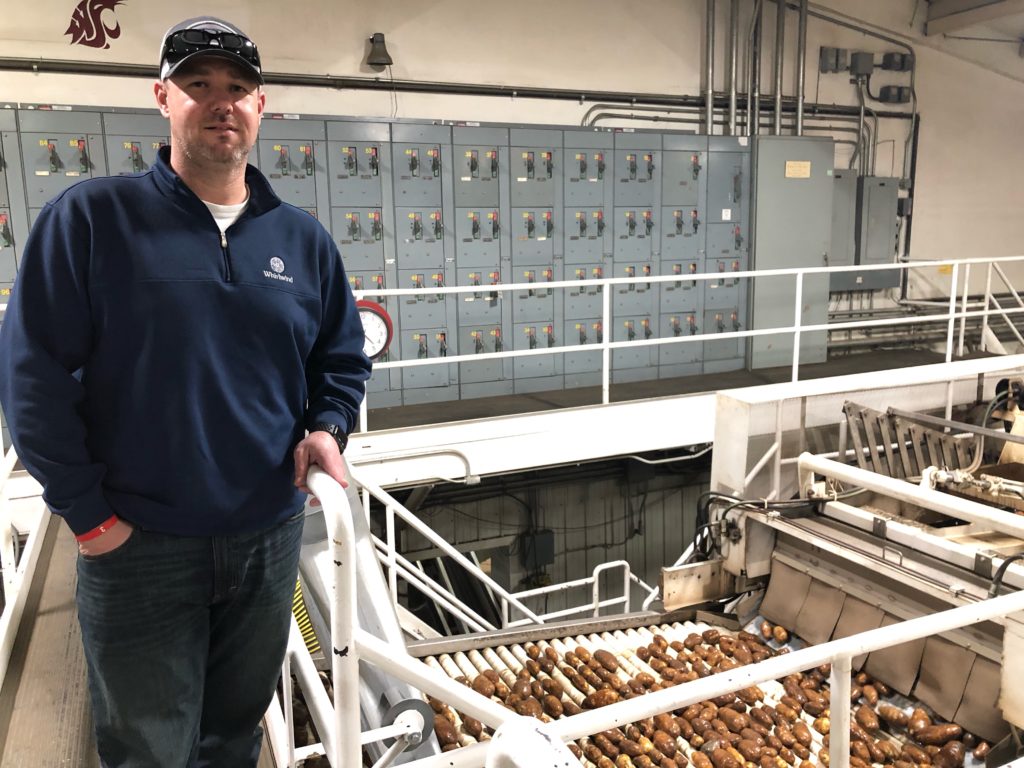 Jared Balcom, 45, is a fourth-generation potato farmer and packer in Pasco, Wash. He’s hoping a warm spring will help catch their crops up so they can meet their yields and set contracts with processing plants and fresh potato customers. CREDIT: ANNA KING/N3

Voigt says processors typically hold 34 days worth of frozen fries at the ready — but by July those processors might start running low.

“So let’s say you have to dip into your freezer to meet demand, and you go from 34 days down to like 28 days,” Voigt explains. “Dipping into the 20s, even though there is still 28 days of french fries available for the rest of the country. You could experience some spot shortages, just because it’s gonna take some time to get potatoes from Pasco, Washington or french fries to Miami, Florida.”

Another problem for growers is that there might not be the trucks, tractors and work crews available to get three months work — plowing, fertilizing and seeding — done in just one month now. So just the bulk of work — and a shortage of equipment — might further delay planting.

In downtown Pasco, potatoes bump along a belt — where they are washed with dozens of sprayers, sized and bagged for supermarkets. 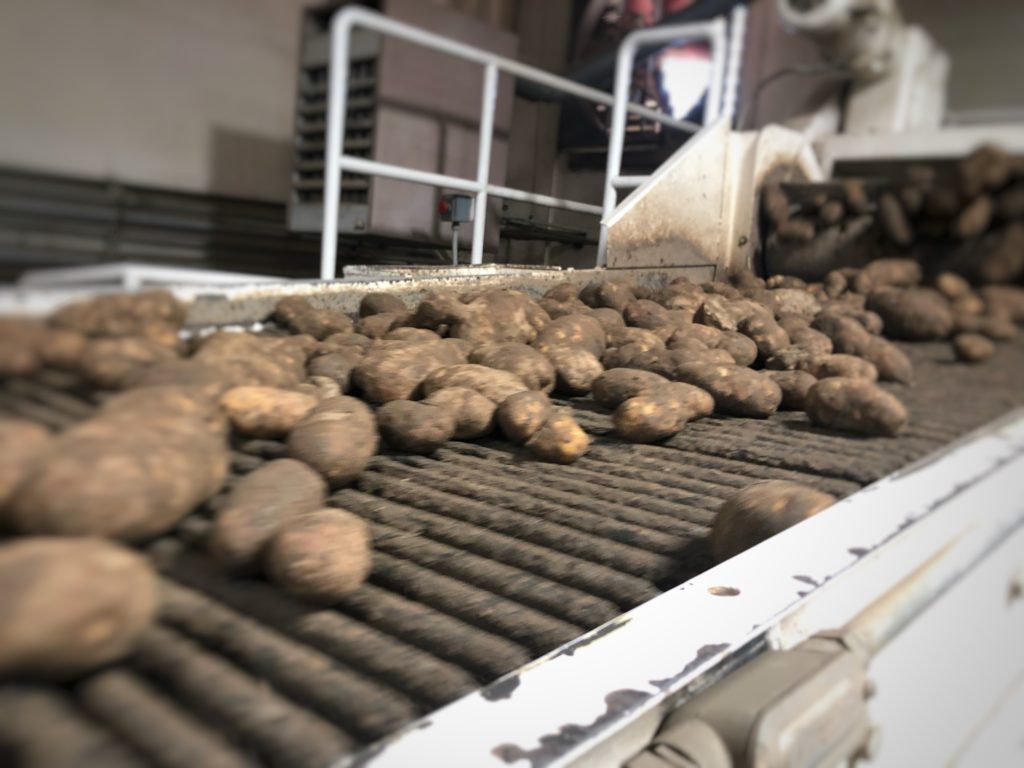 Potatoes scoot by on fast belts at Balcom & Moe in Pasco. The potatoes get a rinse, are sized and then put in bags destined for America’s supermarkets. The potato farmer and packer-shipper has been in business since the 1920’s.
CREDIT: ANNA KING/N3

“When we’re done pulling out of storage, we try to meter that out,” he says. “Then we have to come out of the fields to meet our customers’ demands.”

With customers and contract deadlines the new crop just can’t be late.

“We need to have a really nice spring and a really nice summer from Mother Nature to make sure our crop finishes out the way it’s supposed to,” Balcom says.

Huge risk is a large part of a farmer’s job. But many potato farmers here say they’ve never seen planting start this late.