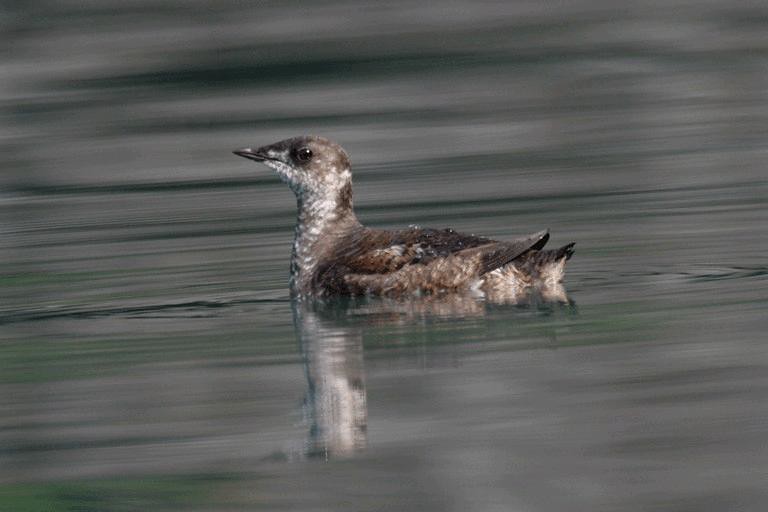 The Fight For Legacy Forests – Part 4: How A Bird Touched Off Court Battles

NWPB’s Lauren Gallup continues her series “The Fight For Legacy Forests” with a look at how concerns about habitat for a bird species may have touched off the latest fight / Runtime – 9:49

The marbled murrelet is a seabird listed as a threatened species under the Endangered Species Act.

In a way, this bird, and the decisions made by the Department of Natural Resources to protect it, might be where all the recent ruckus around timber sales originated.

In 2019, the DNR completed their conservation strategy for the murrelet, as part of their Habitat Conservation Plan. This was a commitment that had been made when the HCP was completed in 1997, explains Vince Harke of the United States Fish and Wildlife Service.

“When the HCP was originally signed and agreed upon in 1997, there was a clause, they were operating under an interim strategy for murrelet,” Harke says.

Harke, a supervisory biologist with the fish and wildlife service, says the plan was to complete a finalized strategy in five years for the species, but it obviously took a little longer than that.

But wait — what is the HCP and what does it have to do with timber? Well, let’s have Harke explain.

“The Habitat Conservation Plan, HCP, is a management plan that describes how the department will manage, basically, how they’re managing their lands and how specifically, what aspects of that program will be applied to species conservation,” Harke says.

Basically, the DNR manages land for timber harvest that interacts with species that need to be protected. So the HCP created a conservation plan for the spotted owl, several salmon species, and the murrelet. Approval of this is a federal act — that’s where Harke comes in.

Under section seven of the federal Endangered Species Act, the fish and wildlife service is directed to evaluate their programs, so they issue a biological opinion of what the broader impact on species being conserved would be with implementation of the HCP, Harke says.

This then gives the DNR a layout of how to manage their lands.

“They know that those conservation measures are going to be, stick consistent over time, and that they’re not going to have to change their endangered species protection policies every time they want to do an individual timber sale,” Harke says.

Based on the conservation guidelines in the HCP, the DNR then projected the amounts of forests in different stand categories, or stages of development, based on the management requirements for the year 2097, 100 years after its implementation, something we’ll get into more in future stories in this series.

Back to the murrelet. When the DNR completed its strategy for the bird, this changed which lands were being conserved, and therefore, which were available for timber harvests.

“That murrelet conservation strategy did change the areas that were conserved in the HCP,” Harke says.

With a finalized strategy, Harke says this is going to change the projections for forest stand development.

Let’s bring in Angus Brodie, deputy supervisor for state uplands for the DNR, for a little more clarification:

“Some of these mature stands that we’re starting now to harvest were, exactly, were reserved for an extended period of time.”

Hear Brodie’s explanation exactly? That’s his agreement that the DNR set aside land for potential conservation before finalizing the murrelet strategy, that they have now determined does not need to be conserved, and is therefore available for harvest – and most of that is older growth.

“What we’ve done is taken younger stands that would maybe be available for harvest, but now are not, and we said, ‘Okay, we’re gonna grow those for a longer period of time. And that is going to benefit the murrelett in those specific landscapes.’ And the trade off has been the release of some of these other acres, across the landscape,” Brodie says.

Brodie says this is the landscape conservation approach of the DNR, with consultation of the fish and wildlife service. The murrelet strategy wasn’t completed at the same time as the rest of the HCP because Brodie says they didn’t have sufficient research and information on the species.

So now that it is finalized, and has been approved by the Board of Natural Resources, Kenny Ocker of the DNR explained that, the way it’s designed, it creates focus areas where habitat is protected, in larger, concentrated clumps within the Olympic Peninsula, Northwest and Southwest Washington. The strategy took some of the younger stands in these areas and protected them, as they were determined to be the best areas to conserve as part of this long term strategy.

That means some older forests that had been held while waiting for the strategy to be finalized, and have now been determined to be unnecessary for murrelet conservation, might be coming available for harvest — which might explain why there’s been so many protested sales of older forests in recent years.

Harke from the fish and wildlife service explained in a memo to NWPB that they’ve conserved some younger forest area as “security forest.” While these areas aren’t expected to become nesting habitat, they provide a buffer and larger areas of contiguous forest, which is attractive to the species.

In the memo, Harke also said that prior to adoption of the marbled murrelet strategy, over 560,000 acres of DNR land on the west side of the state was conserved and with the amendment, it is now over 600,000.

According to Harke’s memo, about 38,000 acres were released that had been held potentially for marbled murrelet conservation, most of which he classified as “second-growth” or “70-120 years old.”

But interestingly, the conservation strategy the DNR chose actually will result in fewer of the species over time, says Paula Sweedeen, policy director for Conservation Northwest.

Sweedeen worked for the DNR on the original 1997 HCP and worked on a science team for the department on the murrelet strategy 10 years later, says the best kind of forests for these birds are ones that are older and structurally complex.

Sweedeen says forest habitats where there’s variety in tree height, allowing for gaps in the canopy, like in old-growth or naturally regenerated forests, are important for this species, which travels from salt water for feeding.

Also crucial is that there is a contiguous, large swath of this habitat, and that is located no more than 50 miles away from salt water.

Sweedeen says the finalized plan from 2019 hits on some of these goals, but not all of them. The department hired population modelers to look at the different proposed strategies, and the one they chose, is also one that results in fewer murrelets over time.

“So the strategy that they chose that DNR chose, actually ends up with fewer murreletts, according to this model, fewer murreletts on DNR land 50 years from now, or when the HCP is over, than they have now,” Sweden says.

Yes, you heard that right. The DNR’s conservation strategy for marbled murrelets results in fewer birds over time.

Harke from US Fish and Wildlife Services summarized this population modeling and its interpretation in a memo to NWPB.

In summary, the memo says that the marbled murrelet has been facing a decline in Washington that will likely continue for some time. There is not an exact count at this time of the bird. Conservation efforts have the potential to mitigate this and reverse this over time. Because of the take of some murrelet habitat for harvest, the HCP was created by the DNR to ensure appropriate measures to protect this species. While the murrelet population may see a decline on DNR lands, habitat protections provided by the HCP are expected to increase habitat for murrelets on DNR lands in the future.  The overall trend of increases in Oregon and California, as well as protection efforts on federal lands, will hopefully see a stabilization and potential increase overtime for the species.

Harke says estimates for murrelet populations are done by counting the species at sea.

Sweedeen says they were disappointed with that choice, and wanted the department to go for a strategy that would have conserved an additional 38,000 acres. This strategy would have resulted in a population increase.

“We also knew that that alternative was unlikely to be selected, because it would have had too high of an impact on revenue generation. And, DNR’s ability to provide timber to local communities,” Sweden says.

This harkens back to the question of how the DNR interprets its need to manage the state trust lands for the maximum revenue benefit of specific trust beneficiaries, something that’s currently being decided by the state supreme court.

But what does this have to do with specific opposition over the last two or so years to timber sales? Now that some older forests have been reclassified, in other words, not needing to be conserved, some of them have gone up for sale. This may explain why members of the public are seeing older, perhaps so-called “legacy forests” being harvested.

Via email, Ocker from the DNR, said that over 2,100 acres of the 35,000 acres of western Washington timber sold since January 2020 were from habitat released by the adoption of the marbled murrelet amendment.

Ocker says it’s fair to say there’s been a lot of overlap between those forests that have been reclassified under this amendment, and the ones folks have raised issue with over the past two years.

Stephen Kropp, from the Center for Responsible Forestry, can point to at least three timber sales located in recently reclassified murrelet habitat.

Also in the next story we’ll address the projections that Harke, from the fish and wildlife service, mentioned the HCP made for trees in various stages of development by 2097 — and how disagreement over whether these are projections, or objectives, fits into the debate on timber sales.